How genes are edited using CRISPR-Cas9

“Where in the world could the first CRISPR baby be born?" asks a headline in the science journal Nature, as scientists across the world debate the ethics and future of this genome-editing tool that has taken the global scientific community by storm.

Molecular biologists Jennifer Doudna at the University of California (UC), Berkeley, and Emmanuelle Charpentier, now at the Max Planck Institute for Infection Biology in Berlin, published their initial study on CRISPR in 2012, and research into this technology has gathered momentum in the past three years.

Science magazine declared CRISPR the breakthrough technology of the year for 2015, taking into consideration the major strides in the application of the technology in that year. These included the creation of a “gene drive" designed to wipe out a variety of pests, the controversial editing of the DNA of human embryos by Chinese scientists, and the removal of 62 copies of a retrovirus DNA in the pig genome.

CRISPR is a technology that allows medical scientists to change DNA, the stuff of life, with greater precision than before. DNA can be repaired or even taken out using this technology.

DNA is the chemical that genes are made of and they carry important information about each individual. Manipulating DNA rather than genes—human beings are made of 20,000-25,000 genes—means the changes will be transmitted to the future generations, possibly forever. While this technology comes with the promise of treating—even eliminating—hereditary diseases, it also means that if you get it wrong, the mistake is also transmitted to future generations.

Last year, Chinese scientists surprised the world by announcing they had harnessed CRISPR to try and make changes to human embryos in a bid to modify the genes which cause the blood disorder beta-thalassemia. The Chinese scientists said they used ‘non-viable’ embryos, which cannot result in a live baby, obtained from local fertility clinics.

While countries such as Germany strictly limit experiments on human embryos—violations can be a criminal offence— in China, Japan, Ireland and India, the only unenforceable guidelines restrict genome editing in human embryos.

Gene editing is not a new concept and CRISPR-CAs9 is not the first technology for gene editing. Before CRISPR/Cas9, there were other gene-editing methods such as zinc finger nucleases (ZFNs) and transcription-activator-like effector nucleases (TALENs). CRISPR-Cas9 is considered revolutionary because of its ease of use and relatively high degree of precision. The precision is still a challenge though. 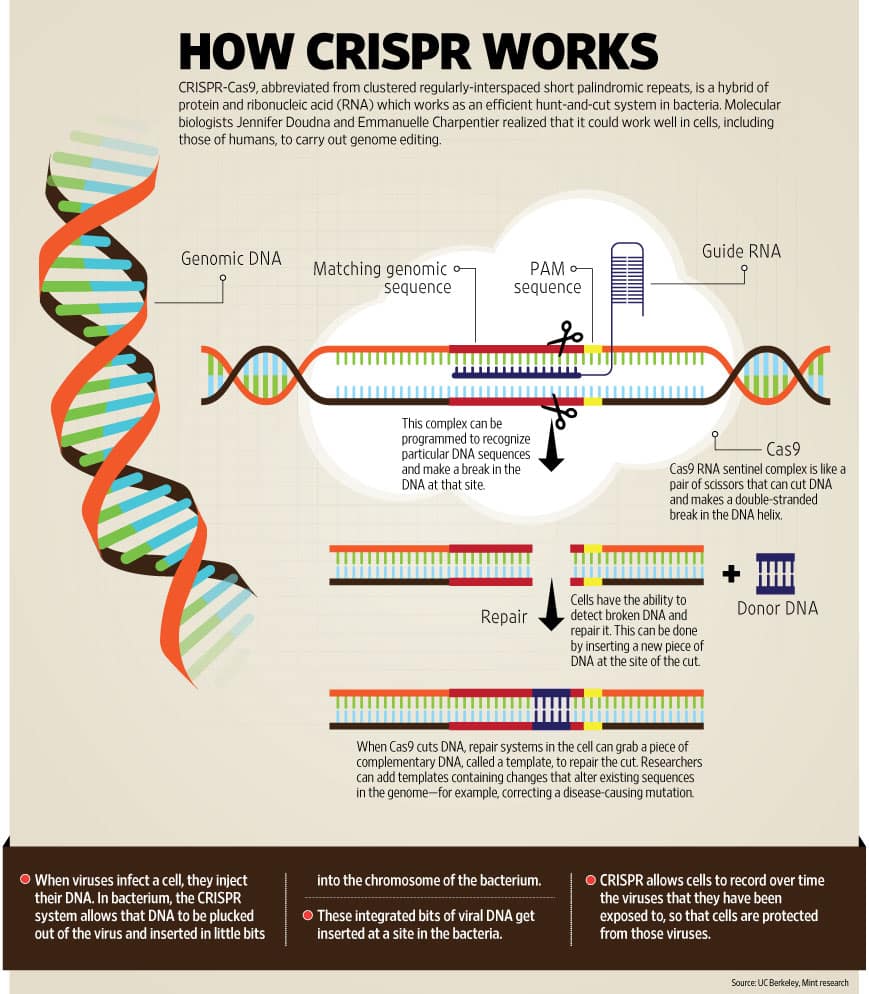 “The exciting thing about CRISPR-Cas9 is the promise of fixing genes in place in our genome, but the efficiency for that can be very low," said Jacob Corn, scientific director of the Innovative Genomics Initiative at UC Berkeley, in a statement earlier this month. “If you think of gene editing as a word processor, we know how to cut, but we need a more efficient way to paste and glue a new piece of DNA where we make the cut," Corn explained.

When Chinese scientists announced their application of the technology in April 2015, they said it was “too immature" and that serious obstacles remained.

However, earlier this month, UC Berkeley scientists in the US announced that they had made a major improvement in CRISPR-Cas9 technology that allows an unprecedented success rate of 60% when replacing a short stretch of DNA with another. The researchers said that the improved technique is especially useful for correcting genetic mutations that cause hereditary diseases, such as sickle-cell disease or severe combined immunodeficiency.