Will Modi’s target of doubling Brics trade by 2020 materialize?

Given the tepid global trade environment, hopes of doubling intra-Brics trade to $500 billion by 2020 appear unrealistic

On the concluding day of the 8th Brics Summit in Goa last week, Prime Minister Narendra Modi called upon leaders of the group of emerging economies to double the size of the intra-bloc trade to $500 billion by next five years.

“In 2015, intra-BRICS trade stood at about $250 billion. We should set ourselves a target to double this number to $500 billion by 2020," Modi said addressing the leaders’ plenary. Read More

A look at historical intra-Brics trade data suggests that the target is unlikely to materialise. Here’s why. For intra-Brics trade to increase to $500 billion by 2020, it would have to grow at a minimum of 12.7%. But between 2006 and 2015, annual average growth in trade between Brics countries was at 10.1%. The historical data should be read with the caveat that South Africa became a member of the block in December 2010. What makes Modi’s hopes look even more far-fetched is the fact that intra-Brics trade has been declining over the last two years. 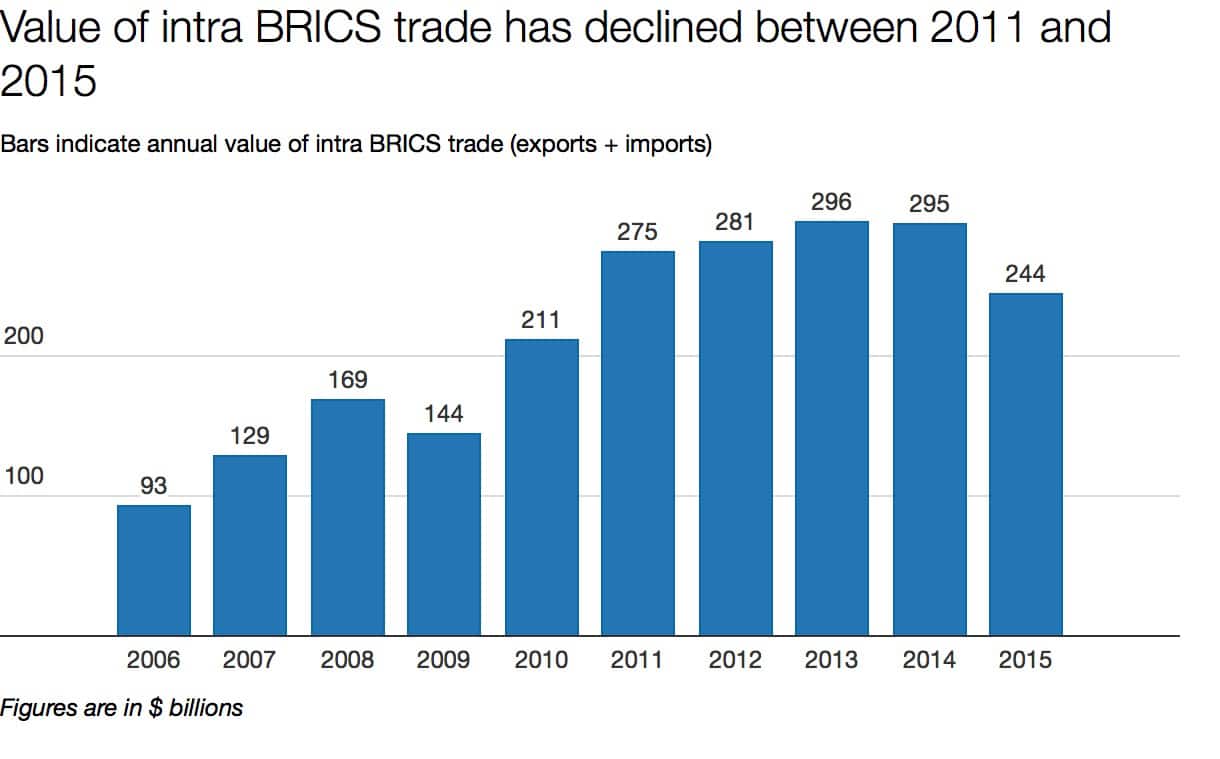 Matters are unlikely to improve in the near future given the fact that WTO’s recent projections for growth of global trade are not encouraging. The WTO revised its forecast of world trade growth for 2016 to just 1.7%, well below the April forecast of 2.8%. The forecast for 2017 has also been revised to grow between 1.8% and 3.1%, down from 3.6% previously. 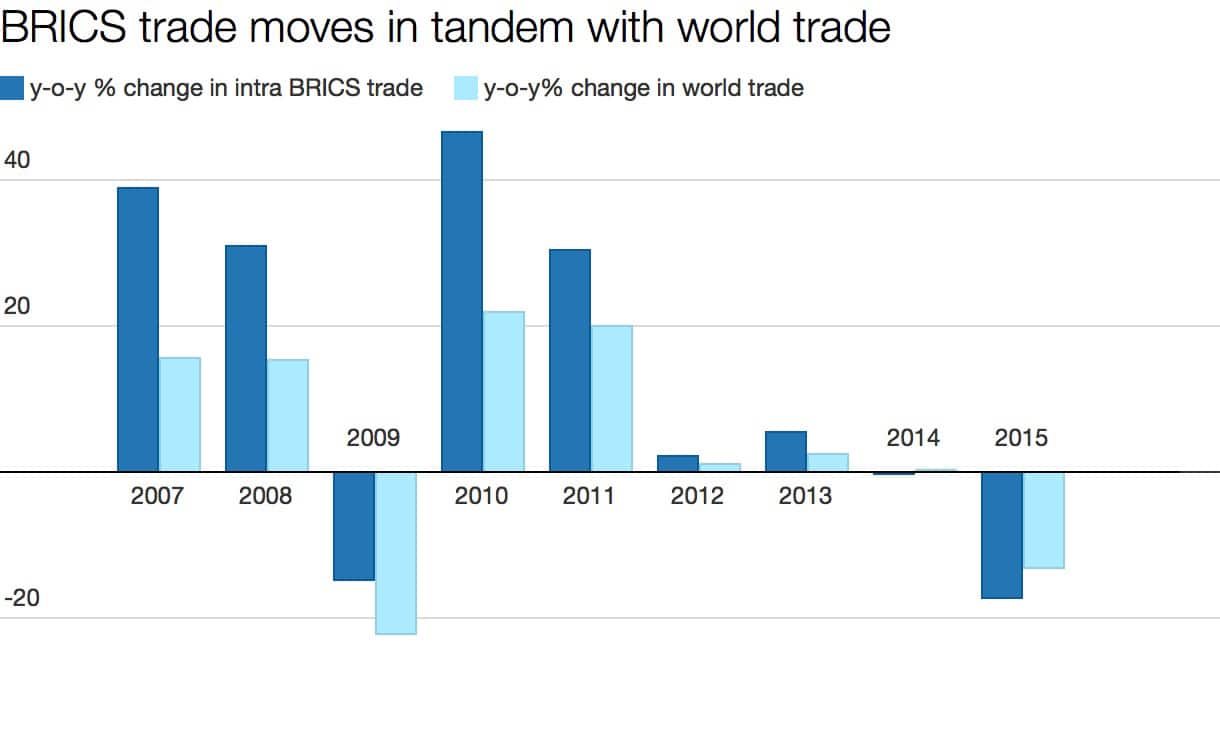 It is to be expected that Modi’s call for increasing intra-Brics trade was made with India’s export interests in mind. Here too, the numbers are not very encouraging. India’s export to Brics countries has shown an average annual growth of approximately 4% between 2006 and 2015. In contrast, import from its Brics peers has recorded an average increase of almost 14%. As is to be expected, imports from China made up for over 80% of India’s total imports from other Brics countries in 2015. Between 2006 and 2015, China’s share of total Brics imports by India increased from 74.4% to over 80%. 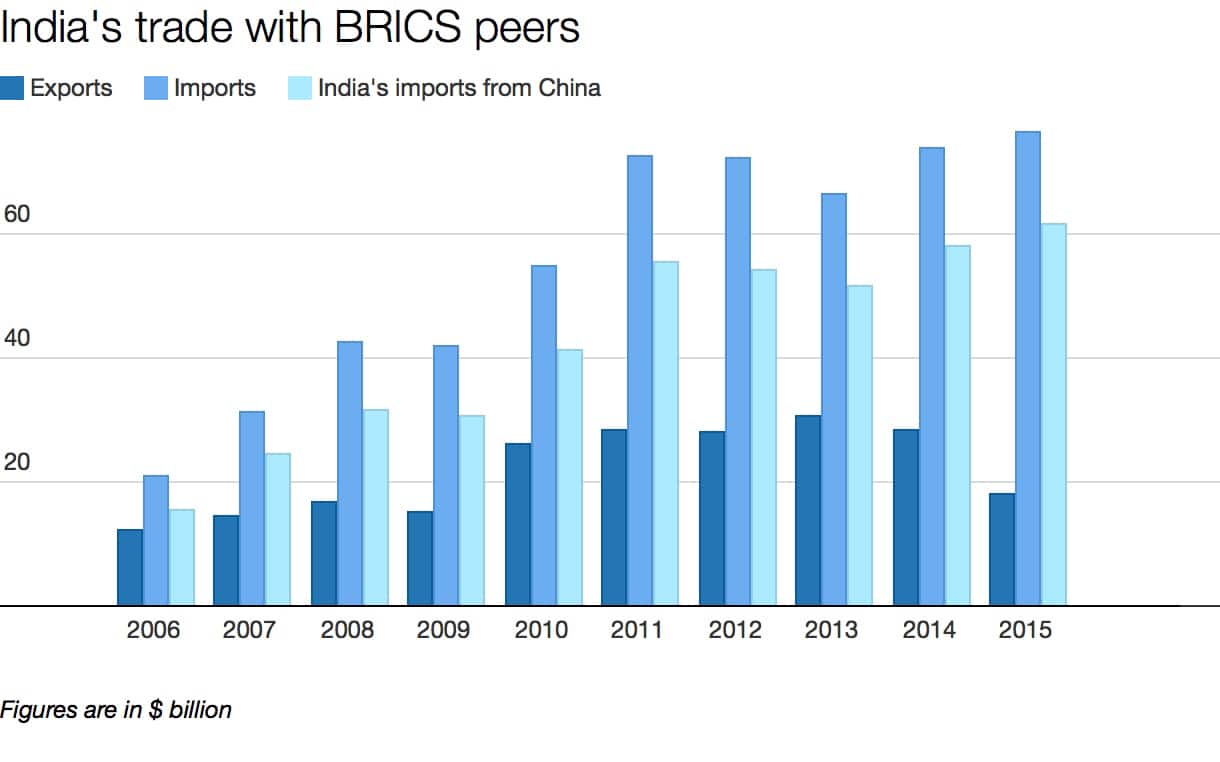 To gain economically from the Brics, India would need to increase its international competitiveness rather than hope for a mere doubling in the intra-group trade.