Berlin: European Central Bank policymakers said they have no wish to book a profit on Greek sovereign bonds the ECB holds and gave a green light on Wednesday for euro zone member states to pass on the funds to Greece.

Joerg Asmussen and Luc Coene both backed an idea floated by ECB president Mario Draghi last Thursday for the central bank to help Athens indirectly by relinquishing the bond profits - a move that could help Athens avoid a chaotic default.

Discussion is underway about how the central bank could book those profits up front, to provide an early lump sum for Greece, rather than seeing funds dribble in over years as the bonds it holds mature.

Asmussen told Reuters that while the ECB cannot contribute directly to a second Greek aid package, it would pass any profits from its sovereign bond purchases to central banks in euro zone states, which governments could then use for Greece. 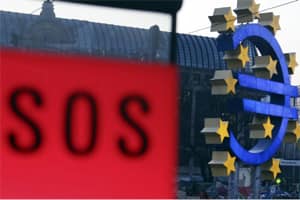 A “SOS sign sits an emergency phone box in front of a Euro sign sculpture near the European Central Bank’s (ECB) headquarters in Frankfurt, Germany. Bloomberg

Time is running out for Greece as it faces a chaotic default if it cannot meet €14.5 billion in debt repayments due on 20 March and its brinkmanship has forced some EU leaders to suggest Athens should leave the euro zone currency union.

“(The March redemption) is going to be challenging. The sums involved are quite high," said Societe Generale economist James Nixon. “If there is a widespread default, they’d need money to refund the banking sector, so I think the options for Greece, if there isn’t a bailout package, are pretty limited ... I can’t see how they’d get around it."

Asmussen said Greece can meet the conditions for finance ministers to agree a second aid package at their meeting next Monday, which would then permit a sovereign bond swap to be completed in time.

“If the Eurogroup (of euro zone finance ministers) is able to make a positive political decision next Monday, the bond swap with voluntary PSI (private sector involvement) can immediately begin and be completed in time," the German told Reuters.

The ECB has faced increasing political pressure to play a more direct role in helping Greece stabilise its finances and avoid a ruinous default.

Coene, Belgium’s central bank chief, said earlier the ECB had decided to distribute profits from Greek bonds to member states, which they could decide to pass on to Athens.

“What we have agreed in the Eurosystem is that we indeed do not wish to make a profit from the transactions with Greece and, when the profit from past years is distributed, each government will determine what proportion is due to Greece," Coene said.

“It is for the governments to decide what to do," he added.

Profits from the ECB’s bonds will only become available when the bonds mature, meaning the money is likely to come in in dribs and drabs over years rather than in one easy lump sum.

If the money was needed up front, however, the ECB could get round the problem by selling the bonds to the euro zone rescue fund, the EFSF, at their full value rather than the discount price it paid for them.

That would mean it could book the profits it was always set to make immediately and distribute the €10-15 billion that would create without delay.

ECB policymaker Jens Weidmann, who heads Germany’s influential Bundesbank, became the first of the bank’s top officials to back such a plan in an interview with German newspaper Handelsblatt.

Asked about selling the ECB’s government bonds to the EFSF, Weidmann said: “If there is a willingness from governments to buy these bonds off us then we definitely won’t refuse to talk," although he also added that there was no indication at present that governments were willing to go down that route.