New Delhi: Conflicting signals from recent economic data may not be significant and India’s economy is set to grow this fiscal year by around 8.5% as estimated by the government, say economists.

The volatile economic data are partly due to the consequences of the 2008 financial crisis and the changing structure of the economy, they said.

On Tuesday, the government announced that the monthly growth rate of factory output in August dropped to a 15-month low of 5.6%, suggesting a moderation in the growth trajectory. This followed Reserve Bank of India’s (RBI) announcement on 30 September that current account deficit in the April-June quarter expanded year-on-year by 204% to $13.7 billion.

Negative signals from these two sets of economic data run counter to internal data of the income tax department. The department’s data show that direct tax collection in the first half of fiscal 2011 (April-September) was about Rs1.82 trillion, higher by 19% over the corresponding period of the previous year.

The first half’s collection was about 42% of this fiscal year’s budget estimate of Rs4.30 trillion, in line with collection trends seen in any year when tax inflows are on target, said a senior tax official, who did not want to be named.

The data at the end of the first half indicated companies had not changed their outlook for the year, the tax official said. Corporate tax collections (advance tax and tax deducted at source) grew 22% in the first half of the fiscal year to touch Rs1.22 trillion.

The August industrial output data was far short of the 9.65% forecast of a Reuters poll of analysts. 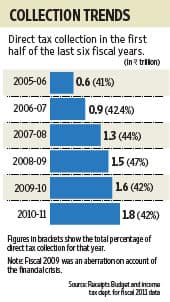 “In general, data in India is noisy. It doesn’t give a true signal," Shanto Ghosh, principal economist at Deloitte Touche Tohmatsu India Pvt. Ltd, said. Ghosh, too, stuck to his earlier forecast of 8.5% economic growth.

In the Indian context, Ghosh said projections went haywire in 2008 in the wake of the financial crisis. “Over one or two years, there is bound to be some instability in the data on account of the base effect. Overall, one should look at the trailing average to get information on the data," he said.

“I have started going according to averages rather than a single month’s data, particularly IIP (Index of Industrial Production)," Samiran Chakraborty, chief economist with Standard Chartered Bank, said.

“When there are short-term deviations around the trend line, it is not something most economists would bother with," Ghosh, said.

If economists are wary of marking down growth forecasts based on a single data point, some hypothesized that the recent data actually signalled positive changes in the economy’s underlying structure.

“Studying some of the underlying variables and structure, I get the sense that the manufacturing sector growth of the last (few) months is not just a one-time correction but the start of a new trajectory for Indian manufacturing," Basu told a press conference on recent economic developments on 17 September.

He did not elaborate on the variables that indicate a new trajectory.

“Manufacturing is the dark horse among growth drivers," Ghosh said.