Vaak, a newspaper that helps brush up ‘practical’ Sanskrit

Haridwar: More than three decades ago, when Buddha Dev Sharma was young and nervous about English, he subscribed to a newspaper in the language to overcome his fears. Every morning after the vendor delivered the edition, he would anxiously flip to the page featuring the puzzle box with a pencil and struggle with words. 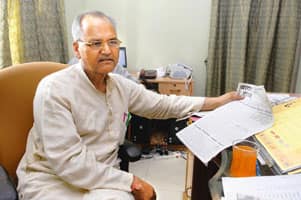 On some days, he filled a few blanks and on some days, none, and underlined difficult words for the dictionary until it was time for him to head to college, where he studied Sanskrit. With patience and dogged persistence, Sharma says he finally learnt English, a subject out of his undergraduate curriculum.

Sharma’s experiments with English, the language he seldom hoped to learn considering neither of his parents could read or write it, left a lesson for life: a newspaper was the best way to learn a language.

A decade later, he learnt another: to remember a language, one must make it the language of speech.

Also Read The first part of the two-part series

In 1977, when Sharma had enrolled as a research scholar in Sanskrit at the Sampurnanand Sanskrit University in Varanasi, he had little idea he could forget the language. A teaching job at a school in Uttarakhand resulted in a year-long break in his studies. When it was time to return to class, Sharma could read and write, but had forgotten to speak Sanskrit. “I was out for a year and in that period I forgot the language (Sanskrit). It was tragic," he remembers.

That is when, oscillating between acute despair and self-loathing, Sharma says the seeds for Vaak, the only Sanskrit newspaper in Uttarakhand, were perhaps sown in his being.

The state adopted the language as its second official language in January.

In the following years as his association with the language grew stronger, with his stints as a freelance writer with local newspapers in Haridwar and Dehradun, and later a teaching job in the subject at a government secondary school, Sharma took it upon himself to propagate the language he likes to call “practical Sanskrit".

“There was no better way to do it than publish a newspaper. Do you know I also did a diploma in Telugu language when I was teaching at a school in Bareilly, but because I didn’t speak it, I don’t remember even a wee bit of it now," he says, handing out several editions of the newspaper.

In the four colour pages in each edition, the fortnightly newspaper touches upon current affairs, a crossword puzzle and a column for general knowledge questions, the newspaper’s most popular section. The range of news is contemporary—the Copenhagen summit on climate change, political leadership changes in the Congress and the Bharatiya Janata Party, and the updates on Indian Premier League cricket matches.

The name Vaak, which means speech in English, is also in line with the purpose with which it was launched.

The first issue of Vaak came out in April 2002 and sold 500 copies. It was an eight-page issue and till a few hours before the launch, Sharma was making pages. He still does the same: he is the editor, desk, writer and publisher. “For more people, you need money. Who does it free of cost?"

Apart from advertisements from the Uttarakhand government, Vaak also received a grant of Rs50,000 from Rashtriya Sanskrit Sansthan, an apex body under the Union government for the promotion of Sanskrit, last year. “This year, too, they have promised assistance," Sharma says.

He still can’t pay for the Sanskrit news service of the Hindustan Samachar, a news agency.

Most Sanskrit newspapers in India, varying from weekly to fortnightly, have similar worries. Sudharma, the only daily newspaper in the language, has now gone online along with several others such as the Gujarat Samachar in Gujarati, the Malayala Manorama in Malayalam and Aajkaal in Bengali, to expand readership and access.

Today, Vaak, which has no online edition, has 1,600 dedicated subscribers for a paltry annual fee of Rs100 for 24 copies, while another 500-odd issues are distributed in Sanskrit universities and colleges across Uttarakhand, and through book stalls next to Har Ki Powdi, the bank of the Ganga in Haridwar where there is a large concentration of temples and priests.

Despite being published from Haridwar, the religious seat of the Hindus, Vaak’s readership is a curious mix of young men, students, housewives and priests.

Indu Bala, who stays at an old-age home in Haridwar, is a retired math teacher and a regular reader of Vaak. Eight years ago, when the newspaper was launched, she resolved to learn Sanskrit. “I learnt a great deal from Vaak," she says.

Today, she teaches the language to her fellow inmates at the old age home.

For Tara Dutt Awasthi, a lecturer of Sanskrit literature at Rishi Sanskrit College in Haridwar, who has stored every issue of the newspaper, Vaak is more than just a newspaper.

“I was at its inauguration. It has been a long journey, but not without achievements. There may be university journals in Sanskrit, but for simple news, there is only Vaak," he says. “Plus, it is a great feeling to read a newspaper in the language most think is only about prayers and religiosity."

Sharma, who has got busier with the promotion of the language as secretary of the Uttaranchal Sanskrit Academy, the state government body for promotion and propagation of Sanskrit in Uttarakhand, on a regular day sees an endless stream of visitors. When they leave, he boots his computer, wears his remarkable golden specs and stares at the QuarkXPress page.

Every day, he edits, writes and filters news. Bit by bit, he sustains the paper.