“Allowing FDI in multi-brand retail is one of the major issues in this sector. This could begin in a phased manner in the metros, with the cap at a lower level coupled with incentivising the existing ‘mom and pop´ stores (kirana shops) to modernise and compete effectively with the retail shops, foreign or domestic," the survey said. 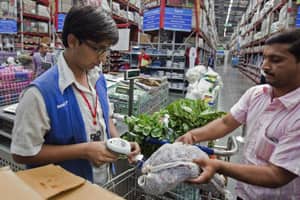 While agricultural marketing could improve immensely with the growth of modern retail trade, revenue to the government could also increase, as at present the retail sector is largely unorganised and has low tax compliance, it added.

As per IMG on inflation, FDI in multi-brand retail would help in developing a ‘farm-to-fork´ retail supply system, and addressing the investment gaps in post harvest infrastructure for agricultural produce, it said.

The government has, however, put a condition in respect of proposals involving FDI beyond 51%, making mandatory sourcing of at least 30% of the value of products sold from Indian ‘small industries/ village and cottage industries, artisans and craftsmen´.

“With a high GDP growth in the last five years, and high growth in consuming population, the retail business is of late being hailed as one of the sunrise sectors in the economy," the survey said.

A T Kearney, an international management consultancy firm, has identified India as one of the topmost retail destinations, it added.

“A sharp rise in prices of branded apparels, due to the imposition of 10.3% excise duty as well as a rise in prices of yarn and fabrics, led to lower consumer spending and this has hit the sales volumes of garment retailing companies," it said.