Kochi: Barely four months before elections to local bodies, the so-called rectification drive by the Communist Party of India (Marxist), or CPM, is finding little favour in Kerala, one of the three states the party governs, according to some party activists.

As part of the exercise aimed at re-establishing the party’s ideological moorings, at least 300,000 CPM activists in the state have been asked to fill a one-page document listing details of the property and jewellery owned by them and their relatives, and their sources of income. 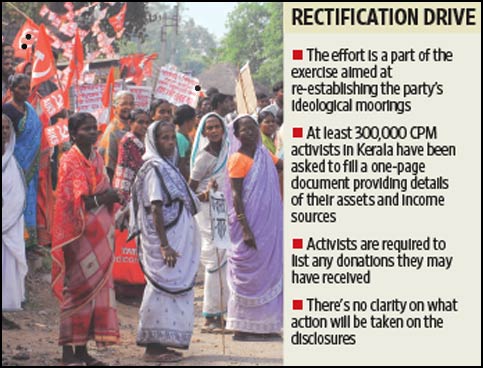 The rectification drive, requiring party leaders and cadre to disclose their personal assets, is an attempt at political and organizational course correction prompted by the CPM’s reverses in last year’s general election that some blamed on deviations from its core ideology.

There is still no clarity on what action, if any, will be taken on the disclosures sought by the party although some members say there could be random scrutiny of the data furnished.

A senior party leader associated with the CPM’s trade union wing, who insisted on anonymity, said there was little enthusiasm among party cadre for the rectification exercise.

“On (the) one side, the party speaks of simple lifestyle and not accepting hospitality extended by corporates and private groups, but it also needs to tell the cadre of who all abroad have made contributions for the Nayanar memorial; who all have sponsored flight tickets of several party leaders to various party meetings, etc.," he said.

The party had a few months ago launched a public campaign and collected more than Rs6 crore to acquire the land of a closed textile mill in the northern district of Kannur for a memorial to former late chief minister E.K. Nayanar.

A.V. Devan, a CPM member who is also active in the youth wing of the party in the central Kerala district of Thrissur, said most of the cadre at the lower rung does not take the exercise seriously. “There is so much written and spoken about party leaders flouting all norms and being close to the big business houses and collecting donations for setting up party offices and other memorials. During the real estate boom till a year ago, several party members were hand in glove with realtors and have got huge amounts as commission which is still unaccounted for."

Pinarayi Vijayan, state party secretary, declined to comment on when the rectification drive would be completed or how the party cadre had been responding to the initiative.

“This is not the time to give details and these can be given at some other convenient time," said Vijayan, who returned a week ago after a month-long tour of West Asia to raise funds from non-resident Indian organizations for the proposed Nayanar memorial.

The move also comes at a politically sensitive time: besides the September civic bodies’ elections, polls to the Kerala state assembly are scheduled for 2011. West Bengal, a Leftist bastion where the CPM experienced setbacks in last year’s general election, is also due to go to the polls next year.

The Congress party, the main opposition to the CPM in Kerala, is dismissive of the rectification drive.

“It is a mere eyewash," said Ramesh Chennithala, Kerala Pradesh Congress Committee president. “The CPM is no longer a party that stands for the ideals it has been championing over the years."