Chennai: If this were 1989, or indeed 1979 or even 1799, S. Sathyanarayanan would probably not possess the full head of hair he does today. Instead, he would have shaved the front half of his skull and then swept his remaining hair back to resemble a bulging half-moon, knotted loosely at the back—a distinctive do for a young Brahmin who would have been preparing to follow his father, his uncles and his cousins into a career of Hindu priesthood. 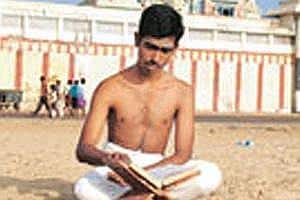 “We had to have our hair pulled back when we sat for our exams. It was the rule," he says. Sathya’s new look, though, fits right in at the Rajalakshmi Institute of Technology, where he has started an engineering degree, becoming the first in his family to attend college. Sathya turned 18 in July, just as he was completing seven years of Vedic education that came with a punishing schedule.

“Our Veda classes started at 4.30am and went till 7am," he says. “Then we had regular school from 9am to 4pm. Then more Veda classes from 4pm to 7pm, and then supervised independent study in school from 7pm to 9pm."