Ahead of the budget presentation on 28 February, all eyes are on finance minister P. Chidambaram, who has a track record of implementing ambitious tax policies while staying deeply committed to reforms and achieving fiscal consolidation without neglecting the government’s ambitious social programme outlays.

Our pre-budget survey focused on gauging the mood of tax and finance heads of leading Indian business houses and multinationals and individual taxpayers. A consistent theme emerging from the survey was the need for clarity, certainty and stability in the tax regime besides reforms and incentives for housing and infrastructure.

Thrust on reforms driven by an eye on tax collections

Nearly half the respondents expect the government to maintain its reforms thrust, including tabling the insurance Bill to loosen over-regulation in the sector. A majority is also hopeful that the government would prioritize infrastructure development by granting tax sops for development of low-cost affordable housing, and extending a tax holiday for power generation. 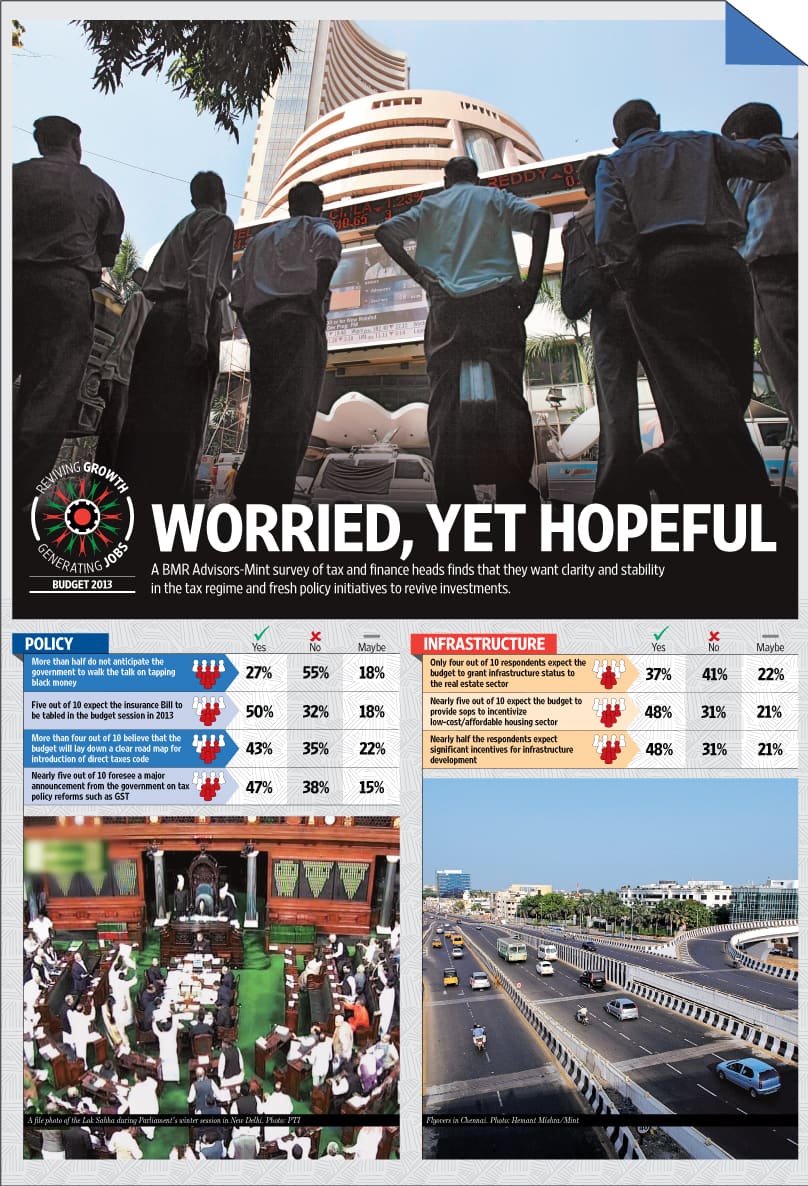 Businesses look forward to a stable tax regime; a majority of the respondents does not foresee an increase in either the rate of tax or surcharge and cess. An overwhelming majority expects the budget to articulate tax deduction provisions governing contributions towards corporate social responsibility initiatives.

Ghost of GAAR and retrospective provisions

Recent statements hinting at the acceptance of recommendations by the expert panel headed by Parthasarathi Shome on deferment of general anti-avoidance rules (GAAR) are likely to be followed up, boosting investor confidence. However, the question that concerns most is if the deferral of GAAR is adequate given the recent spate of high-pitched assessments and overdrive for tax collection. It remains to be seen if the budget yields to the panel’s recommendation on retrospective applicability of indirect transfer provisions as the Vodafone case continues to grab global headlines. Only four out of 10 respondents are hopeful of a respite by way of prospective applicability of indirect transfer provisions, though some feel that the finance minister may spring a surprise by bringing enabling provisions for settling the controversy on terms that are mutually acceptable.

Transfer pricing continues to be a key challenge for businesses, given the quantum of transfer-pricing adjustments and consequential tax effect taking its toll on multinationals and clogging tribunals and courts with disputes which can otherwise be amicably resolved by resorting to economic principles and alternative dispute resolution processes under tax treaties. As India’s advance pricing agreement (APA) mechanism takes off, it is becoming imperative for the finance ministry to lay down clear directives and guidelines for determining an acceptable range of arm’s length price in complex business scenarios. US investors are sceptical of India’s APA programme and are expecting greater clarity and certainty on settlement of transfer-pricing disputes under the treaty. Respondents are cautiously hopeful that an announcement of safe-harbour rules and acceptance of the N. Rangachary committee recommendations will feature; nearly half the respondents expect a definitive announcement on implementation of the rules.

The fate of the two most ambitious tax reforms—the direct taxes code (DTC) and the goods and services tax (GST)—continues to hang in the balance despite four years of effort since the government first took a stab at key fiscal reforms. The finance minister has reaffirmed his commitment to implementing DTC and GST and his confidence is echoed by a majority of the respondents expecting budget 2013 to lend greater clarity on a road map for implementation of both measures. Half the respondents seem to believe that a complete roll-out of GST and DTC is a long road ahead, looking at polls in 2014. My view is that the finance minister can well bring an amended DTC Bill in the monsoon session and expedite the DTC roll-out from April 2014.

Almost 49% of the respondents are expecting amendments in service tax law to remove ambiguities. Considering the nascent nature of the law, respondents are expecting amendments to lend clarity. Similarly, 40% of respondents expect the government to liberalize CENVAT (central value-added tax) credit scheme and make all inputs, capital goods and input services creditable given that on the output side almost all services are now liable to service tax.

Mukesh Butani is chairman of BMR Advisors, a consultancy.