Bangalore: Jagadish Shettar was elected as Karnataka chief minister on Tuesday by Bharatiya Janata Party (BJP) lawmakers. The event was delayed as political bargaining between two sections of the party continued over the final terms of the transfer of power from incumbent chief minister D.V. Sadananda Gowda.

The day began with a group of members of legislative assembly (MLAs) close to Sadananda Gowda presenting an additional set of demands before the central observers as a precondition to attend the legislative party meeting. On Tuesday morning, around 50 MLAs and members of the legislative council gathered at Gowda’s residence and made three demands to the central party observers who had arrived in Bangalore on Monday. 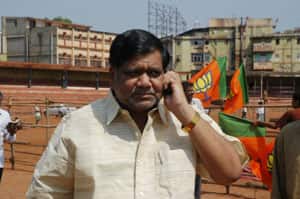 A file photo of Jagadish Shettar.

However, after being appeased by the party’s central observers, the legislative party meeting was finally held after being postponed twice. Gowda proposed Shettar for the chief minister’s post and was seconded by state party president Eshwarappa for the position.

On Sunday, Gowda submitted his resignation to BJP president Nitin Gadkari after the faction led by B.S. Yeddyurappa pushed for his removal.

Two BJP MLAs, speaking on condition of anonymity, said BJP central observers Arun Jaitley and Rajnath Singh have agreed to look into the demand of creation of two posts of deputy chief minister. On the appointment of Gowda as state party president, a decision will be taken by the party’s central leadership at New Delhi shortly, MLAs said.

The BJP also announced that a team comprising Shettar, Gowda and Eshwarappa will head to Delhi on Wednesday to hold further talks. “All appointments will be made in consultation with state and central party leaders," said Shettar.

The events have brought out the intense caste polarization within the party with Lingayat leaders Yeddyurappa and Shettar on one side and Vokkaliga leader Gowda on the other.

Shettar, who, like Yeddyurappa, is a Lingayat, was backed by the latter on the ground that the party would lose the upcoming assembly elections next year if a Lingayat was not at the helm. Lingayats constitute the largest community group in Karnataka, comprising 18% of the state’s population.

On Tuesday, Vokkaliga caste associations and religious leaders staged demonstrations in Bangalore, protesting the manner in which Gowda was forced to quit the chief minister’s post.