Has the Modi govt succeeded in unclogging stalled projects?

When the Narendra Modi-led government was sworn in mid-2014, there were great expectations from a government that had won a decisive mandate from the electorate.

Most investors expected the government to put an end to an era of policy paralysis and help kick-start a new wave of investments in the economy. So far, the record has been mixed, data from the Centre for Monitoring Indian Economy Pvt. Ltd (CMIE) shows.

While the number of new project announcements has gone up, so has the proportion of stalled projects.

A Mint analysis of CMIE capex figures shows that year-end stalled project figures for 2016 are at their highest levels since December 1995, making it the worst year-end on record.

The proportion of stalled projects rose to double digits in 2013, and those figures have consistently been in double digits since then. This holds true even if we consider data for each quarter rather than just the year-end figures. Four out of the worst five quarters with the highest stalling rate on record have been during the Modi government’s tenure.

It is worth noting that data on new project announcements only track a firm’s intention to invest. This means that the company may not yet have got the clearances it needs, or secured the funds required for executing the project. This is what has happened to nearly a fifth of all private sector projects, the data shows. 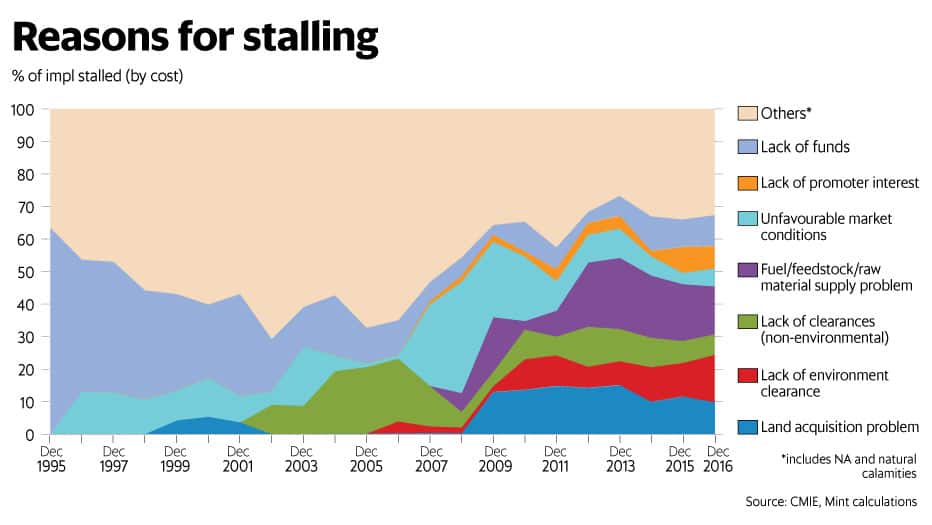 At a time when new project announcements seem to have taken a hit after the demonetisation announcement , it is imperative for the government to do its part in reviving the animal spirits of Indian industry. It can do so by raising the level of public investments, and by expediting clearances which continue to be the major hurdle in the path of new projects.

This is the first of a two-part data journalism series on capex spending in India. The next part will examine public spending on capex.