The epiphany hit Nisha Rajagopal one day in 2007, on a drive to her office. “You’re crazy," she remembers chiding herself that morning. “You don’t have to work. Nobody’s putting a gun to your head. Why are you making a mess of this?"

The minute she reached her office, she called her mother and announced: “I’m quitting today."

“What took you so long?" her mother replied instantly.

For two years, Nisha had balanced her job—as a human resources (HR) executive in a software company—with a burgeoning career as a classical music vocalist. It was, even at its best, a fine balance. Often, she was needed at her office until 3am, which would wreck her rehearsals and classes the next day. Concerts had to be scheduled for weekends. The stress built up. That day in 2007 was, she says, “not exactly an ‘Aha!’ moment. It was a cumulative thing, no doubt about it."

Oddly, Nisha’s fix was an echo of her mother’s predicament a few years earlier. Vasundhara Rajagopal, her daughter’s first teacher and a performer much in demand in her own right, was once a vice-president at a multinational company. “I was going through the same problem," she says. “I was bringing work home mentally, and I inevitably ended up compromising on my music. So I finally quit my job. I knew Nisha was struggling, but she had to take the decision herself." 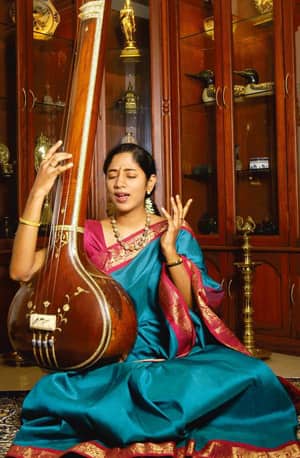 In tune: Nisha Rajagopal feels lucky that her parents are understanding about her passion for music. Sharp Image

The year leading up to Nisha’s graduation, in 2002, was a slow one for the economy and consequently for campus placements—bad news for many of her classmates but a curious stroke of good fortune for her. “I went for a couple of interviews, but really, not much was happening," she remembers. “A lot of people were heading for call centres, and a lot of people, after graduation, had to just sit at home."

During her four years in college, Nisha’s music had begun to approach something of a vocation. She had performed more concerts and grown more confident, though she realized a singer’s career would not yield the proverbial quick buck. “It’s always nice to have a pay cheque right after college, with quite a few zeroes at the end. It’s nice to be financially independent," she says. “But I have to credit my parents with saying that they’d support me financially, even if it took me a few years to get on my own feet."

Only a few years after graduation, when she worked that two-year HR stint, did Nisha feel the need for an orthodox job; even then, she says, she was driven to it less by a monetary imperative than by a desire to meet new people and experience the world of the nine-to-five career.

Nisha readily acknowledges that she has been lucky: She hasn’t had to scour the landscape for immediately lucrative jobs, and her family has been eminently practical about her career till date. “I have a friend, a software engineer, who would love to leave her field and be an interior decorator. So when I ask her what’s stopping her, she simply says: ‘My parents would never let me,’" Nisha says. “So then it becomes about satisfying other people, not yourself—and that’s never a good thing."