New Delhi: Factories employing more than 10 people will have to contribute towards health insurance of workers under the Employees’ State Insurance (ESI) scheme or a comparable plan whether they use power or not, if Parliament approves the proposed amendments in the ESI Act. The amendments, cleared by the cabinet on Monday, will benefit thousands of workers in at least 773 industrial clusters. National elections are due by May. 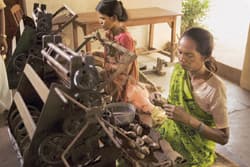 Welfare moves: Workers at a cottage industry in Mirzapur. The Union cabinet has also cleared a proposal that would allow ESIC to bid for Central insurance schemes which target workers in the unorganized sector. Harikrishna Katragadda / Mint

Many of these units “under-report" power usage to avoid providing health cover to employees, said a government official, who declined to be identified. The amendment will thus cover for such subterfuge.

The small industries’ lobby has attacked the government’s move. “This should be optional and not made compulsory. Many workers still do not get medical facilities in hospitals run by ESIC (Employee State Insurance Corp.)," said Sudarshan Sareen, president of All India Confederation of Small Micro Industries Association, which has about 300 members.

ESIC is a federal agency that implements the ESI Act and runs hospitals with some contribution from the states.

The proposed change in the definition of a factory—irrespective of whether it uses electricity or not—is among the 17 amendments cleared by the cabinet to reduce red tape and expand insurance coverage for workers in the organized sector, which represents 6% of India’s total workforce.

A vast majority of India’s unorganized workers don’t have any health cover.

But the cabinet on Monday also approved a proposal to add a new chapter in the ESI Act that will allow ESIC to bid—along with private insurers—for Central insurance schemes such as the Rashtriya Swasthya Bima Yojana (RSBY) which target workers in the unorganized sector.

At present, the ESI Act does not permit ESIC to provide benefits to non-insured persons. RSBY is a Central scheme launched last year to benefit unorganized workers who live in poverty.

The government has also suggested amending section 91A of the ESI Act, that will disallow state governments to exempt contribution by factories retrospectively. ESIC officials will also not be able to ask factories about contribution details that go back more than five years. The time limit for assessing past contribution has been suggested to curtail harassment by officers.

The cabinet also gave its approval to allow third-party participation in running ESIC’s hospitals and raise age limit of dependent beneficiaries for entitlement—a family member of an insured worker—from 19 to 21 years, a long-standing demand of trade unions.

The amendments also allow ESIC to open medical colleges to meet shortage of doctors at its hospitals. Many of the hospitals and dispensaries run by ESIC are in a state of disrepair. These hospitals are built by ESIC in areas where insured persons live in industrial clusters.

While many of these measures are expected to boost coverage and improve medical facilities, the activities of ESIC, which has a corpus of Rs17,000 crore, has been questioned by Parliament’s public accounts committee for its failure to improve service.

Contributions by both the employer and employee are deposited into the ESI Fund, which is used to provide medical aid and meet expenses of its vast administrative network that runs into more than 144 hospitals and 50 regional offices. It also said there was no significant improvement in either service or cash benefits to beneficiaries.