New Delhi: Moves by the government and the opposition to not allow their political differences to come in the way of the business of legislation are reaping rewards—lawmakers are spending more time discussing urgent issues and bills have been sailing through Parliament.

With only five more working days to go before its end, the second half of the budget session has seen the Lok Sabha and opposition-dominated Rajya Sabha working to pass bills despite disruptions and heated debates.

Productivity level was 120% in the Lok Sabha and 90% in the Rajya Sabha, according to New Delhi-based PRS Legislative Research.

Productivity in the Rajya Sabha is seen as surprisingly high, given that the ruling Bharatiya Janata Party (BJP) and the main opposition party Congress had at the beginning of the second half of the budget session decided to corner each other over a series of issues, including the Uttarakhand political crisis, Panama Papers trailing black money and alleged corruption in the AgustaWestland helicopter deal.

The research group measures productivity by the number of hours spent in productive time—without disruptions—out of the scheduled working hours that the two houses are allotted.

Productivity reaches beyond 100% when lawmakers meet for more than the allotted time. 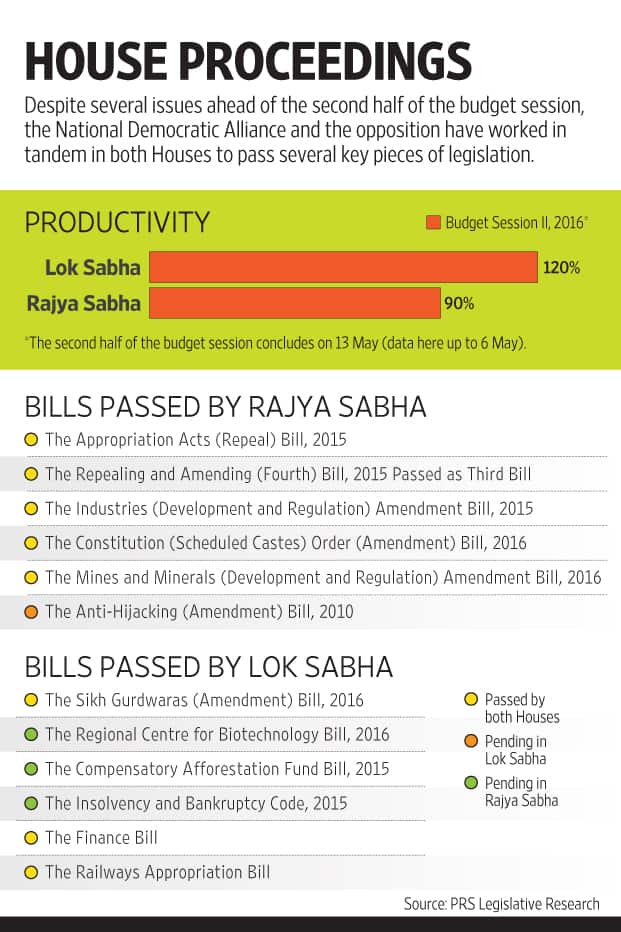 Ministers claim that the turnaround happened after senior leaders of the BJP-led National Democratic Alliance (NDA) approached Congress leaders and suggested the two sides hold discussions on the Parliament deadlock.

This followed a meeting called by parliamentary affairs minister M. Venkaiah Naidu on 27 April, which is thought to have led to a breakthrough between the opposition and government.

“During the first two weeks of the current budget session, the Lok Sabha has passed six bills including the Insolvency and Bankruptcy Code, 2015, the Railways Appropriation and Finance Bills. The lower house also discussed the demands for grants of six ministries, development of north-eastern region, skill development and entrepreneurship, housing and urban poverty alleviation, social justice and empowerment, civil aviation and tourism," said a senior minister.

“The Rajya Sabha has so far passed seven bills including the Industries (Development and Regulation) Amendment Bill, 2015, and discussed the working of the ministries of health and family welfare and human resource development. The drought situation was also discussed," the minister added.

Last week, the two houses also held a discussion on the alleged irregularities in the AgustaWestland helicopter deal with both sides levelling allegations against each other.

The government plans to present and discuss the Uttarakhand budget for 2016-17 and passing of the Uttarakhand Appropriation (Vote on Account) Bill, 2016, to replace an ordinance. The decision could lead to fresh political trouble between the opposition and NDA members because former Uttarakhand chief minister Harish Rawat is scheduled to prove his majority on the floor of the house on Tuesday.

“We are a responsible opposition party. We have always maintained that we are not against legislative business. As and when bills have come for the consideration of the house and if we have no objection to be raised, we have supported them. We wanted to raise some contentious issues in this session which we are already doing. That does not mean that it has to hamper the functioning of Parliament,’’ a senior Congress leader from the Rajya Sabha said requesting anonymity.

The Congress held a protest march against the Union government on Friday to raise the issue of the centre allegedly toppling elected governments in Uttarakhand and Arunachal Pradesh.

Political analysts say that the breakthrough in the second half of the budget session happened because of the “tactical steps" taken by the government to ensure a smooth session.

“There has been some tactical floor management on the part of the government. They have reached out to the opposition parties and ensured that work happens in the session. Parties like the Trinamool Congress and All India Anna Dravida Munnetra Kazhagam are interested in having a collaborative relationship with the centre, especially with elections going on in their states,’’ said Jai Mrug, a Mumbai-based political analyst.

The TMC and AIADMK are incumbents in the states of West Bengal and Tamil Nadu. While polling in West Bengal is over, Tamil Nadu will go to the polls on 16 May and the results will be announced on 19 May.

“Also, one has to keep in mind that for bills like the MMRDA, there is a lot of pressure from corporates and industries on all political parties and they await legislative clarity on such issues,’’ Mrug added.

Last week, the Rajya Sabha passed the Mines and Minerals (Development and Regulation) (Amendment) Bill, 2016, or MMRDA, which aims to make it easier for mergers and acquisitions of steel and cement companies reeling in the aftermath of the collapse of global commodity prices.