Yeddyurappa&#8217;s candidate to be next Karnataka chief minister

Yeddyurappa’s candidate to be next Karnataka chief minister

Bangalore/New Delhi :D.V. Sadananda Gowda was elected by Bharatiya Janata Party (BJP) legislators in Karnataka to take over as chief minister of the state, replacing B.S. Yeddyurappa, who was forced to resign after being indicted in an illegal mining scam by the state anti-graft watchdog.

The BJP legislators voted 65 to 53 on Wednesday to select the candidate supported by Yeddyurappa to be chief minister for the remaining 22 months of the BJP’s first-ever government in south India. 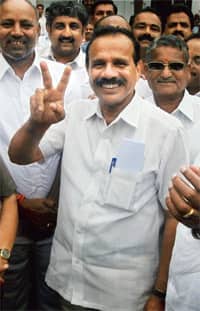 At the helm : Sadananda Gowda will be sworn in on Thursday.

Flanked by law and urban development minister Suresh Kumar and state party chief K.S. Eshwarappa, Gowda pledged to provide a “pro-development, pro-infrastructure, people-friendly" government that will continue the welfare programmes of the outgoing chief minister. He thanked all the MLAs and the party’s senior leaders, in particular Rajnath Singh and Venkaiah Naidu, who he said had been under “much strain" in the last few days.

Out of 122 BJP members in the 224-member state assembly, 118 voted. Those who did not participate were the speaker, a nominated member, an associate member and one who was ill, Kumar said.

He didn’t attach significance to the 53 votes against Gowda.

“When you do not have consensus, and you do a ballot, you will get people voicing different opinions but now that is behind us. Everyone, including Jagadish Shettar, has accepted the verdict, and that sends out a good message. It is now a fresh innings," he said.

Yeddyurappa submitted his resignation to governor H.R. Bhardwaj on Sunday after BJP asked him to step down in the wake of his indictment.

Gowda, 58, is a two-time member of the legislative assembly and two-time member of Parliament from Udupi Chikmagalur constituency, and belongs to the Vokkaliga community. He was state BJP president between 2007 and 2010. He also served as deputy opposition leader in the assembly.

A BJP spokesperson said that Gowda will be sworn in on Thursday.

Initially scheduled for last Friday, the BJP legislature party meeting to elect a successor had to be cancelled after Yeddyurappa’s supporters rebelled, backing him against the appointment of a rival candidate. Leader of the opposition in the Rajya Sabha, Arun Jaitley and Rajnath Singh were deputed to oversee the election of the new Karnataka chief minister, but were unable to break the deadlock, forcing a deferment of the election. The election highlighted differences in the BJP’s Karnataka unit, with the central leadership unable to evolve a consensus on the new chief minister.

On 27 July, Karnataka’s then Lokayukta (ombudsman) Santosh Hegde submitted his report on an illegal mining scandal, in which he estimated the loss to the exchequer at ₹ 16,085 crore between 2006 and 2010. The report recommended action against Yeddyurappa.

Yeddyurappa, who belongs to the politically significant Lingayat community, led the BJP’s first government in a southern state for three years and two months.