RBI’s six-member monetary policy committee (MPC) kept the repurchase or repo rate—the rate at which the central bank infuses liquidity in the banking system by lending to banks—unchanged at 6%. It maintained its neutral policy stance, suggesting that rate cuts in the short term could not be taken for granted. 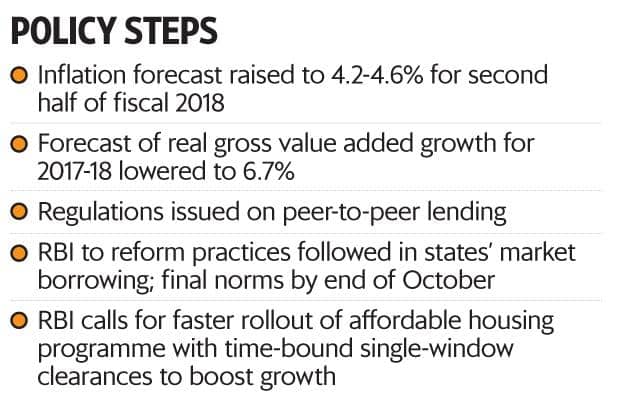 The decision to hold rates was not unanimous. Ravindra Dholakia, one of the three external members of the MPC, suggested lowering the repo rate by at least 25 basis points (bps). One basis point is one-hundredth of a percentage point.

But the rate-setting committee listed several upside risks to inflation such as farm loan waivers, states’ implementation of pay commission allowances and price revisions following implementation of the goods and services tax (GST). It raised its inflation target to 4.2-4.6% for the second half of this fiscal year from 4-4.5%.

RBI governor Urjit Patel said rate action will depend on coming data and on the inflation trajectory over the next six to seven months.

“The tone of the policy was neutral with adequate highlight on upside inflation risks. We maintain our expectation that MPC will remain on hold as it continues to watch out for evolving growth-inflation dynamics," said Madhavi Arora, economist at Kotak Mahindra Bank Ltd.

Since the last policy meeting in August, when RBI cut the repo rate by 25 bps), consumer price index-based (CPI-based) inflation accelerated by nearly 2 percentage points to 3.36% in that same month, data released in September showed. The central bank has a medium-term target of 4% for CPI inflation

“The possibility of fiscal slippages may add to this momentum in the future," the committee said. Fiscal slippages refer to the government likely overshooting its deficit targets.

The cental bank’s warning comes at a time when there are calls for a fiscal stimulus to boost growth. Economic growth decelerated to 5.7% in the quarter ended June, the slowest pace in three years, as it felt the lingering impact of the November invalidation of high-value banknotes. Production cuts and destocking ahead of the 1 July implementation of GST also contributed to the slowdown.

The central bank lowered its fiscal 2018 projection for growth in gross value added (GVA), a measure of economic output, to 6.7% from 7.3%, citing adverse shocks, especially to the manufacturing sector, from the implementation of GST.

“This may further delay the revival of investment activity, which is already hampered by stressed balance sheets of banks and corporates," said the MPC statement.

Soumya Kanti Ghosh, group chief economic adviser at State Bank of India, said that if second-quarter GDP growth declines and inflation does not quicken sharply, there will be room for rate cuts towards the end of the fiscal year.

RBI’s revised growth projections envisage an acceleration in GVA growth to 7.1% and 7.7% in the December and March quarters respectively. RBI governor Patel also pointed to a “possibility that the cyclical upturn will happen in the next two quarters".

The MPC also said recapitalizing public sector banks adequately will ensure that credit flows to productive sectors are not impeded and growth impulses are not restrained.

Separately, RBI reduced the statutory liquidity ratio (SLR) by 50 bps to 19.50%, effective from 4 October. SLR is the minimum proportion of deposits that banks have to invest in government securities.

This move is a part of a transition to the so-called liquidity coverage ratio (LCR), which is part of the Basel III capital framework, of 100% by January 2019. LCR is the proportion of liquid assets required to be held by financial institutions.

On Wednesday, bond yields closed higher as the market saw a lower possibility of rate cut in the near term. The yield on the benchmark 10-year government bond rose by 5 bps to close at 6.703%. Share indices also ended higher, with the Sensex gaining 0.55% to close at 31,671.71. The rupee rose 0.8%, its biggest gain in seven months, on heavy dollar sales following the policy announcement. It closed at 65.01 against the dollar.