Darjeeling: Fire ravaged the Oberoi Everest hotel in Darjeeling and reduced the imposing Victorian mansion to a derelict.

That was way back in 1984, and the hotel has since been a silent witness to the gradual decline of the town once celebrated as the Queen of Hill Stations. 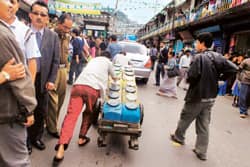 Scarce asset: Residents carrying water on a hand-pulled cart in Darjeeling. A private water tanker of 4,000 litres costs around Rs650 in the town. (Photo: Indranil Bhoumik/Mint)

“Water shortage did us in," says P.R.S. Oberoi, chairman of EIH, which runs the Oberoi hotel chain. “We have spoken to the local authorities several times since, but no one would guarantee water supply to the hotel," Oberoi adds.

From top-of-the-line hotels to ordinary households, the water shortage is hurting everyone in the tea-growing hill region, home to more than 100,000 locals, where ethnic Gurkhas are campaigning for a separate state of their own.

Darjeeling requires about 1.7 million gallons of water every day, but gets less than half that from the municipality, proof of how much its civic infrastructure has declined.

“During the tourist season, we are compelled to buy water from private tankers, which cost Rs650 for 4,000 litres," said Pathik Saha, manager of Sinclairs Darjeeling, one of the region’s leading hotels. During March-June and September-October, the peak tourist seasons, the hotel requires up to six such tankers a day.

“I pay Rs25 for 10 litres, and even then, I’m not sure if the water is safe (for consumption)," said Maya Tamang, a mother of three in the Chandmari area of the town.

Tamang said the water she buys from private suppliers comes from the jhoras, or mountain streams, in and around the town.

Clusters of plastic pipes strung up like power cables are a common sight in Darjeeling. These pipes carry water that trickles down from the jhoras.

Shortage of water has added fuel to the Gorkhaland campaign in Darjeeling, where the Gorkha Janmukti Morcha (GJM) on Monday enforced an indefinite shutdown that has halted normal life.

“You can see for yourself what the situation is. The water supply system here has not changed since the British designed it for 10,000 residents," said Raju Pradhan, assistant general secretary of the GJM.

The problem could have been sorted out much earlier had the government been serious about implementing the Balason project—the first major initiative by the state government to end the water shortage in Darjeeling.

Way back in 1995, the government had planned to pump water from the Balason river, 30km away. At that time, the Darjeeling Gorkha Hill Council, or DGHC, headed by the Gorkha National Liberation Front chief Subhash Ghising had executive power for public works and water management in the hills.

“Then (in 1995), it would have cost Rs35 crore but neither the state government nor Mr Ghising showed much interest despite the fact that the Planning Commission had given a grant of Rs10 crore," said former legislator D.K. Pradhan. The shortage of water was used by the DGHC to divert funds by floating water-harvesting schemes, he alleged.

The Balason project is now expected to cost Rs56 crore. The government has set a new deadline for completion of the project—November 2009. “We hope to meet it, but then with all this unrest, one can never say," said Rajesh Pandey, the district magistrate, a post that carries the power of revenue administration.

Meantime, the Oberois remain hopeful of reopening their hotel, though the octogenarian chairman of EIH admits it might not be very soon. “I am a die-hard optimist," Oberoi says.