PA Sangma | A Chair too far?

PA Sangma | A Chair too far?

New Delhi: When P.A. Sangma was demitting office as labour minister in 1995, his office staff wanted to give him a going-away present. Asked what he wanted, Sangma replied he would like to take away his office chair.

The staff duly completed the formalities and presented Sangma the cane and wooden chair—a gift he has preserved until now. 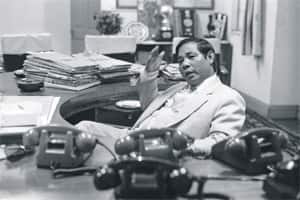 Sangma as chief minister of Meghalaya in 1988 .(India Today images)

Like the Congress’ Pranab Mukherjee, the United Progressive Alliance’s (UPA’s) candidate in Thursday’s presidential election, Purno Agitok Sangma rapidly climbed up the power ladder after he entered national politics in his 30s.

Born in the village of Chapathi in West Garo Hills, Meghalaya, a fortnight after India won independence, Sangma was politically savvy enough to grab the opportunities that came his way in the Congress party, which was eager to project him as a symbol of its pan-India presence.

Re-elected to Parliament in 1991, he served as minister for coal, labour, and information and broadcasting before becoming speaker in 1996. Interestingly, Sangma was unanimously elected speaker at a time when his party, the Congress, was in the opposition. He was expelled from the party in 1999 for raising the issue of Congress president Sonia Gandhi’s foreign origins, and went on to found the Nationalist Congress Party (NCP) with Sharad Pawar and Tariq Anwar, who were expelled from the Congress for the same reason. 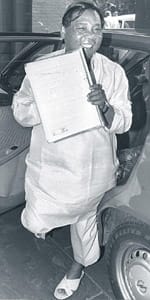 With his daughter Agatha Sangma, a Lok Sabha member and minister of state in the Congress-led coalition government, and a few close aides lending him support, Sangma began his campaign from Bhubaneswar, where he secured the support of Orissa CM Naveen Patnaik’s Biju Janata Dal. The main opposition Bharatiya Janata Party (BJP), which was clueless about its strategy in the presidential election, had no option but to back Sangma after it failed to persuade former president A.P.J. Abdul Kalam to join the race.

In his pursuit of the president’s office, Sangma hasn’t hesitated to play the tribal and Christian cards. At his meeting with Patnaik, he presented his credentials as a tribal with aspirations to become India’s first citizen, aiming to strike a chord with Patnaik’s main support base of tribals. 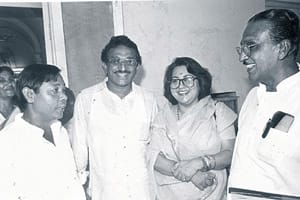 Though he has always held positions of power and been popular in his constituency Tura—from where he won the first of his eight Lok Sabha terms in 1977—the one possible black mark against Sangma is that he abandoned leaders who trusted him and held him in high esteem.

Many Congress politicians still can’t forgive Sangma for what they see as his betrayal of Sonia Gandhi. “She had full trust in his ability to lead the Congress in the north-eastern region. She was deeply hurt by what he had done," said a Congress general secretary, who did not want to be named. Spinning a wheel at the Sabarmati Ashram in Ahmedabad, Gujarat, on 6 July.(Ajit Solanki/AP)

“It shows Sangma’s dual political stand. He lets his daughter campaign against the UPA candidate while she continues to be a minister," Gyanendra said.

Another NCP leader, who has worked closely with Sangma for almost a decade, said he would be a better president than Mukherjee because he knows “the pulse of the people and he is thorough with the legislative process and the Constitution". The leader declined to be named.

The BJP, which surprised everyone by throwing its weight behind the former Congress leader, has several reasons for supporting him.

“Sangma has got everything that makes a president virtuous and deserving enough to get our support. He is from the North-East and belongs to a minority community. He has...done a lot for the poor in his own state Meghalaya. Sangma has vast political experience and his acceptance is beyond the boundary of ideology," BJP spokesperson Tarun Vijay said.

“We may admire the personal quality of Mukherjee, but it is our democratic dharma to support those fighting corruption and air their disapproval of UPA alliance of corrupt governance. Hence, Sangma stand(s) out as the tallest leader in the presidential election," Vijay said.

His cherubic face, hearty laugh, quick wit, boundless enthusiasm and a spotless political career have won him many friends and admirers. A chain smoker until a few months ago, Sangma also loves his food and drink.?The family home is open to all.

“I think people love his simplicity, his nature as an approachable person," said James Sangma, one of his two sons. Although his father has been a disciplinarian, life at home is fun when he is around, James said. “I have always been impressed by his integrity, principles and sincerity," added James, a legislator in the Meghalaya assembly.

The numbers in the electoral college do not favour Sangma; Mukherjee has already been assured of more than 60% of the votes.

Sangma is pinning his hopes on the support of his fellow tribal members of Parliament, state lawmakers, “conscience votes" and even miracles. “Yes, miracles can and do happen in this world," Sangma said, when a suggestion was made that only divine intervention could help him win.

Elizabeth Roche and Sahil Makkar contributed to this story.

Also Read | Pranab Mukherjee | The No. 2 who came in from the cold