Mumbai: The new monetary policy committee (MPC) of the Reserve Bank of India (RBI) voted unanimously to cut the key interest rate by a quarter of a percentage point in its first policy review on Tuesday, citing slowing inflation.

The six-member panel, headed by new governor Urjit Patel, believes that food inflation momentum has moderated and opened up space for policy action, RBI said in a statement after lowering the repurchase rate, at which it infuses liquidity into the banking system, to 6.25%.

Economists saw an implicit easing of the consumer price inflation target of 4% by March 2018 as the central bank shifts its sights to propping up growth. Simply put, it could mean more rate cuts, and as early as the December policy, especially if inflation dips below 5% by then.

“The MPC review marks a perceptible shift in the RBI’s policy stance. Firstly, the policy statement was silent on the future policy outlook, while clearly outlining the outlook for growth-inflation dynamics. A clear timeline to get to the 4% inflation target was not spelt out," said Aditi Nayar, senior economist with rating agency Icra Ltd. “A lot of emphasis was placed on global growth being subdued, and its impact on dampening domestic growth impulses." 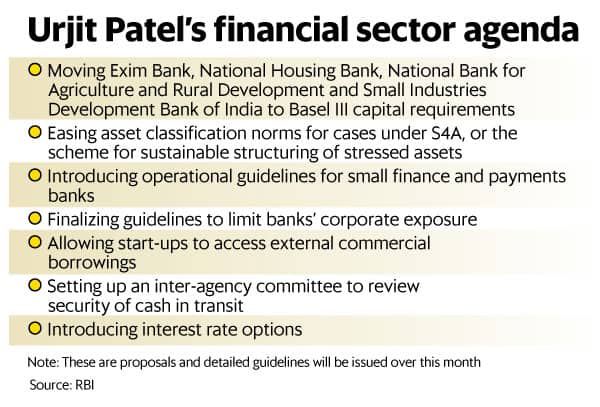 The MPC sees retail inflation centering around 5% by March 2017 with upside risks to the forecast. It said these risks were lower than those seen at the previous two policy reviews in June and August when RBI, under Patel’s predecessor Raghuram Rajan, left rates steady.

Retail inflation fell to 5.05% in August from 6.07% in July, driven by a drop in vegetable prices. Higher sowing of crops and supply management measures have helped curb rising food prices.

“It was a call between (cutting rates in) October and December. Transmission takes time. If you are convinced that there needs to be a cut, better to do it sooner," said Gaurav Kapur, an independent economist.

The salient feature is that the “glide path of 5% by March 2017 and 4% by March 2018 seems to be no more the guiding factor. There appears to be a relaxation given that the target is now a range", said Kapur.

Governor Patel indicated that the accommodative stance was also driven by the new monetary policy framework, under which the RBI has to target 4% medium-term inflation with an upper and lower tolerance band of two percentage points.

“Four plus or minus two is what we have to endeavor for. Our March 2015 statement also makes that very clear. What we have identified are some upside risks but there are downside risks also," said Patel.

Still, the central bank now looking at a neutral real rate— the rate at which economic growth is close to potential and inflation is stable—of close to 1.25%, from 1.5-2% earlier, suggests that there is more space for rate cuts.

“The RBI’s stance on inflation and growth expectations appears to be more dovish than initially envisaged," wrote Abheek Barua, economist at HDFC Bank Ltd, in a note to clients. The MPC’s willingness to look through the initial impact of house rent allowance award of the Pay Commission means that “the RBI in the future could ignore one-off cost pushes or supply shocks unless there is a significant risk of the shock getting generalized and percolating through the system".