Jim Clifton | Only 8% Indians are positive about their jobs

Jim Clifton | Only 8% Indians are positive about their jobs

New Delhi: Jim Clifton, chairman and chief executive officer of US research and consulting services company Gallup Inc., says he does not understand art, golf or sailing. He only understands polls as he grew up in Nebraska interviewing farmers and ranchers for his client Cargill. Clifton acquired privately owned Gallup in 1988 and merged it with his own poll company that he started at 18. Today, Gallup is known for its presidential poll surveys and the Global Well-Being Index. Underscoring the growing importance of India in the world economy, Clifton launched Gallup’s latest WellBeing report at the Behavioral Economics Summit in New Delhi on Monday. Edited excerpts from an interview:

Why did Gallup release its Global Well-Being report in India? 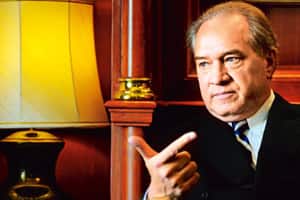 When did you start the overnight poll?

Four years ago. We are really interested in the new science of well-being. There are about a 100 million good jobs in America but only 30 million who come to work are highly engaged and feel good about their jobs. It doesn’t seem like a very good number to me. About 20 million are really miserable employees. But America is good compared with India or China or Russia. These are really lousy workplaces.

India’s engagement number is 8%. It means only 8% people who come to work are engaged, positive and thrilled about their jobs. Thirty per cent are miserable. They are actively disengaged. They come to work and sit with someone who is spirited till his spirit goes away. It’s going to be very hard for India in the next 10 years. The world’s GDP (gross domestic product) right now is $60 trillion. In 30 years, it will be $200 trillion. The question is, who gets that $140 trillion? If India does not get its share, then civilization collapses.

The ILO (International Labour Organization) are good people but they count informal jobs as work. Eight per cent world unemployment is hallucination—it is much more. In America, if I am an engineer at Boeing Co. who is out of work, and I come and mow your lawn for $20 an hour, I am not part of the 8.3% unemployed. What they cruelly call me is underemployed. So what Gallup is trying to do is to report new unemployment. We are going to do all that in India.

How do you capture well-being? Is there a science behind this?

In creating the world poll, we went outside to the very best economists and said to them—if you could ask the world anything so leaders could do their jobs better, what would you ask? So we have a group of the most famous behavioural economists in the world (Daniel Kahneman, Ed Diener, Alan Krueger and Angus Deaton) advising us.

How accurate is your well-being survey?

I think its deadly accurate. Maybe 3% up or down. Well-being is a very soft term. In Egypt and Tunisia, we could see (before the revolution) the societies falling apart because “thriving" was crashing. We measure “suffering" and “thriving". When thriving starts to crash, life gets real dangerous.

I don’t want to sound competitive but no other company can do this because they don’t have the money. We spend $20 million a year.

You have written a book on the job wars. Where will the jobs go?

My big conclusion was entrepreneurial spirit, not innovation, is the key to creating jobs. I also think there is a migration pattern right now of the most talented people and where those talented people will land is going to make a lot of difference to jobs in the future.