Mumbai: With 120 million first-time voters, a key theme in this year’s election campaign has been capturing the youth vote. Political parties are stressing the youth of their leaders, never mind that India has a tradition of calling 60-year-olds Young Turks.

Thus, Jairam Ramesh, 60, has suggested a retirement age of 70 for Congress leaders. A 63-year-old Narendra Modi has edged out L.K. Advani, 86, as the prime ministerial nominee of the Bharatiya Janata Party (BJP). After the former’s anointment, Advani said during a book release function in December, “Whether one is old or young is not determined by one’s age."

Advani’s statement may well have a kernel of truth in it, a Mint analysis shows. While he had an attendance percentage of 96% in the 15th Lok Sabha, his peer group didn’t do too badly either, with an average 78% attendance. That is better than the average attendance record of MPs below age 55. While attendance is the only factor completely under the control of an MP, it is not the only criterion for judging performance.

For calculating the overall performance of a MP, Mint has constructed an index that provides equal weights to three parameters—attendance, questions asked and participation in debates, based on data from PRS Legislative Research. The composite performance index takes a value between 0 and 1, with values closer to 1 indicating superior overall performance (see chart for detailed methodology).

There are five key trends that emerge from an analysis of the attendance rates and the composite performance score of MPs. 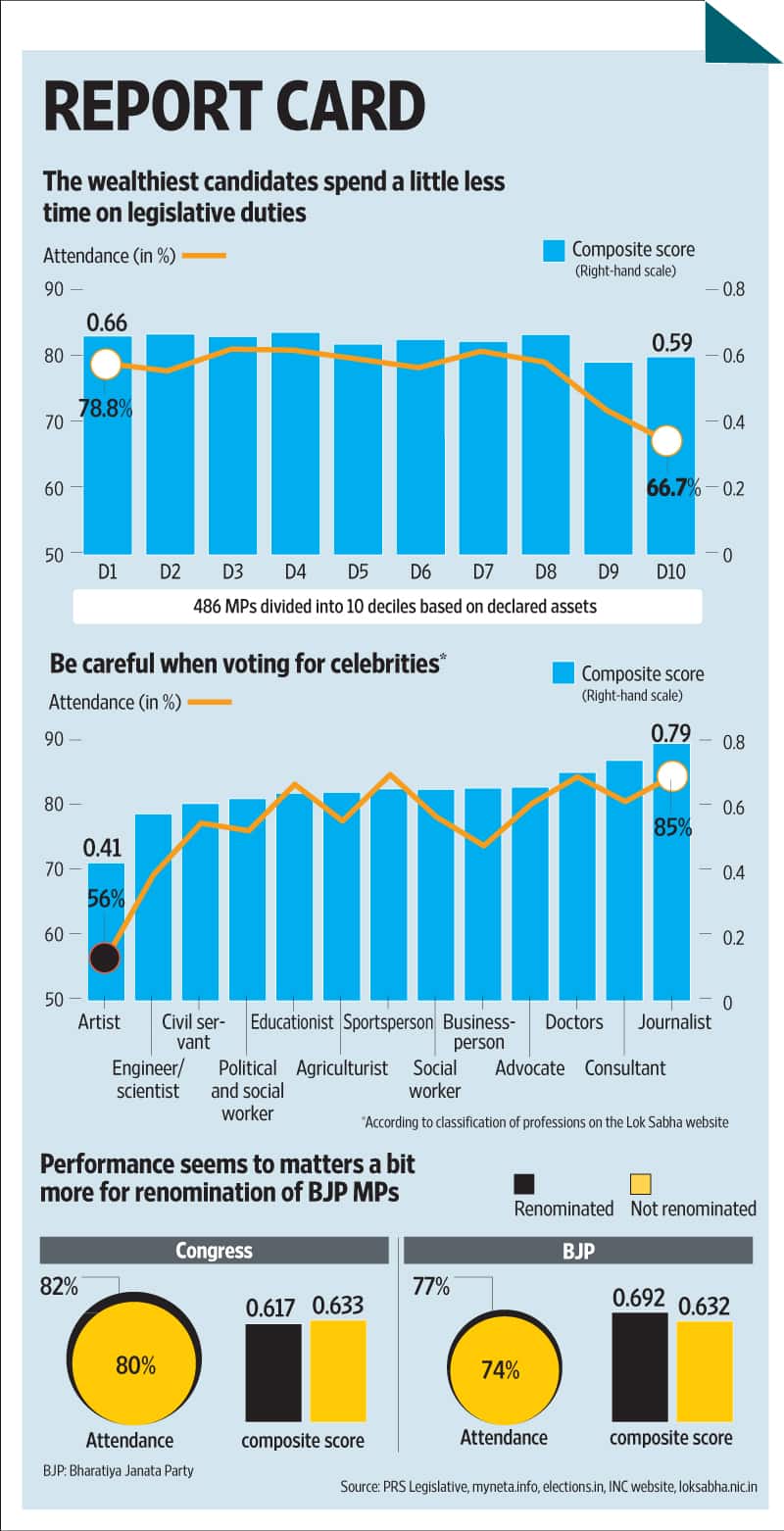 Second, richer MPs on an average spend a little less time on legislative duties than others. For the purpose of this analysis, MPs were divided into 10 deciles based on assets declared at the time of their election. The richest two groupings have a marked decrease in attendance as well as overall performance. People such as Navjot Singh Sidhu and M.K. Alagiri, the estranged son of Dravida Munnetra Kazhagam supremo M. Karunanidhi, have dragged down the ratings for this group.

Third, artists (musicians, actors and writers) have the poorest record in Parliament. Thus, while Bappi Lahiri (BJP, contesting from Serampore) and Moon Moon Sen (Trinamool Congress, Bankura) may add bling and glamour to the election campaign, the past performance of their peers hardly shines. Journalists (and we are quick to deny any allegations of bias here) have the best performance, though the sample size is only three.

Fourth, the average BJP MP’s index score is 0.674 compared with 0.623 for Congress. However, the scores for the latter could have been depressed because it was the ruling party, so questions would have been fewer, and debate participation dominated by ministers. This analysis excludes outliers—ministers, the leader of the opposition, and the speaker. It also doesn’t include some MPs whose details PRS hasn’t been able to compile.

Fifth, performance seems to matters a bit more when it comes to re-nominating (giving tickets to) BJP MPs. The difference in the performance of those Congress MPs who have been re-nominated is not significantly different from those who haven’t been. Indeed, the composite score of renominated Congress MPs is slightly lower than their dumped compatriots. 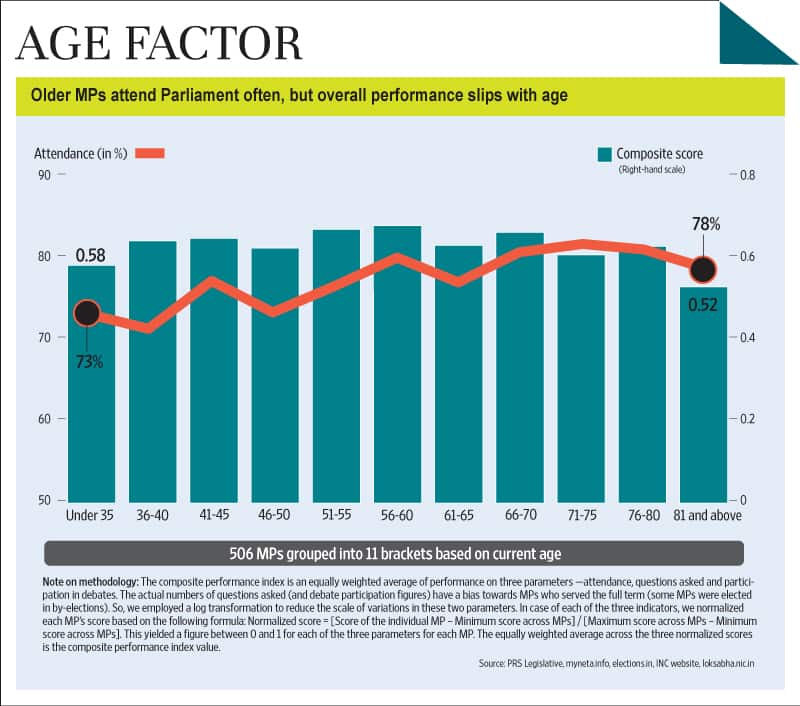 An important caveat about the findings here is the absence of causality. The trends reported here only represent stylized facts about how different groups of MPs perform. For instance, it may not be wise to draw any causal links about an MP’s performance and chances of renomination.

In some cases, MPs have not been renominated because they have handed over their seats to their wives or sons. Others like Vijayashanti have jumped ship to a different party. Renomination after all depends on several political expediencies.