Athens/Paris: German Chancellor Angela Merkel told Greece on Monday to make up its mind fast on accepting the painful terms for a new EU/IMF bailout, but the country’s political leaders responded by delaying their decision for yet another day. Failure to strike a deal to secure the €130 billion ($170 billion) rescue—much of which Germany will fund—risks pushing Athens into a chaotic debt default which could threaten its future in the euro zone.

Speaking in Paris, Merkel expressed the exasperation spreading among the euro zone leaders at seemingly endless wrangling in Athens that has yet to produce a definitive acceptance of the austerity and reform conditions demanded by the lenders. 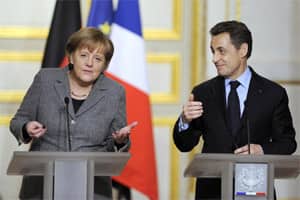 French President Nicolas Sarkozy (R) and German chancellor Angela Merkel give a press conference after a joint Franco-German cabinet session at the Elysee Palace on 6 February 2012 in Paris. AFP

The office of Prime Minister Lucas Papademos, a former central banker who heads a government of politicians, said that a meeting of leaders from the conservative, socialist and far-right parties due on Monday had been postponed to Tuesday.

A statement issued shortly after Merkel spoke gave no reason for the delay. However, it said Papademos would hold further talks with the “troika" of lenders—the European Commission, European Central Bank and IMF—later on Monday.

The party leaders, positioning themselves for a likely general election in April, have baulked at accepting another package of deeply unpopular wage and pension reductions, job cuts and tougher tax enforcement measures. Merkel made clear that her patience was wearing thin on a deal that affects not only Greece but the wider currency bloc, which fears that a default would hit much larger economies such as Spain and Italy.

This sense of urgency seemed to be weaker in Athens. An official at one coalition party said the postponement was due to the fact that the government has not yet supplied the parties with a 15-page summary of the conclusions of a meeting on Sunday of the political leaders.

Greeks have been worn down by a deep recession, now in its fifth year, and wave after wave of austerity measures imposed under the first bailout. Alarmed by the prospect of yet more budget cuts, Greece’s two main trade unions said they would call a 24-hour strike for Tuesday in protest against policies they say have only driven the economy into a downward spiral.

Renee Maltezou, Tatiana Fragou and Harry Papachristou in Athens, Jan Strupczewski and John O’Donnell in Brussels, and Annika Breidthardt in Berlin contributed to this story.