New Delhi: India’s economy is forecast to expand at a faster pace in the full year to March although gross domestic product (GDP) growth slowed in the fiscal third quarter.

Data released by the Central Statistics Office projected a growth of 7.6% in 2015-16 against the government’s more modest expectation of 7-7.5% growth. This despite growth decelerating to 7.3% in the quarter ended December from 7.7% in the previous quarter.

Manufacturing, presumably buoyed by a significant fall in inputs costs following the collapse of global commodity prices, registered a sharp pickup in the third quarter.

The latest GDP numbers will be a crucial input to the Union budget that will be presented on 29 February by finance minister Arun Jaitley.

Nominal GDP is estimated to grow 8.6% in the full year to March. India is now just shy of becoming a $2 trillion economy in 2015-16, with the size of the GDP standing at $1.99 trillion at the current rupee-dollar exchange rate of 67.94. 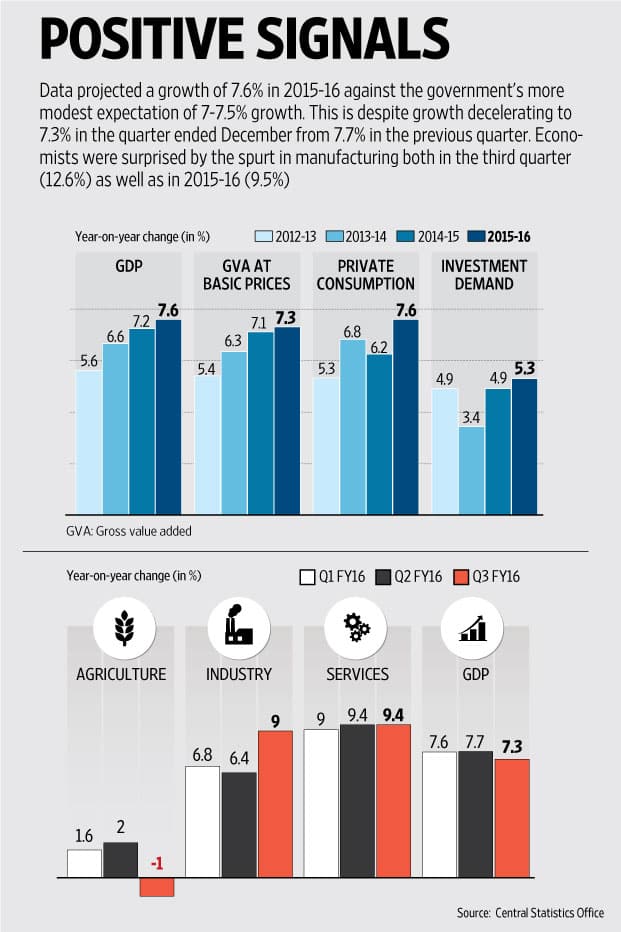 The International Monetary Fund (IMF) last month kept its growth forecast for India unchanged at 7.5% in 2016-17 while it lowered its global growth projection in an update to the World Economic Outlook released in October.

India’s economy is buoyant in the global context, but from a domestic perspective, it may require some support to revive rural demand and rejuvenate public sector banks, said D.K. Joshi, chief economist at rating agency Crisil Ltd.

“Government may not go for a big-boost stimulus and may settle down with a fiscal deficit of 3.5-3.9% which may not significantly take it off the fiscal consolidation roadmap," he said.

The finance ministry is currently debating whether to relax its fiscal deficit target of 3.5% of GDP for 2016-17 and provide a stimulus to kick-start rural demand by stepping up public investment further.

In the mid-year economic review presented in December, chief economic adviser Arvind Subramanian suggested a relaxation, given the sustained weakness in private investment.

But Reserve Bank of India governor Raghuram Rajan warned last month that deviating from the fiscal consolidation road map may lead to potential loss of government credibility and is unlikely to stimulate growth.

Lower nominal GDP, higher spending on account of the implementation of one-rank-one-pension scheme for armed forces and the Seventh Pay Commission recommendations are likely to make it difficult for the government to stick to this target.

Economists were surprised by the spurt in manufacturing both in the third quarter (12.6%) as well as in 2015-16 (9.5%) which is not reflected in the index of industrial production which grew 3.9% during April-November.

The new GDP series based on value-added data released last year has been facing criticism from both policymakers and private economists who complain that it portrays an overtly robust picture of the Indian economy while other macro indicators such as bank credit growth, rural demand and factory output do not support such a depiction.

The CSO said in its statement that performance of the corporate sector during April-December 2015 has also been taken into account while compiling advance estimates.

“Given that GDP data for Q3 is released with a shorter time lag than in other quarters, the quarterly results are available for a curtailed sample of listed entities, which opens up the possibility for subsequent revisions," she added.

Madan Sabnavis, chief economist at Care Ratings, said it will be a challenge for manufacturing to sustain the high growth rate, given that the festive season is over and the rabi (winter) crop is not expected to be too buoyant.

While agriculture contracted 1% in the December quarter, farm production in 2015-16 is expected to grow 1.1% despite a 23% shortfall in monsoon rainfall.

While electricity generation is expected to slow down to 5.9% in 2015-16 from 8% a year ago due to lower demand from state distribution companies, the job-creating construction sector is also set to decelerate to 3.7% in FY16 from 4.4% in the previous year. Among the services sectors which saw an overall deceleration, only financial, real estate and professional services grew in double digits at 10.3%.

Investment demand remained weak, although it is estimated to pick up to grow 5.3% in 2015-16 from 4.9% in the previous year. Private consumption growth was surprisingly projected at 7.6% during the financial year from 6.2% a year ago, mostly supported by urban demand and despite a rural slump.

RBI, in its monetary policy review on 2 February, said the current momentum of growth is reasonable, though below what should be expected over the medium term. “Underlying growth drivers need to be rekindled to place the economy durably on a higher growth trajectory. The revival of private investment, in particular, has a crucial role, especially as the climate for business improves and fiscal policy continues to consolidate."

RBI said the Indian economy is currently being viewed as a beacon of stability because of the steady disinflation, a modest current account deficit and commitment to fiscal rectitude.

“This needs to be maintained so that the foundations of stable and sustainable growth are strengthened. Structural reforms in the forthcoming Union budget that boost growth while controlling spending will create more space for monetary policy to support growth, while also ensuring that inflation remains on the projected path of 5% by the end of 2016-17," it added.