Cricket in the subcontinent is much more than a game, a genteel one at that: It’s a proxy for war, a potent political and diplomatic tool, and the one religion that unites kings and commoners, holy men and brigands of every creed and colour. Far removed from its patrician origins on the estates of British nobility, cricket in the dusty fields and on India’s streets is a metaphor for life as it’s lived in its villages and cities—raucous, colourful, unfettered by rules, and eminently enjoyable.

Few can resist its charms or stay aloof, as Sanjay Austa, a Delhi-based photographer documenting gali cricket, has found over the last five years. “I was what you’d call a ‘cricket philistine’," says Austa. Yet, despite this soccer fan’s disdain, he too, like the rest of the country, became a participant—not as a player or spectator, but as a documentarian.

Austa’s ongoing photo series Gully Cricket: Cricket in Our Backyards, portrays the game as it’s played in the monasteries of Ladakh and on the beaches of Kanyakumari. It did not develop as a cohesive mission; it was, instead, parallel to whatever assignment he happened to be working on at any given point. 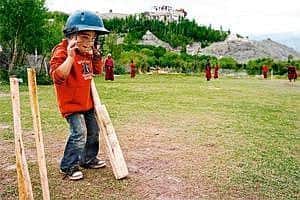 Given the all-pervasive nature of Indian cricket, Austa felt compelled to record the game’s impact on our collective culture. “I was in Ladakh last year and there were some student lamas playing outside the Matho Monastery. It made a striking backdrop. I remember a little boy who was a (Sachin) Tendulkar fan. He was quite the rebel and refused to put on the lama’s maroon robes," he says.

Besides Ladakh, Austa has photographed boys swinging branches for bats in a remote Himachal Pradesh hamlet. “Bats are hard to come by in the remote tribal regions of Himachal. But the boys will not let that come in the way of their enjoying the game," he explains.

In Chennai, a fisherman’s child forgot to brush his teeth, so caught up was he in the excitement of the game. “Even in the North-East, which is traditionally a football and Olympic sports-playing region, I would come across at least one group playing cricket in every city," he adds.

As Austa’s series proves, there can be no real philistine when it comes to cricket in India.

Sanjay Austa is a New Delhi-based independent documentary photographer. These pictures are part of his ongoing series Gully Cricket: Cricket in Our Backyards.