At 7.4%, inflation for the week ending 29 March, India is till way behind Vietnam (15.7% in February) and China (8.7% in February) in the list of Asian countries that topped the inflation figures for the first quarter of the current calendar year. 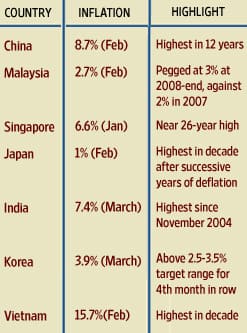 In Singapore, the level of inflation is the highest the country has seen in over two-and-a-half decades, while Vietnam, another fast growing Asian economy is bending under a spiraling inflation rate twice that of China, whose inflation rate in February was the highest in over a decade.

Chinese Prime Minister and chief economic official, Wen Jiabao, has declared reducing inflation as his Government’s top priority and has promised to increase supply of basic food items like meat, oil, grain, vegetables and other such goods.

Failure to do so may spark a possible political backlash and civil unrest, and embarrass the Government in a year when Olympics are to be held, warn reports in the Chinese media.

In Japan, prices rose 1% in February on the back of rising oil and commodity prices. While the number is miniscule, it comes after almost a decade of deflation. Japan had been looking forward to growth-led inflation, cost-push inflation resulting from spiralling energy and raw material prices.

Now, with a slowing economy, the Japanese central bank worried. According to media reports, the Bank of Japan may have to reverse its policy and cut interest rates in order to avert recession.

At home, RBI governor YV Reddy said on Tuesday that inflation in India was more intense than expected. The RBI has already hiked interest rates to drain liquidity from the system and has banned the export of several food commodities.

Inflation worries have also caused currencies and stock markets to fall in India and in countries like Indonesia and Philippines. Going forward, most Asian currencies are expected to rise as Governments let currencies appreciate to lessen food and oil import bills.