Bangalore: The shanty town of Dharavi, at the heart of the financial hub of Mumbai, will soon have more stringent building rules, as it inches towards a makeover.

The Dharavi Development Authority, or DDA, has introduced new measures that would reduce population density in this 535 acres of matchbox-size houses and narrow lanes—often classified as one of the world’s most thickly populated slums—once its redevelopment is complete. It is currently home to more than 57,000 families.

Dharavi has nearly 17,000 people to an acre, said Mukesh Mehta, architect of its redevelopment plan, adding that this density is comparable only with Kibera, Nairobi’s second largest slum, and Mexican shantytowns.

As part of Dharavi’s Rs13,000 crore redevelopment, no group of developers will be allowed to build residences and can only develop commercial space such as offices and malls. The only residences allowed will be the ones for relocated residents.

“Residential buildings would further clutter the area adding to the existing population, while commercial buildings will ensure a mobile population that will come into Dharavi only for work or recreation," said Gautam Chatterjee, chief executive officer of DDA. 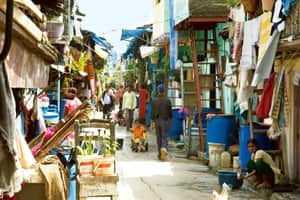 Going commercial: Mumbai’s Dharavi, one of the most thickly populated neighbourhoods in the world, has a population density of 17,000 per acre. Spread over 535 acres, the slum is home to about 57,000 families. Madhu Kapparath / Mint

Chatterjee, who has recently taken charge of the project, admitted that the decision was taken after various citizen action groups in the city reacted strongly against the imminent increase in population density in Dharavi as a result of the makeover.

In Dharavi, which is close to the business district of Bandra-Kurla Complex, or BKC, only commercial development could backfire, he said. “There is enough supply of commercial office space in and around BKC, and releasing a huge stock of more such space could lead to an imbalance," Kumar said.

DDA has recently decided to provide larger homes to rehabilitated residents. Each family will now get 300 sq. ft homes instead of the earlier 269 sq. ft. The 1,640 families which currently live in homes larger than 300 sq. ft will get 400 sq. ft living units. However, they have to pay the construction cost for the extra 100 sq. ft.

There were mixed reactions from developers, who have formed teams to bid for this project, to the changes in rules.

“I think it would be a viable option for us," said Sarang Wadhawan, managing director of Housing Development and Infrastructure Ltd, which had got Lehman Brothers Holdings Inc. as a financial partner for the project. “Any development in Mumbai, whether commercial or residential, due to space and supply constraints, gets a premium."

Hemant Shah, chairman of Akruti City Ltd, that has jointly bid with DLF Ltd, said that in a slum scheme, it doesn’t matter whether it is residential or commercial development. “Eventually, it is the selling rate that would determine the viability of the project," Shah said.