New Delhi: Ahead of the Uttar Pradesh assembly elections, the Bharatiya Janata Party (BJP) faced a dilemma while discussing its manifesto. A section of the party believed the manifesto should promise to write off loans of farmers, suffering from the fallout of rural distress brought upon them by a combination of successive failure of monsoon rains and collapse of global commodity prices. But Prime Minister Narendra Modi was opposed to this—it ran contrary to his avowed ideological commitment to empowerment over entitlement.

Eventually, the PM did relent, but only after considerable persuasion, including from members of his trusted A-team, and the party made the commitment in its manifesto; it probably contributed in good measure to the record-breaking performance of the BJP in the UP election.

This anecdote captures the constantly evolving nature of Brand Modi, driven by the desire to adapt to new circumstances. Not only does this flexibility constantly add freshness to the Prime Minister’s appeal, it also, going by the recent electoral outcome, consistently scores over that of his rivals who have largely remained mired in appealing to traditional voter metrics of social identity defined by caste and religion. In short, Modi is constantly setting the agenda and the opposition is, at best, playing catch-up; that’s never a good idea, especially when appealing for votes.

In 2014, Modi’s brand rode growing public disaffection against the two-term anti-incumbency of the Congress-led United Progressive Alliance (UPA) and the promise of “acche din" (good days) for all including Indian business. Two-and-a-half years later, the appeal of Modi has evolved to that of the incumbent. It builds on the track record of his government and offers a broader canvas to tap rising aspirations of a new social coalition. This is a grouping beyond the traditional confines of the BJP, defined around upper castes. It is an audience that has lapped up the newest aspect of Modi’s personality after the audacious note-ban experiment—the anti-corruption crusader who will take no prisoners.

Brand experts such as Sandeep Goyal, chairman of Mogae Media, a Mumbai-based marketing and communication agency, who has tracked the Modi brand over the past five years, concurs on the evolving brand of the prime minister. “Modi has featured in my research over three waves of data—collected in 2012, 2015 and 2017. The most dramatic rise in scores is on one single attribute: trustworthiness. And this is the single attribute driving his success since his innings as PM started."

Popular references, especially among some analysts, is that the Modi regime has succumbed to the pressure of electoral politics and morphed into a pro-poor political party.

They cite the raft of recent policies: cooking gas for the poor, housing for all and an electricity connection for every household.

But, like his political rivals, these analysts are misreading Modi’s politics of brand management.

Whether it is banking the unbanked, insuring the uninsured, cooking-smoke free lives for the poor, toilets for all under the Swachh Bharat mission or loans for the cottage industry entrepreneur, they all have one common theme: empowerment. 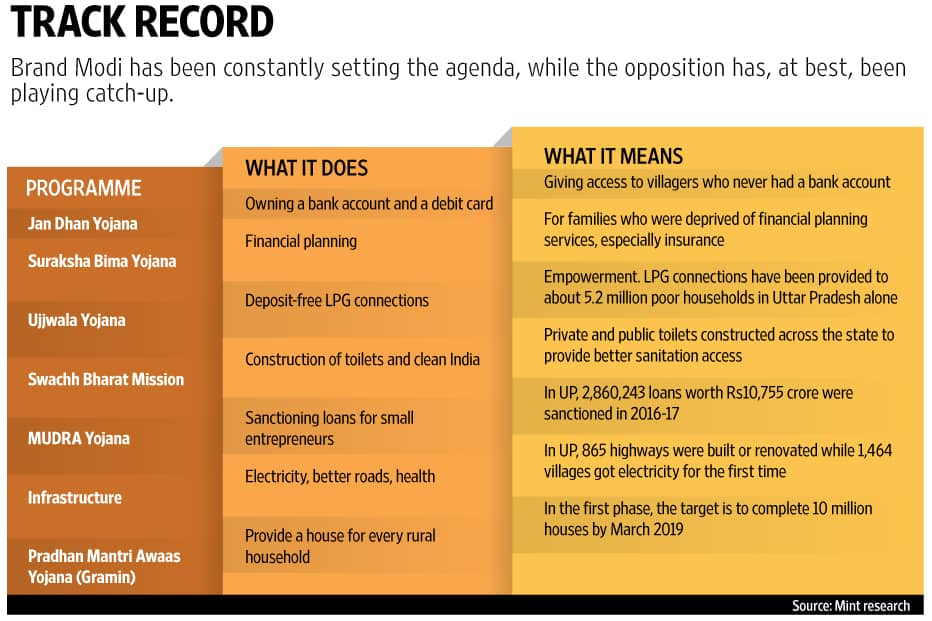 The transition from a smoking choolah (an indigenous oven fuelled by coal and wood) to cooking gas can be incredibly empowering, as women in 5.2 million households living below the poverty line who have benefited from the subsidized cooking gas scheme are discovering.

It is, as the old adage goes, people preferring learning how to fish than just be promised a supply of free fish. Modi’s strategy is to create an ecosystem which will provide a level playing field and ensure aspirations are met within the contours of a rules-based regime—as opposed to the exceptions-based regime that India has largely adhered to in the past 70 years.

If this was not enough to underline his commitment to the poor, the demonetisation of high value currencies announced on 8 November helped Modi seize the mantle of the anti-corruption crusader.

By positioning the move largely as one targeting the rich who have amassed wealth through illegal means, he has only reinforced his appeal to the economically disenfranchised.

The opposition, as blindsided by the move as many experts, sought to dwell on the short-run dislocation to discredit Modi; some such as the Communist Party of India (Marxist) general secretary, Sitaram Yechury, even coined a pejorative phrase: “jumla (yarn) economics".

Modi was unfazed and even held out a lesson for his political critics.

“Analysts (and critics) have failed to recalibrate (after I assumed power) the metrics they used to assess previous governments and old-generation politicians. This is exactly why they have failed to grasp the import of what happened on 8 November," he said in his first public speech in the week after demonetisation.

In hindsight, Modi is right. The opposition, which sought to turn the Uttar Pradesh election into a referendum on demonetisation, can find no solace in the humiliating verdict—which gave the BJP a three-fourths plus mandate.

“Regardless of the intellectual and largely inconclusive discourse around it, demonetisation turned out to be the emotional silver-bullet for the masses, establishing Modi’s image as a decisive reformer and a champion against corruption," says Samit Sinha, founder and managing partner, Alchemist Brand Consulting.

Voting patterns in UP, especially among non-Jatav Dalits and non-Yadav other backward classes (OBCs), suggest that Modi has been able to expand BJP’s appeal to extend beyond its conventional voter base.

And the fact that he has achieved this twice, first in the 16th general election in 2014 and now in the UP election, suggests that Brand Modi has been able to break through the barrier of social identity of caste. Doing so in Uttar Pradesh is no small feat.

Addressing party workers at the BJP’s headquarters in the capital on 12 March, the day after the historic verdict, Modi said the electorate has voted for a “New India". In this new era, he said, governments will be formed by majority, but governance will be on consensus and a key stakeholder will be the poor.

Implicitly, he may also be suggesting a course correction, where Brand Modi is set for an even bigger makeover; making it even more inclusive. Already, the current government’s raft of social empowerment schemes have made the otherwise economically disenfranchized poor a part of the formal economy. (Just like Uber drivers were forced to open a bank account to receive payments from customers.) Membership of the formal economy club is an aspirational goal for many; and their gratitude will be their vote.

“To ensure longevity going forward, his brand appeal needs to be as broad-based as possible and while divisive politics may be tempting, I do not believe that the majority of India will put the Hindutva ideology above economic development—especially not those who are economically deprived and, therefore, the most vulnerable," says Sinha.

But there is an associated downside risk. For people to continue to feed on Brand Modi, the PM will have to start generating tangible outcomes.

“Brand Modi’s equity is now strongly linked to Brand India’s equity and the next phase will be about tangible results, not promises," says Sanjay Sarma, co-founder and CEO of Design Worldwide, a strategic branding and creative solutions company.

In this, the single biggest deliverable is jobs—at the moment, the era of jobless growth, which began under the previous UPA government, continues to haunt the nation.

While the country adds 12 million to the workforce every year, the economy is able to absorb only a fraction, resulting in an army of unemployed.

So, when the 17th general election comes by in 2019, not only will Modi be judged as an incumbent, but also, most crucially, on his ability to frame policies and take decisions that will create jobs.

Subscribe to Mint Newsletters
* Enter a valid email
* Thank you for subscribing to our newsletter.
Topics
assembly-elections-2017 mint-asia mint-india-wire
First article
Close
Recommended For You
Feedback
Select your Category
Your Message
No Network
Server Issue
Internet Not Available