New Delhi: India’s economy grew in double digits twice during the previous United Progressive Alliance government (UPA) under Prime Minister Manmohan Singh, 10.23% in 2007-08 and 10.78% in 2010-11, according to back series calculations by a committee appointed by the National Statistical Commission.

However, the average gross domestic product (GDP) growth during late Prime Minister Atal Bihari Vajpayee’s time (1998-99 to 2003-04) has been brought down marginally to 5.73% from 5.9%. Vajpayee, who breathed his last on Thursday, was cremated on Friday with full state honours. 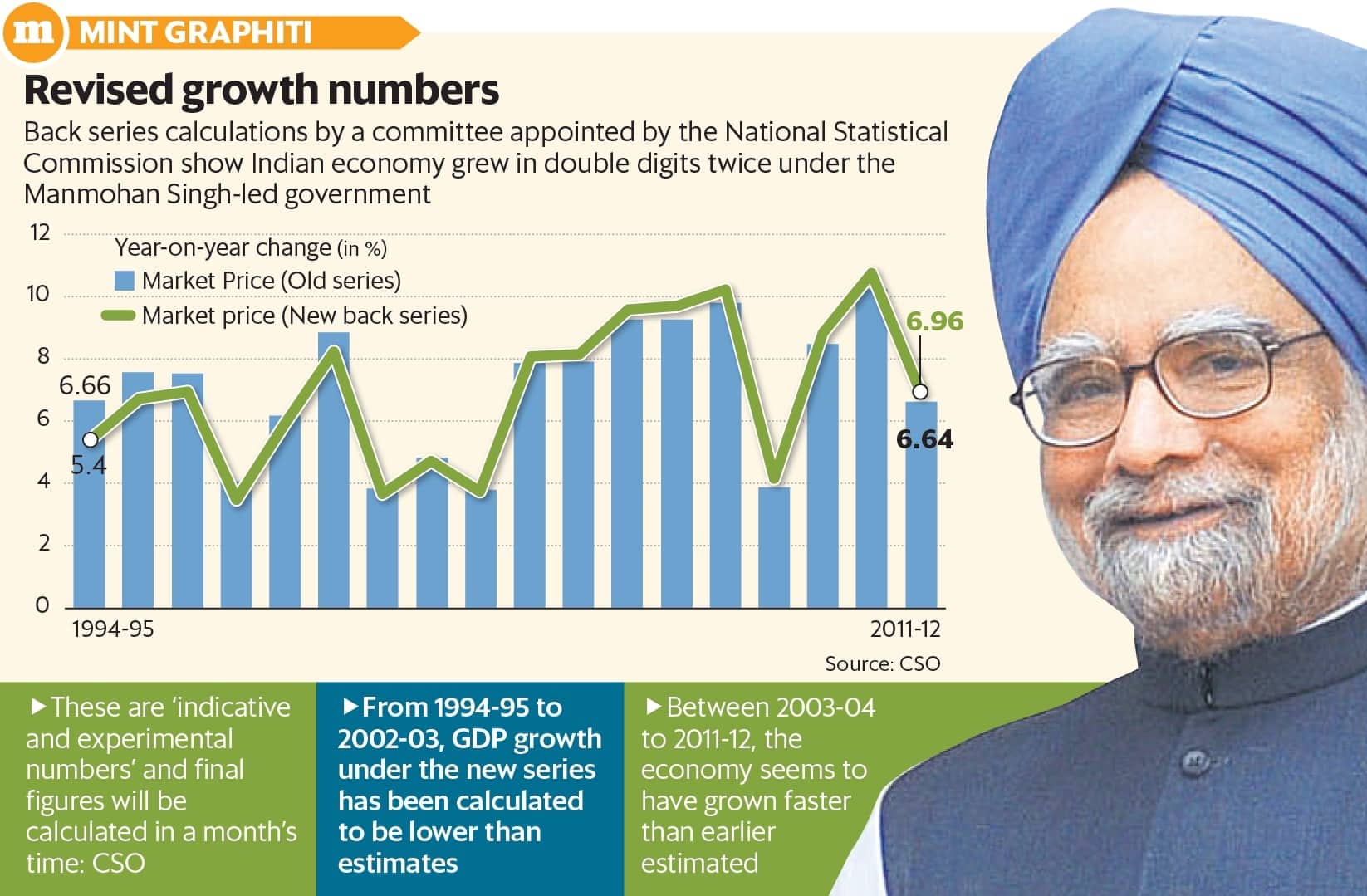 A Central Statistics Office spokesperson, however, said these are “indicative and experimental numbers" and final figures based on sectoral data will be calculated in a month’s time.

The calculations have been made by a sub-committee headed by N.R. Bhanumurthy, professor at the National Institute of Public Finance and Policy (NIPFP), within the committee on Real Sector Statistics headed by Sudipto Mundle, emeritus professor at the institute. Bhanumurthy was tasked to link the old and new GDP series through the back series data, which has been missing since the government shifted the base year to 2011-12 from 2004-05. The missing data had made if difficult for economists to make long-term GDP growth forecasts.

The estimates of GDP and other related aggregates for the period 1993-94 to 2013-14 have been calculated by the committee using a so-called production shift method. An advisory committee on National Accounts Statistics will now go through the calculations before it is finally vetted by the National Statistical Commission.

“While it is interesting to compare aggregate GDP growth, it is equally important to look at what caused it and whether it was supported by sustainable fiscal/monetary policies," said DK Joshi, chief economist at Crisil Ltd.

The sub-committee observed that in the case of GDP at market price, the revised series appears to be smooth and comparable to the new series. “However, when we look at the growth rates, there are some differences, although not significant, and this is largely because of the ‘discrepancy’ variable, which is found to be highly volatile," the committee added.

The real sector committee under Mundle, which also looked into sectoral statistics of agriculture, industry and services as well as micro-macro data linkages, recommended that artificial intelligence-based data cleaning and new big data sources such as internet, and point of sale data, should be used by all statistical authorities across the country for improving the data base of the Indian economy.

The Indian economy grew at the slowest pace in four years at 6.7% in 2017-18 under the twin blow of demonetisation of high value currencies and implementation of the goods and services tax.

The International Monetary Fund has projected that the economy will accelerate to 7.3% in 2018-19 with investment reviving and consumption demand remaining strong.