New Delhi: Despite widespread drought last year, farmers across India reaped a bumper harvest of horticulture produce with production crossing 283 million tonnes in 2015- 16, as per the third advance estimates released by the agriculture ministry on Monday.

This estimate is marginally higher than the 282.8-million- tonne second advance estimate released in May. The latest numbers show 0.8% growth over the 280.9 million tonnes produced in 2014-15.

The fact that horticulture crops are grown in about 10% of India’s gross cropped area, compared to over 50% of the area used to grow foodgrain, also signals the success of small and marginal farmers in growing more fruits and vegetables, driven by higher demand. 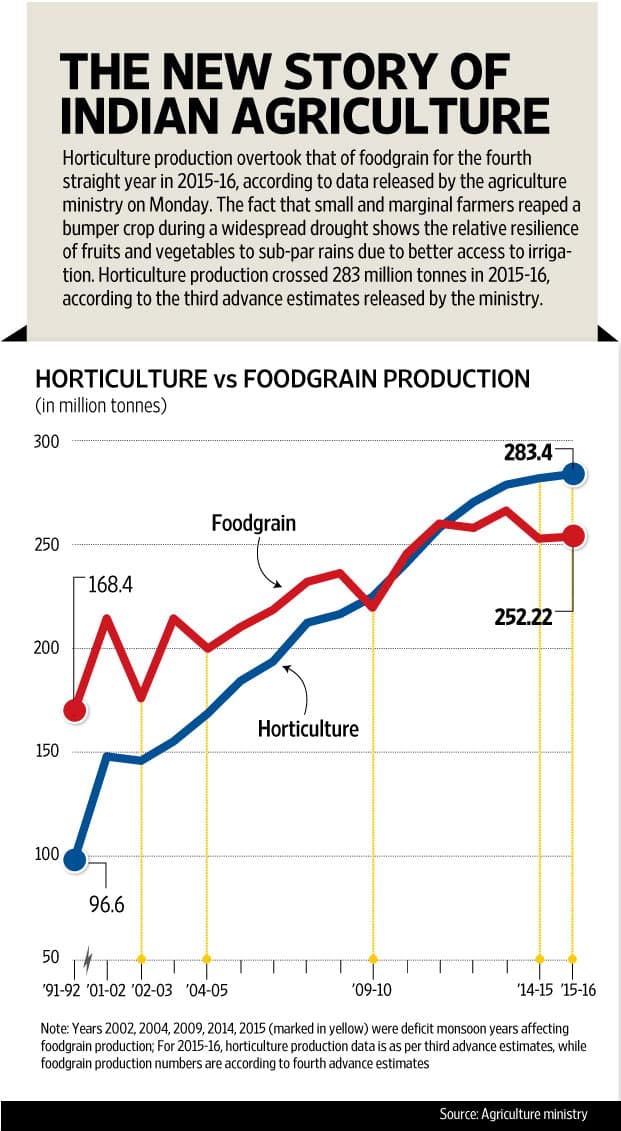 The data shows that Uttar Pradesh, Andhra Pradesh and Maharashtra are the top three fruit-producing states, accounting for nearly a third of India’s fruit production.

Further, the latest estimate shows that major horticulture crops, such as onion and tomatoes, saw robust production growth in 2015-16, despite a severe monsoon deficit that affected production of foodgrain, especially pulses.

According to the third advance estimate, farmers harvested 21 million tonnes of onions in 2015 -16, a growth of 11% over previous year’s production. The corresponding growth figure for tomatoes is 12%.

However, potato production fell by 9% during the year.

Previous data released by the farm ministry (in its Horticulture Statistics at a Glance, 2015) shows that unlike foodgrains, horticulture crops survive poor rain because they are better served by irrigation.

In comparison, only 50% of the area under foodgrains has access to irrigation. Barring wheat, an irrigated crop, irrigation access varies from just 16% for pulses to 59% for rice.

A growing market for horticulture crops and quicker cash flows have led farmers to grow more fruits and vegetables, said an official with the agriculture ministry, who did not want to be named. “Horticulture crops can be harvested in shorter durations compared to foodgrains. Many youngsters have moved into horticulture in states like Maharashtra, Karnataka and Haryana due to the promise of higher returns," the official said. “Now is the time to invest in post-harvest management and move away from increasing production."

“Horticulture has demonstrated its resilience to drought by producing more. However, one fears that this steady rise in output is also contributing to a corresponding rise in food loss," said Pawanexh Kohli, the chief adviser at the National Centre for Cold Chain Development, a think-tank under the agriculture ministry.

“The problem is that the higher production is not always reaching the end consumer due to inefficiencies in the supply chain, leading to price spikes," Kohli said. “The government is working to revamp cold chain infrastructure as a way to mitigate food loss and create more value for farmers."