Ten years on, where does the Domestic Violence Act stand?

New Delhi: He asked his mother kya isko khatam kar dun? (should I finish her off) when he thought I was sleeping," she says. This was nearly five months ago. The question frightened her enough into moving back to her parents’ house.

She is dressed in a simple salwar kurta; the red and yellow glass bangles on her thin wrists and a spot of vermillion on her forehead are markers of her marital status.

She is 23-years-old. “He" is her husband of nearly five years.

In the noisy lobby of the Delhi State Legal Services Authority (DSLSA), waiting for a lawyer to take up her case last month, the woman, who didn’t want to be identified, recounts the abuse and violence she has faced from her husband and his family over the last three-four years. She mentions starvation, three miscarriages, dowry demands and death threats.

She was referred to DSLSA by the Nanakpura (Delhi) Crime Against Women Cell.

Her case will be filed under the Protection of Women from Domestic Violence Act, 2005 (PWDVA).

The Act, a first of its kind law in India, came into force on 26 October 2006, over a year after it was passed by Parliament. This October, the law completes 10 years.

The function of the law was to be simple—address violence against women within the home.

For the first time, the new law stepped inside the home and dealt with private spaces of individuals—something the law had avoided doing until then—albeit selectively. It acknowledged that domestic violence is “widely prevalent but has remained largely invisible in the public domain".

PWDVA was passed on 13 September 2005, during the tenure of the United Progressive Alliance government. It’s a civil law aimed at providing a fourfold support system to women who have suffered violence at home: residence orders, custody orders, protection orders and monetary relief from a respondent. Before PWDVA, women could only seek recourse under the Indian Penal Code (IPC)—sections 304B (dowry death) and 498A (cruelty by husband or his relative).

The law was broad in its definition— “domestic relationship" includes married women, mothers, daughters and sisters.

The right to reside in a shared household, provided by the law, was considered a huge step towards empowering women, especially in a society where women often do not own property. One of DSLSA’s panel lawyers, Amarendra Chaubey, said that PWDVA provides “one platform for all kinds of reliefs". He added that criminal provisions like section 498A are not always used in domestic violence cases. “More effective, short-term relief is available under the PWDVA. The relief under section 498A may be added to the petition under PWDVA," he said.

PWDVA enshrines principles of the Convention on the Elimination of All forms of Discrimination Against Women (CEDAW), which India ratified in 1993. CEDAW’s 12th general recommendation required “the States parties to act to protect women against violence of any kind occurring within the family, at the work place or in any other area of social life".

PWDVA defined domestic violence for the first time. In keeping with international definitions, it didn’t restrict itself to physical violence alone.

The definition includes not just physical abuse, which is more identifiable and is easier to prove (for example, using medical records), but also aspects like emotional and sexual abuse. It even includes threat of violence as part of the definition.

This broad definition was a “major breakthrough", according to Jhuma Sen, assistant director at the Centre for Human Rights Studies, Jindal Global Law School, Sonipat, Haryana.

Significantly, PWDVA recognizes sexual violence within the confines of marriage. Marital rape, or sexual intercourse by a husband without the wife’s express consent, is an exception to rape under IPC. But PWDVA can come to the rescue of these women through protection orders or orders to stop violence.

For instance, a Jodhpur (Rajasthan) court in 2009 directed the husband to not argue with or threaten his wife when drunk. This would have to be followed by him. A violation of this directive would lead to action against the husband on criminal grounds.

Marital rape is an exception to rape under IPC, but the Domestic Violence Act comes to the rescue of victims through protection orders or orders to stop violence

The impact of the law, however, hasn’t been remarkable.

“If one looks at orders under the PWDVA, it will be noted that most orders do not specifically mention the category of sexual abuse even when alleged; when it is mentioned, the same is usually viewed through a patriarchal lens—from a moral viewpoint and less as violence or abuse," said Sen.

In fact, 10 years on, not much has changed in terms of awareness within the law enforcement agencies and the lower judiciary, say activists.

“The law in spirit has not been implemented. The law is very useful but states have failed in enforcement. If you look at districts courts, cases don’t come as socially they are not still acceptable. Even when they come, they (the courts) are not sensitive at all," said Ranjana Kumari, director at non-profit Centre for Social Research.

Violence within the home

Various studies and reports have attempted to bring domestic violence into public discourse.

A 2014 study by the United Nations Population Fund and the International Center for Research on Women found that 60% of men reported using some form of violence—physical, economic, emotional or sexual—against their wife or partner. Emotional violence had the highest prevalence, with 41% of men admitting that they had used it at some point on their wives or partners.

The National Crime Records Bureau introduced a category for offences under PWDVA in 2014, where 426 cases were reported. In 2015, this number increased to 461. There were 7,634 reported cases of dowry deaths and 113,403 incidents of cruelty against a woman by her husband or his relatives in 2015.

One of the first decisions by the Supreme Court, defining a shared household, was in the S.R. Batra versus Taruna Batra case, decided on 15 December 2006. Here, the court restricted the understanding of a shared household under PWDVA to property belonging to or rented by the husband. The apex court ruled that the law could not be interpreted in such a wide manner that it would cause “chaos in the society".

“It’s the single most important disaster in the field of domestic violence from the Supreme Court," said Indira Jaising, senior advocate and a former additional solicitor general of India and a pioneering force behind the law. “That judgment needs to go."

One of the main objectives of PWDVA was to secure residence for a woman; it was immaterial that she didn’t have title or ownership of such a shared household. A magistrate can pass orders for residence. However, after the apex court judgment, courts across the country could use it to dispossess a woman from her shared household, according to Sen.

It’s the single most important disaster in the field of domestic violence from the Supreme Court. That judgement needs to go- Indira Jaising, senior advocate and former additional solicitor general of India.

“In some warped reading, the court thought that a married woman would claim anyone’s house. The law is very clear in this respect," Sen said.

The Delhi high court, in April 2008, upheld the constitutionality of PWDVA in a case questioning its validity in light of being a gendered law (an aggrieved person under the law can only be a woman). The court also failed to find any problem with the broad definition of domestic relationship.

Yet, progressive as this decision was, judicial attitudes are still steeped in patriarchal norms, according to Sen of Centre for Human Rights Studies.

“The judiciary still has a long way to go. The judicial narrative on women’s rights within marriage in India has been woefully restricted to ‘lawful’ wives with little or no attention paid to other women in non-marital conjugal relationships—in relationships in the nature of marriage. Marriage is still viewed as a ‘sacrament’, an indissoluble union and less as a partnership of equals," she said. 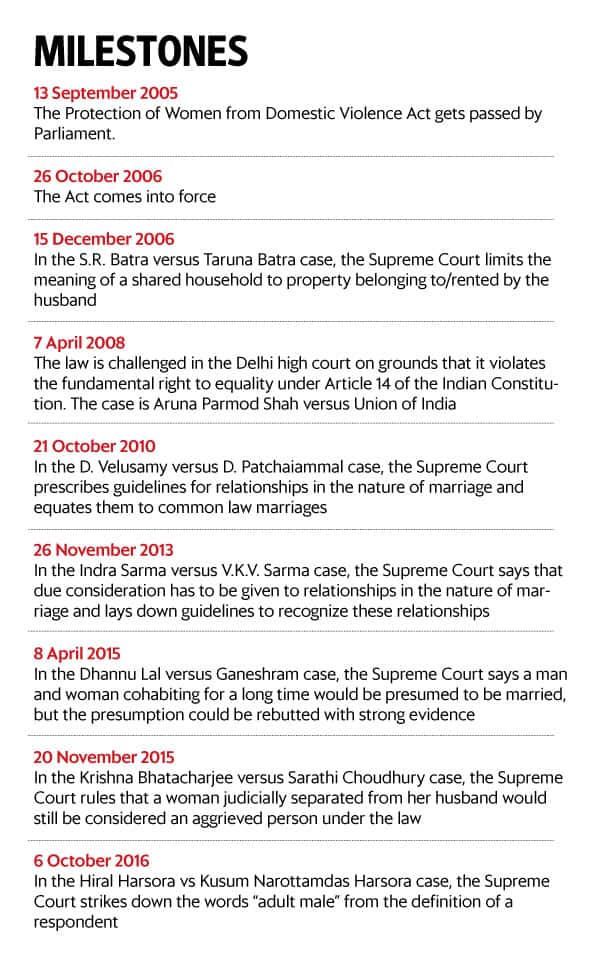 The Supreme Court, in a 20 November 2015 decision, ruled that a wife would be considered an aggrieved person under PWDVA even if she was judicially separated from her husband.

Significantly, on 6 October, the apex court struck down the words “adult male" from the definition of a respondent, meaning that wives or women in relationships akin to marriages can take legal action against female relatives of their husbands under PWDVA. The court found the law discriminatory and the difference between men and women perpetuating violence “microscopic" in a law aimed at protecting women from such harm.

Despite the fact that courts have often interpreted the law widely, practitioners believe that the law hasn’t had the impact that had been expected.

“They have helped, but very little. Much more was expected. The law was expected to provide security of immediate residence, but husbands are able to extend proceedings even for interim orders for several years," said K.T.S. Tulsi, a lawyer and member of parliament.

Kumari of Centre for Social Research said that cases sometimes took up to three years to be decided.

From accounts across the board, it is clear that the progress on the law from 2006 to 10 years on has been slow. It is also true that all that had been expected from the law has not been achieved yet.

“The law, when it was passed, was extremely futuristic for two reasons. One, it sought to collapse the gap between civil and criminal law. Two, it moved away from the adversarial system of justice and the judge was expected to have more of a role in an inquiry with the help of protection officers. That has not happened yet," said Jaising. “That’s where I would want the law to move. That’s my vision for this law."

In one of the small shared cabins of DSLSA offices, lawyer Chaubey agreed to take the 23-year-old woman’s case. It is likely to be filed within 15 days. Chaubey says this much time is needed to gather all the documents and information from the complainants so that a foolproof case can be built.

What next, now that Chaubey has accepted the case and got it registered before a magistrate?

Domestic violence is India’s most widespread crime against women with one reported every five minutes. Cases exceed molestation, rape and dowry deaths—reported from every corner of the country, from West Bengal to Gujarat. Yet, until 10 years ago, there was no legal definition of domestic violence, leave alone adequate legal redressal for women facing violence in their homes.

Approved by Parliament in 2005 and in effect since October 2006, the Protection of Women from Domestic Violence Act recognized, for the first time, domestic abuse as a punishable offence and provided relief through protection orders, residence orders, monetary relief and temporary custody of children.

Over the next few weeks, Mint will look at this landmark legislation to examine how it protects and grants relief to victims of domestic violence. Through the stories of women, we will look at the progress in the law as well as its shortcomings and the state of infrastructure, including shelter homes. We will look at social attitudes to domestic violence, and try and examine why some women continue to stay in abusive relationships and why domestic violence continues to be a blot on Indian society.