Chandigarh: Spread over a 25-acre campus, the Institute of Microbial Technology (IMTech) could well be nicknamed the poor man’s clot-buster lab. That may not be fair because the institute does more research even while it manages India’s micro-organism bank, but it is the blood clot-buster molecules coming out of the campus that are demonstrating, for the first time, that drugs can come out of government labs too. 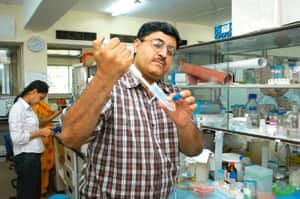 Still, director Girish Sahni, a streptokinase researcher himself who proudly displays two different vials of streptokinase that came out of his lab, looks a little impatient. Given India’s cardiac disorder burden, he is somewhat racing against time to take his next molecule to the market, a much superior drug that would considerably reduce the price of its equivalent, selling for as much as Rs50,000 a dose. “We are doing it slowly and surely, but we’d like to do it energetically and faster," he says.

For that, he needs funds and an institutional system that would give people like him money and the freedom to do, and even outsource, science. “Scientists and groups who have demonstrated excellence should be given a carte blanche. Somebody should, say, take $20 million and run with it," Sahni says, rather wistfully.

In 2006, he licensed clot-specific streptokinase to a US-based start-up Nostrum Pharmaceuticals Llc, which did the primate trials of the molecule in the US, since monkey studies are hardly done in India. Experts say looking for such partners takes time. Moreover, out-licensing at an early stage is also meagrely rewarding, financially. “Give me $2-3 million and I’d do such studies in six months," he adds.

“He (Sahni) is a very good scientist. What he is proposing is a novel way of looking at it (drug discovery), which requires political will and courage that is hard to come by," says Ashok Vaidya, research director of Kasturba Health Society in Mumbai, a public health institution founded by Mahatma Gandhi, which today also houses the Advanced Centre for Reverse Pharmacology of the Indian Council of Medical Research. But Vaidya says scouting for groups of scientists and granting them funds as well as freedom to do science is the way to nail the beast of drug discovery. “We are still not mature as a nation in this area."

Vaidya has struggled long. Even after getting a few drug candidate leads from plants, his colleagues didn’t quite succeed in isolating any molecule. He is on a firmer ground with a bioactive from a single plant that could prove to be the next anti-malarial after artemisinin, the popular and the only effective drug used today. However, when he approached the Bill and Melinda Gates Foundation for grants, he was told to “come with the molecule".

A few years later, though, Vaidya says he is “very close to the molecule". But this is the story of translating bench science to bedside benefits in many government labs.

In the process, sometimes, government’s loss is industry’s gain. Ramesh Bhonde did some pioneering work at the National Centre for Cell Sciences in Pune showing that stem cells from the fat-storing adipose tissues could reverse diabetes in mice. With the government not doing enough to retain retiring scientists, Bhonde moved to Stempeutics Research Pvt. Ltd, a stem cell company with the Manipal Group. As technical director, he has relocated to Malaysia to further his research and, meanwhile, Stempeutics has applied to the Indian regulator for stem cell trials in diabetes.

“Many times the importance and impact of pioneering work is either neglected or overlooked for which the scientist suffers the most," says Bhonde.

A few other research initiatives in government labs that are aimed at new drugs are only in preliminary stages. Avadhesha Surolia, director of the National Institute of Immunology in Delhi, is testing a new “controlled release" molecule for diabetes. While his non-disclosure agreement doesn’t allow him to talk about his work, he admits that Sahni serves as the beacon. “At this time Girish Sahni has the most experience."

In his capacity, Sahni is doing enough to further the cause of streptokinase research in the country. He licensed “natural streptokinase" to Cadila Pharmaceuticals Ltd in 2001 that brought STPase into the market. Then he licensed “recombinant streptokinase" to Shasun Chemicals and Drugs Ltd, which sub-licensed it to Lupin Ltd and Alembic Ltd who began marketing the drug in July as Lupiflo and Klotbuster, respectively. The next clot-specific streptokinase has been licensed to US-based Nostrum Pahrmaceuticals Llc. However, the “pegylated streptokinase" will be the most advanced—potent, targeted, easy-to-deliver, and eliciting lesser allergic reaction from the recipient.

With the West moving away from clot-busters as their healthcare system drives people to quicker and expensive angioplasty and similar interventions, Sahni says better quality clot-busters will remain the mainstay for many parts of the world. His next molecule, “healing streptokinase", one that prevents “reocclusion" or relapse of blockage occurring in around 25% of the patients, has passed the proof-of-concept stage. But what is still in the conceptual stage is his idea of public-funded, risk-laden, fast-tracked drug discovery.