Government health insurance schemes may have eased costs for the poorest, but the programmes have had a chequered record in India so far

New Delhi: The Ayushman Bharat-Pradhan Mantri Jan Aarogya Yojana (AB-PMJAY) launched in Ranchi on Sunday may well turn out to be India’s grandest experiment in state-funded health insurance, but it is certainly not the first of its kind.

Over the past few years, several government-sponsored health insurance schemes have been launched in the country—largely by state governments, but also by the centre (Rashtriya Swasthya Bima Yojana), and the evidence on their impact is mixed, a Mint analysis shows.

The analysis, based on data from the last National Sample Survey Office health survey conducted in 2013-14, shows that access to a government health insurance scheme may have had uneven effects across income classes and regions.

The good news is that access to such health insurance schemes appears to have reduced health costs for the poorest quintile (or bottom 20%) significantly. The impact on health costs is, however, less visible among other income groups.

More importantly, the analysis shows that an overwhelming majority of those facing catastrophic health expenditure are the uninsured, suggesting that access to health insurance may be offering some level of protection to those who need it.

Catastrophic health expenditure, here, is defined as a health shock that leads to annual expenses greater than the annual per-capita consumption of a household.

We use per-capita consumption expenditure to assess the extent of health shocks rather than overall household expenditure, since household sizes vary across income classes in India.

Among the poorest quintile, this figure is even higher at nearly 90%. 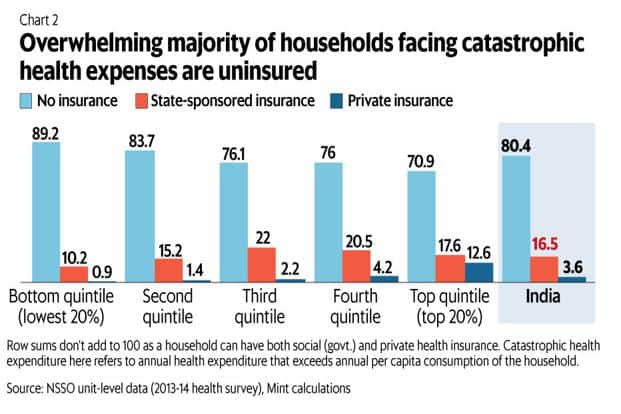 This suggests that India’s experiments with state-sponsored health insurance have been far from perfect.

A state-wise analysis shows that in three states with high insurance coverage—Telangana, Andhra Pradesh and Kerala—a majority of the relatively poor households facing a catastrophic health shock was covered under a government health insurance scheme. In three other states with a relatively high insurance coverage—Chhattisgarh, Odisha, and Rajasthan—roughly one-fourth of the relatively poor households facing a catastrophic health shock belonged to the ranks of the insured.

One reason for the high health expenses among the insured could be “health-seeking behaviour", a term health economists use to describe the increased access to medical care among newly insured households, which could raise medical bills beyond what is insured.

But there could be less benign reasons for the high expenses as well.

As researchers Jishnu Das, Yamini Aiyar and Jeffrey Hammer have pointed out in an article—‘Will Ayushman Bharat Work?’—on Centre for Policy Research’s website, in many cases, those with insurance cover are either denied services, or charged more than what is warranted.

Patients may be turned back when hospitals are not being reimbursed for their claims on a timely basis. Others may charge extra—off the books—when they have a monopoly on a certain procedure in a district, and know that monitoring is weak.

With increased coverage, both regulatory and fiscal pressures on the government increase.

Already, the claims ratio of insurers servicing state-funded insurance schemes has surpassed 100%, suggesting that the insurance payouts are higher than the premium collected, a May 2018 working paper by Ila Patnaik, Subho Roy and Ajay Shah of the National Institute of Public Finance and Policy (NIPFP) shows. The costs paid out by insurance companies will ultimately translate into fiscal costs, wrote Patnaik, Roy and Shah, pointing to the fiscal risks that lie ahead if insurance programmes are implemented without adequate fiscal analysis.

It is also possible that despite rising fiscal costs, out-of-pocket expenditure also continues to rise—partly because of increased “health-seeking", and partly because insurance cover makes it more lucrative to perform medical interventions and investigations, even when they are not really needed.

Avoiding such risks of moral hazard won’t be easy unless India revamps its regulatory and governance architecture for medical care.

This is the second of a four-part data journalism series on India’s healthcare challenge. To read the first part, click here.

Udayan Rathore is a research associate at the Delhi-based research group Collaborative Research and Dissemination.