Mumbai: People’s ownership of state-owned firms, the finance minister’s preferred term to describe the government’s divestment programme, will be one of the two big contributors Pranab Mukherjee is banking on to bring down the fiscal deficit to 5.5%. Buoyed by the success of this programme in tough market conditions this year, the Centre wants to raise Rs40,000 crore by selling its stake in state-owned firms in 2010-11. Market intermediaries say there is enough appetite for government papers and that it could end up raising more. 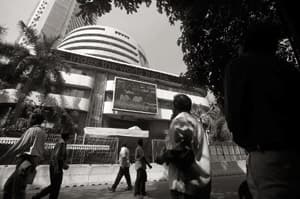 Target set: The Centre eventually expects to raise Rs40,000 crore in the next fiscal from divestment. Rafiq Maqbool / AP

Watch videos, play the budget game, and find out how the budget affects you. All that and more on Livemint.com’s exclusive Budget 2010 microsite.

This is the biggest and most ambitious target in the history of disinvestment programme that started in 1992. It is nearly thrice the target of 2003-04 (Rs14,500 crore) when Arun Shourie was minister for disinvestment in the Bharatiya Janata Party-led National Democratic Alliance government.

State-owned firms have so far raised Rs17,295 crore this fiscal through divestment and fresh issue of shares. This is more than what they had raised in 2003-04—a record Rs16,563 crore—after which divestment fell off the radar of the government following the ascension of the Communists-supported United Progressive Alliance government to power in May 2004.

The government eventually expects to raise Rs25,000 crore in the current year as the process of selling shares of National Mineral Development Corp. Ltd and Satluj Jal Vidyut Nigam Ltd to the market is on.

“The proceeds will be utilized to meet the capital expenditure requirements of social sector schemes for creating new assets," Mukherjee said in his Budget speech.

Prithvi Haldea, chairman and managing director, Prime Database, a Delhi-based primary market tracker, said though there is enough appetite for absorbing these government papers, the success of the coming issues will depend on market volatility and pricing. “The government cannot repeat REC (Rural Electrification Corp. Ltd) and NTPC (Ltd) any more. They have to provide 15-20% discount for retail investors."

Haldea’s reference is to the lacklustre showing of the NTPC share sale and eleventh hour success of the REC one.

“Negative news flowing in from China will divert FII (foreign institutional investors) flows into India and this will support the divestment programmes," he added.

India’s bellwether stock index BSE’s Sensex ended the day with a gain of 175 points or 1.08% even after surrendering half of what it had gained while Mukherjee was presenting the Budget. This is the best Budget day rally for the markets since 2005, when it gained a little over 2%.

Sensex earnings are pegged at above 20% for FY11 and if this continues, the investor sentiment towards share sales by state-owned firms will improve, Murugappan said.

Arun Kejriwal, director, Kejriwal Research and Investment Services Pvt. Ltd, said the market-friendly tone in the Budget is aimed at helping divestment. “This year, they planned to raise about Rs1,100 crore, but will end up raising much more. Next year, the target is Rs40,000 crore, but they may raise more."

At present, the bidding in follow-on offers takes place through an open book, where bids can be seen by all bidders.

In a closed book system, bidders can’t see other bids and this helps the issuer attract bids at higher prices.

In four of the five Budgets presented by the first UPA government, there was no official disinvestment target. But after the 2009 general election, the UPA came back to power without any support from the Left and disinvestment came back on its radar.

According to Bsepsu.com, at least 114 divestment offers are in the pipeline. These include 56 initial public offerings and 24 follow-on public offerings (FPOs) by Union government-owned firms, with the FPOs of National Mining Development Corp. and Steel Authority of India Ltd being the largest.

At least 19 public sector banks and five state-level public sector firms too plan to float public offers and these are part of the divestment road map.

Of the total of 214 Central public sector enterprises and their subsidiaries in operation, only 46 are listed. Of these, 44 are listed on BSE and account for 26% of the total market capitalization of the 4,883 companies listed on the exchange.

In addition, 26 public sector banks with their subsidiaries and six state-level public enterprises, account for another 5% of the total market capitalization of BSE.

Collectively, all state-owned firms with a Rs18.3 trillion market cap constitute 30.9% of the total market capitalization of BSE-listed firms.