Ghaziabad, Uttar Pradesh: As with anything to do with the Indian Railways, the numbers are fairly mind-boggling. The All India Railwaymen’s Federation (AIRF) has a membership of 957,524 and a reserve fund of Rs98.54 lakh, making it one of the country’s richest and most powerful trade unions.

The union’s support is also counted as a factor that can sway votes during elections, making political parties keen on keeping themselves in the AIRF’s good graces.

The railways, the country’s transport lifeline, has not seen any major disruption due to labour strife since 1974, when a three-week stir shook India’s economy, disrupting supplies of food, fuel and fertilizer, and sending prices soaring across the country. Thousands of workers were arrested and lost their jobs. (A year later the infamous Emergency was declared and among the boasts of its supporters was that the trains always ran on time.)

But the federation, affiliated to the Hind Mazdoor Sabha, has come under a shadow over a series of allegations, including that of forgery. Union members have been accused of harassing workers with engineered transfers and obstructing promotions, especially of those belonging to rival unions. It’s also being blamed for collecting membership fees without consent. AIRF members have also been accused of involvement in a group insurance case involving the deduction of premiums in the northern zone that runs into crores of rupees. 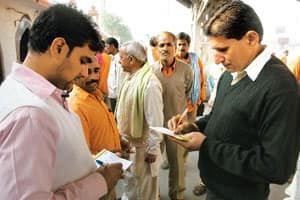 The accusations are being levelled by workers known as gangmen—who form the base of the pyramid in the railways, which has 700 different employee categories—who manually maintain the 63,273km of track across the country. The gangmen, so called because they work in groups, say the union has done little to ensure safety—and their lives—as deaths on the tracks rise.

Prithvi Pal was standing a few metres away when a speeding train mowed down four of his colleagues and a supervisor on 7 November, killing them instantly and leaving behind a mangle of dismembered bodies. “That was what was left of them. Only one body—that of the supervisor—was intact," recalled Pal.

The collision occurred 3km from Ghaziabad station in Uttar Pradesh when the New Delhi-bound Jan Shatabdi Express, travelling at 83km per hour, and two other trains passed within minutes of each other. The incident occurred five days after six gangmen died between Asawati and Palwal stations in Haryana, 30km south of the Capital.

Also Read | The First Three Stories of the Series

As the railways modernize and increase the number of trains to cope with rising freight and passenger traffic, officials, who are not allowed to speak to the media, admit to a shortfall of gangmen, who are desperately needed for daily maintenance work. Most cannot cope physically with the increasing amount of manual labour that they’re being asked to perform, they said.

Gangmen, who are also called track men, lay 700-800kg concrete slabs on the rail bed, pack gravel to level tracks and are on round-the-clock patrol to warn even of mild fissures on the lines that could be potentially catastrophic.

The country has at least 200,000 gangmen, half of whom belong to the underprivileged sections. Their chances of rising through the ranks are minimal because most of them don’t have educational qualifications. 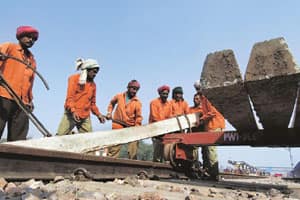 Lacking power: Gangmen say their issues aren’t addressed by the railway labour unions as they don’t have one exclusively of their own. Ramesh Pathania / Mint

“Who’s going to listen to our problems?" Pal said, tugging at his reflective orange waistcoat. “Giving us jackets is not going to provide us safety."

There is another dimension to the problem, said an official; many gangmen only exist on paper. For instance, 169 men are supposed to be working on a stretch of around 120km on the Delhi-Howrah route but only 67 workers report to duty; the rest are people who’ve not been seen or heard from for at least four years, said an official who didn’t want to be named because he’s not authorized to speak to the media.

According to the railways’ accident index, which is measured per million km, mishaps have declined from 0.22 in 2006-2007 to 0.21 in 2008. While the safety budget grew from Rs1,911 crore to Rs2,105 crore during this period, the railways doesn’t have the sanctioned number of officials.

The railway ministry reported a shortfall of 89,024 safety officers till March this year, according to a written reply in Parliament to a question posed by Bharatiya Janata Party member Kaptan Singh Solanki on 11 December.

Neither the railway ministry nor the trade unions know how many gangmen die every year. The railways’ annual report for 2007-08 puts the number of employees killed at 10.

The railways didn’t respond to an emailed questionnaire seeking its comments, but Harbhajan Singh Sidhu, president of the Northern Railway Men’s Union (NRMU)—the largest of AIRF’s 23 trade union partners across the country’s 16 rail zones—said at least 100 employees (gangmen and other workers together) die every year in the northern zone alone, stretching from Jammu and Kashmir to Uttar Pradesh. The railways is divided into 16 administrative zones.

“Accidents are happening because of shortage of staff while the number of trains are increasing," Purohit said.

Ashok Bhatnagar, former chairman of the railway board, rejected this contention and said safety measures are built into the railway system. “Accidents (involving gangmen) are not happening because of shortages," Bhatnagar said. Around 35,000 posts are vacant, according to a railway spokesperson.

Mohan Chand Sharma, who works at the Sarai Rohilla station in New Delhi, is disillusioned with the NRMU and said it doesn’t really have the workers’ interests at heart. “The union members never get transferred, so they are ready to please the officers." 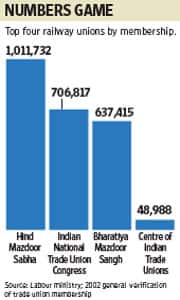 The gangmen say their issues aren’t addressed as they don’t have a separate union, and belong to groups that have several categories of workers.

Divisions among the workers along union lines became sharper when elections were allowed for the first time in the railways through secret ballot in 2007. Before this, only two-union based systems existed, dominated by the Hind Mazdoor Sabha and the Indian National Trade Union Congress (Intuc).

After a protracted court battle, the Bharatiya Mazdoor Sangh had been allowed to join the fray. The AIRF emerged victorious in the 2007 polls by winning at least 30% of the vote in 11 of the 16 zones; the Intuc won in nine; while the BMS retained one.

Ashok Kumar, an engine driver based at Patel Nagar station in New Delhi, said his troubles began after joining the Uttar Railway Kamdaar Union (URKU), affiliated to the Bharatiya Mazdoor Sangh. He has been transferred thrice over the past nine months, with a three-month stint at each location. “There is no complaint or chargesheet against me," Kumar said. “They want to prevent us from doing union activity."

At the Delhi Cantonment station, a few kilometres from Sarai Rohilla, gangman Pratap Singh said nobody can question union men when they arrive to collect membership fees. “If we don’t pay immediately, they come back later and give us the receipt," he said, with the workers being forced to pay up.

This year, the NRMU collected several separate fees from workers—Rs100 for union membership, Rs100 for its parent Hind Mazdoor Sabha and another Rs200 in October for retrieving bonus payments from the railways. With 121,660 members in the northern zone, that works out to Rs4.87 crore for the year. The NRMU is the largest of AIRF’s 23 unions.

The insurance case against the AIRF cited earlier involve deductions made from workers’ salaries for premium payments for a group life policy that ceased to exist at least seven years ago.

In 1998, the Northern Zone Railway Employees Credit and Thrift Society, a workers’ cooperative, struck a deal with Life Insurance Corp. of India (LIC) for a group policy at a monthly premium of Rs50 per worker.

The policy lapsed in 2002 as the society did not pay the premium or provide data about members to the insurer, according to a 2006 letter from LIC. The premium, however, continues to be deducted from the 70,000 society members, of which 60-70% are gangmen.

All the 21 directors of the society are members of the NRMU. A lawsuit was filed against Anil Rajpal, the society’s chairman, by Ashwini Kumar, a former society employee, in 2006.

AIRF president Purohit said he’s aware of the LIC case. “The investigations are on."

NRMU president Sidhu could not explain why no action was taken to stop deductions from salaries of workers towards a ceased policy. “We are raising complaints too."

Kumar said the workers’ illiteracy was used to bilk them. “It’s simple. The gangmen can’t read or write. They can’t calculate percentages of deduction. So they are exploited," said Kumar, who was suspended from the society in 2005 without a chargesheet. Sidhu said he was removed on corruption charges.

Meanwhile, gangman Ram Balbir Singh, whose brother Ram Ratan was killed in the 7 November accident, is knocking on various doors as he seeks payment under the LIC policy. His brother is survived by a wife and two boys, aged 16 and 10, who have received compensation of Rs2.5 lakh from the railways, apart from a separate relief grant of Rs20,000.

He still doesn’t know the policy has lapsed. “We have not been given any LIC policy number, so we don’t know how much the family will get."