Retail inflation eases to 3.31% in leeway to RBI to hold rates

While retail inflation unexpectedly eased to a 13-month-low in October, the volatility in IIP indicated that industrial recovery remained uneven and fragile

New Delhi: The Reserve Bank of India (RBI) is likely to keep interest rates unchanged in its bimonthly monetary policy review on 5 December, with retail inflation unexpectedly easing to a 13-month low in October, driven by lower food prices.

Data released by the statistics department showed that the consumer price index (CPI)-based inflation rate slowed to 3.31% in October from 3.7% a month ago, on the back of lower prices of pulses, vegetables and sugar, while factory output—measured by the index of industrial production (IIP)—decelerated to 4.5% in September from a revised 4.7% in the previous month as manufacturing growth eased. 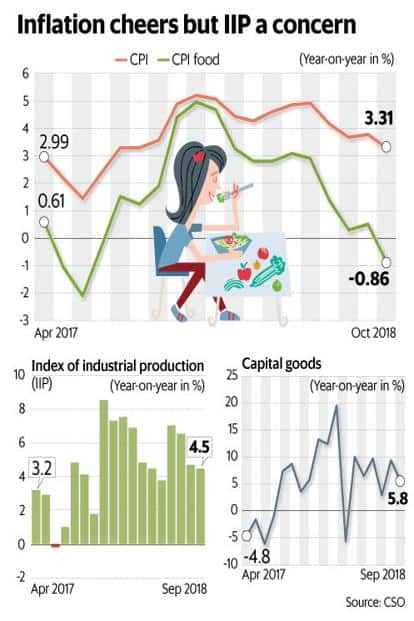 After two successive hikes, RBI’s monetary policy committee (MPC) kept interest rates unchanged on 5 October, citing a benign inflation trajectory and downward revision of inflation projections. The MPC also lowered its inflation projection to 3.9-4.5% from 4.8% for the second half of this fiscal, though it highlighted the need to keep a close vigil on prices over the next few months, citing several upside risks.

A weaker rupee, higher crude oil prices and increase in minimum support prices for farm produce were expected to put pressure on retail inflation, along with uneven distribution of monsoon rainfall that may limit kharif output in the months ahead.

The decline in food prices signifies that government procurements are yet to pick up one month into the harvest season.

However, core inflation, which excludes volatile food and fuel prices, remained sticky at 6.1% in October, led by the services sector and is likely to keep RBI worried.

With a favourable base effect in the next two months and lower crude oil prices, Madan Sabnavis, chief economist at Care Ratings, expects status quo on interest rates in the next policy review in December. “However, with a reversal of these effects and recovery in food prices, CPI inflation would move towards 4.5% by March and can trigger a rate hike if expectations rule higher," he said.

The volatility in IIP indicates that industrial recovery remains uneven and fragile. While anti-diabetic drugs, cement clinkers and commercial vehicles led IIP growth, television sets and air filters proved to be drags on factory output. In the first six months of this fiscal (April-September), IIP has registered 5.1% growth against 2.6% during the same period a year ago, mostly driven by robust growth in consumer durables, capital and infrastructure goods.