Benghazi: The vice chairman of Libya’s National Transitional Council confirmed that ousted leader Moammar Gadhafi had been killed on Friday and said the interim government would announce the liberation of Libya “within hours". 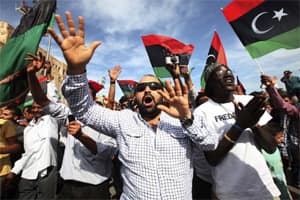 Libyans celebrate at Martyrs square in Tripoli 20 October, 2011 after hearing the news that Moammar Gadhafi was killed in Sirte. Reuters.

“We announce to the world that Moammar Gadhafi has been killed at the hands of the revolutionaries," Abdul Hafiz Ghoga told a news conference in Benghazi. “We will announce the liberation of Libya within hours, maybe sooner."