Home / Lounge / Design: a new business strategy
Back
Share Via

Mumbai: Revathi Kant seems to have a job to die for.

The 40-year-old head of design for Titan Industries Ltd, India’s leading watch manufacturer, leads a team of 25 product designers who routinely spend time at exotic destinations, chocolate factories and spas. These “immersion trips", she says, allow designers to acquire and imbibe real-life insights that could strike a chord with consumers and help differentiate Titan in the marketplace.

If that job description sounds breezy, consider its other aspect: Kant’s team is responsible for generating as many as 500 new products, across nearly 15 watch collections, every year, for Titan’s multiple brands. This is heavy lifting. It demands astute co-ordination with marketing and manufacturing teams, and keen monitoring of the product development calendar to ensure that collections are delivered on time, while meeting cost and quality parameters. The journey from drawing board to retail store includes 14 developmental milestones for every new watch, requiring Kant to be diligent and thorough. Bhaskar Bhat, Titan’s chief executive, characterizes a design manager’s job as “a combination of design sensitivity, management capability, and customer orientation."

Interestingly, even though Kant is responsible for driving new product design, she isn’t a designer. With nearly 20 years of experience in marketing and consumer-facing functions, she is an example of a new breed of design managers, a function increasingly critical to certain sections of the Indian corporate world.

A handful of Indian companies are already adopting product design as a potent weapon to fend off competitors and integrating the discipline into their business strategies. In doing so, they are elevating their in-house innovation units—whether design studios or research and development (R&D) centres—and cross-pollinating them with the rest of the organization.

Kant sits on Titan’s watch business council (the company’s leadership team for its watch division), alongside the heads of manufacturing, commercial and its three key brands, Titan, FastTrack, and Sonata. She believes a design head with a management background has enabled the studio to become “more scalable, organized and process-oriented," and function as a cohesive team, rather than as a collection of talented individuals.

There are several compelling examples of how product design has come to occupy centre stage in many companies that sell branded products to Indian households. Pawan Goenka, president of Mahindra and Mahindra Ltd’s (M&M) automotive and tractors businesses, spent 14 years at General Motors’ engine research centre in Michigan—making him one of the few Indian business heads with extensive R&D experience. He is widely acknowledged as the driving force behind the Scorpio, M&M’s passenger utility vehicle, and the company’s single biggest investment in a new product at the time ($120 million, or Rs558 crore, according to a Harvard Business School case study).

Fortified by the Scorpio’s success, (over 200,000 have been sold to date), the company is now working on a “half a dozen Scorpio-sized projects", with project teams that are “single-mindedly focused on meeting cost, delivery and quality targets", he states.

The company has evolved its own template for developing and launching new products: the Mahindra New Product Development Process, a structured approach to innovation, which Goenka believes “would compete with anyone’s process." Human capital investments in this function have kept pace with strategy. A new, purpose-built facility in Chennai will accommodate a 1,500-strong, multidisciplinary product development team, with specialists in design, engineering, sourcing and manufacturing.

The country’s oldest furniture manufacturer, Godrej and Boyce Manufacturing Co. Ltd, is flaunting a new “designer" line to upgrade its middle-class audience. In February, the company launched a new range of kitchen cabinets, sofas and steel cupboards, wrapped in visually striking graphic patterns by Krsna Mehta, a textile designer. “We wanted to bring the designer element to the mass market, without making it too expensive, for those who cannot afford interior designers", says Anil Mathur, chief operating officer of Godrej & Boyce. 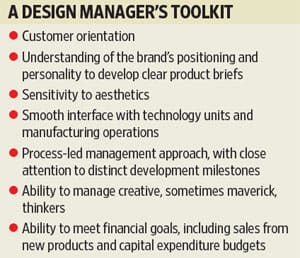 Others are waging bets on technological innovation, a bulwark of product design. Tata Chemical Ltd’s Innovation Centre outside Pune is an intriguing example of a commodity manufacturer seeking to leverage biotechnology and nanotechnology for business expansion. “It is a leap of faith for the Tata group," admits Murali Sastry, Tata Chemical’s chief scientific officer, adding “our focus is not just world-class R&D, but a mandate to generate completely new business opportunities."

Tata Swach, a low-cost water purifier whose cartridge contains rice husk ash blended with nano silver particles, was the centre’s first product launch in December. It is a ground-breaking attempt to tackle India’s clean drinking water crisis. Up next are “a few prebiotics products", says Sastry, to be launched “in a year’s time." Prebiotics are food ingredients that stimulate the growth of those bacteria in the digestive system that have health benefits.

These developments are encouraging in a country where product design has historically not been considered an essential ingredient of marketplace or financial success. Across the world, draftsmen, craftsmen, inventors and engineers have designed products for centuries, without referring to themselves as “product designers".

The use of the terms “product designer" or “industrial designer" only became popular in Europe and the US in the 1930s, with the advent of mass production techniques. The establishment of several design schools in that era, particularly Germany’s short-lived but iconic Bauhaus, also helped product designers gain currency within the manufacturing sector.

In India, the evolution has been more stilted. For a start, design as a term of reference is largely equated with fashion, jewellery, architecture and home interiors, connoting artisanal or boutique enterprises and less relevant to corporate vocabulary.

Although product design has been taught at the National Institute of Design (NID), India’s premier design school, for nearly 50 years, its graduates faced limited avenues for several decades. “Nobody wanted product design in 1988, when we started," acknowledges Satish Gokhale, an award-winning product designer and NID graduate. “There were no design departments in companies in 1990," recalls Ashish Deshpande, also an NID alumni and co-founder of Elephant Design, one of the country’s largest design consultancies.

The increase in competitive pressures after the Indian economy was liberalized nearly two decades ago helped design establish itself as a vital component of the corporate value chain, particularly in consumer and lifestyle industries.

Sandy Speicher, director of design for learning at Ideo, arguably the world’s most reputed design consultancy, perceives a heightened understanding of the design process in Indian companies. “Companies are moving from saying, ‘We just need to hire a designer,’ to realizing that the mindset of the designer must permeate throughout the organization, to all those involved with its products," Speicher says.

Kishore Biyani, founder of Future Group, one of India largest retailers, advocates this holistic approach to design: “For every problem, there is a design solution." Biyani has invested in two design firms, the Mumbai-based DMA Yellow Works and the Bangalore-based Idiom. He devotes an entire section of his autobiography, It Happened in India, to design management, where he states: “Design is a user-focused, prototype-based development tool that can make our organization adapt to the fast-changing external environment."

Measuring the value of design

As with every other corporate activity, product design has to earn its place in a company if it is not to end up as a bells-and-whistles sideshow. Titan and Godrej & Boyce calibrate success by setting target benchmarks for sales from new products and allocate specific budgets to design resources. M&M sanctions new product development projects only when they meet threshold rates of return and fit in with the group’s overall expenditure plans. Tata Chemicals planned the capital investment in Swach in stages, correlated to its market penetration and sales volumes.

But the larger prize is enhanced brand value and increased global might. BusinessWeek’s latest ranking of the 50 most innovative companies globally lists only two Indian groups—Tata and Reliance, both familiar entities. There are four from China (and as many as from Japan) including a highly ranked new entrant, BYD (Build Your Dreams), which makes cellphone batteries, green cars and solar panels. As Indian companies cast a wider geographic net, they may find that design and innovation are their best hopes to land more fish.

This is the first of a five-part series on the growing role of product design in Indian industry.