Home >Politics >Verdict eases intervention for gays, but is not enough

Verdict eases intervention for gays, but is not enough

Verdict eases intervention for gays, but is not enough

Bangalore: Veena S. starts with a prepared discourse while the police officers holler and hoot. She perseveres irrespective of the bellicose atmosphere in Upparpet police station in central Bangalore. She tells the tale of hijras and kotis, both traditional South Asian transgender communities whom the police often harass. She explains their origins, their way of life, and bemoans their fate, ostracized from society. An hour into the session, the 30-odd constables and sub-inspectors are patient, attentive and concerned.

“Police responsibility is not just towards the general public, but also to minority communities," explains Veena, advocacy programme coordinator at Samara, a Bangalore-based non-profit that works on raising awareness about HIV in the sexual minority community, a large section of which is illiterate, unemployed and excluded from society.

She started the police sensitization programme in October with the Whitefield police station in east Bangalore, and aims to cover the 100-odd police stations in the city. 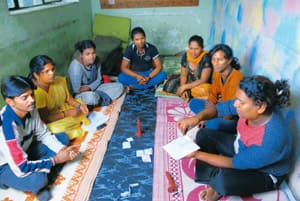 Awareness drive: A condom demonstration with gay and transgender people at the offices of Samara. Hemant Mishra / Mint

Veena’s work would not have been possible if it weren’t for the recent Delhi high court verdict decriminalizing homosexuality in India. In July, the court gave a landmark verdict and read down Section 377 of the Indian Penal Code. The court found a need to give the sexual minority community, which includes gays, lesbians, bisexuals and transgenders, due respect and a need to identify and openly work with them on HIV awareness and prevention. The British had drafted the old law in 1860 and though the UK legalized homosexuality in 1967, India held on to it until now.

The MSM, or men who have sex with men, group is considered the most vulnerable to HIV. In fact, according to a report in August from the US government agency, Centers for Disease Control and Prevention, MSM is the only risk group in the US “in which the annual number of new HIV infections is increasing", while new infections in heterosexuals are declining. Comparative data for India could not be found, but a UNAIDS report released on 24 November says 90% of the HIV cases in India are sexually transmitted.

The high court verdict, say experts, has facilitated a much-needed focused approach. The National AIDS Control Organisation, or Naco, along with a non-profit, Hindustan Latex Family Planning Promotion Trust, and India’s largest condom maker, HLL Lifecare Ltd, has tested a condom aimed at the homosexual community that’s 60% thicker than the regular condom and comes with a tube of lubricant.

Non-profit bodies such as Samara in Bangalore and Naz Foundation in Delhi say their work on awareness-building, HIV testing and condom distribution with the sexual minority community is easier and unhampered thanks to the verdict. “Police harassment is less nowadays," says Anjali Gopalan, founder and executive director of Naz Foundation, which challenged Section 377 in the Delhi high court. “Community-building is also possible. Only if people value themselves can they care and protect themselves (from HIV)."

However, there are still limitations, since Section 377 is yet to be altered; the court has only read down the law. For instance, Delhi-based non-profit AIDS Awareness Group has held AIDS awareness sessions in India’s largest prison complex, Tihar, in Delhi, but has been unable to distribute condoms in jails as yet.

“The law has to be changed to distribute condoms in jails," says Elizabeth (who goes by a single name), director at AIDS Awareness Group. “The law ministry has to approve the change in law and gazette it." Her organization works across communities handing out 50,000-60,000 condoms every month, mostly in GB Road, a red-light district in Delhi.