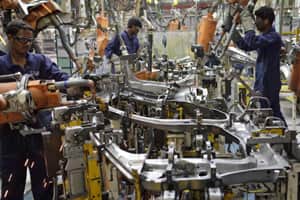 “The optimism displayed by FIIs in the Indian corporate growth story arises from the fact that the Indian economy remained relatively insulated from the global economic meltdown mostly on account of the strong domestic consumption, thrust on infrastructure development and a strong banking system," ICICI Direct Research Head Pankaj Pandey said.

The resilience of the Indian economy reaffirmed the faith of FII investors who have increased their holding in Indian companies.

However, in 2011, FII investments in equity were volatile with a cumulative net outflow of ₹ 3,358 crore. In the first three months of 2012 has seen a deluge of investment with FIIs pumping funds to the tune of ₹ 44,500 crore.

After March, a combination of poor global sentiment and local macroeconomic factors have impacted the Indian stock markets and FII’s appetite for stocks. However, in terms of sectoral exposure, banking has maintained its position as the top allocated sector during the last nine quarters, while IT sector has been most stable in terms of allocation.

The real estate sector, however, after the initial euphoria, has seen lower allocation over the last nine quarters.

Individually, banking space has been able to maintain its top allocation with a 10.9% stake in March quarter, although the quantum has come down from the high of 13.2% in December 2008 after the global meltdown in the second half of that years.

The telecom sector too witnessed a dip in holding from 5.8% to 4.5%. IT sector also has witnessed a decline in FII holding from 4.6% to 3.6% as there is weak visibility on global spending. On a quarter-on-quarter basis, FIIs were bullish on the capital goods and IT sectors and increased their allocation to these areas, while they reduced exposure to the power and telecom sectors. However, FIIs have increased aggregate holdings in BSE 500 companies, while promoter and mutual fund holdings have decelerated in these companies. Promoters’ holding on an aggregate basis came down to 57.8% in March 2012 from 60.4% in March 2010, while domestic mutual funds have reduced their holding in the companies to 3% from a total of 3.5 % in March 2010.