Home > politics > news > Europe could be in worst hour since WWII : Merkel

Europe could be in worst hour since WWII : Merkel

Europe could be in worst hour since WWII : Merkel

Rome/Athens: German Chancellor Angela Merkel said on Monday that Europe could be living through its toughest hour since World War II as new leaders in Italy and Greece rushed to form governments and limit the damage from the euro zone debt crisis.

Financial markets on Monday took heart on relief that a key Italian bond auction drew decent demand from investors and hopes that new leaders in Greece and Italy would take decisive action to breathe new life into their sick economies. 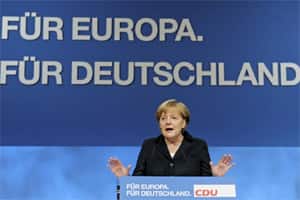 German Chancellor Angela Merkel says the European Union must be strengthened to overcome the bloc’s debt crisis on Monday. AP

But in a one-hour address to the Christian Democrats (CDU), Merkel offered no new ideas for resolving the crisis that has forced bailouts of Greece, Ireland and Portugal, and has raised fears about the survival of the 17-state currency zone.

“If the euro fails then Europe fails, and we want to prevent and we will prevent this, this is what we are working for, because it is such a huge historical project," Merkel said in the east German city of Leipzig.

In high drama in Rome, the president of Italy asked former European commissioner Mario Monti on Sunday to form a government to restore market confidence in an economy whose debt burden is too big for the euro bloc to bail out.

There was some respite for the euro on Monday morning after the Italian Treasury paid a record 6.29% yield to sell five-year government bonds in the first auction held after Monti was asked to head an emergency government.

Italy, which last week saw its borrowing costs rise sharply past the 7% level that has triggered international bailouts of Ireland and Portugal, sold the maximum targeted amount of €3 billion ($4 billion).

The European Central Bank began buying Italian government bonds as yields rose in the wake of the bond auction.

The appointments of Monti and Greece’s new prime minister, Lucas Papademos, were greeted with optimism and European shares recovered slightly in choppy trade but caution was ingrained and hard to erase.

“Although there is some progress in both Italy and Greece, there are still a lot of concerns, prompting investors to cash in on early gains," said Joshua Raymond, chief market strategist at City Index, highlighting the deep-seated concerns.

Berlusconi made a parting call on Sunday for the European Central Bank to become a lender of last resort to prop up the euro. “This has become a crisis for our common currency, the euro, which does not have the support that every currency should have," he said in a video message.

ECB policymakers have made plain they want to keep the onus on governments to bring their debts under control and have rebuffed world leaders who want the bank to ramp up its intervention on bond markets to defend Italy and other vulnerable debtors.

While Italy’s problems and the long-drawn-out departure of Berlusconi have pushed the collapse of the much smaller Greek economy backstage, IMF and European leaders will keep Papademos under pressure to implement radical reforms.

Papademos succeeds George Papandreou, whose proposal to hold a referendum on the country’s bailout terms prompted EU leaders to raise the threat of a Greek exit from the currency bloc.

The new Greek leader, a former central banker who oversaw his country’s entry to the euro zone in 2002, must win a Wednesday confidence vote in his cabinet before meeting euro zone finance ministers in Brussels on Thursday, state television reported, where he will be expected to outline next year’s draft budget before putting it to parliament.

Papademos faces off with protesters

Opinion polls show Papademos has the support of three in four Greeks. But he was facing his first protest in front of parliament on Monday afternoon from left-wing demonstrators who accuse the new government of working in the interests of bankers.

Inspectors from the “troika", the International Monetary Fund, European Central Bank and European Union, start arriving in Athens on Monday, piling pressure on Greece to qualify for a second bailout worth €130 billion ($180 billion) and an €8 billion tranche from the earlier bailout, needed to finance bond payments due at the end of the year, according to Reuters data.

Greece said on Monday it had raised €380 million ($522 million) from the sale of mobile telephone frequencies to its three main cell phone operators. The sale forms part of the country’s plan to sell €50 billion of state assets over the coming years to repay its debt.

But in a sign of problems faced by the Athens government, German construction group Hochtief revealed it may have to take a financial hit on the value of its road contracts in Greece due to mass toll dodging by Greek motorists.

In addition, the leader of Greece’s main conservative group Antonis Samaras said on Monday his New Democracy party would not vote for any new austerity measures and said the mix of policies demanded by international lenders should be changed.

“We will not vote for any new measures," Samaras told a meeting of his own MPs.

He added that he would not sign any letter pledging a commitment to austerity measures, as has been demanded by EU Economic and Monetary Affairs Commissioner Olli Rehn, and that a verbal pledge should be sufficient.

Rehn has said the EU and IMF will not release the tranche without written assurances from all Greek parties that they will back the measures.

In Rome, people sang, danced and opened bottles of champagne, and an impromptu orchestra near the palace played the Hallelujah chorus from Handel’s Messiah when news spread on Saturday that the scandal-plagued Berlusconi, one of Italy’s richest men, had resigned.