Thanks for Visiting Mint
You seem to have an Ad Blocker on. Please turn it off in order to continue, or whitelist Mint
HOW TO TURN OFF AD BLOCKER
OR
REFRESH IF YOU ALREADY TURNED OFF THE AD BLOCKER
Home >Industry >The alarming deficit in stormwater drainage in urban India

The alarming deficit in stormwater drainage in urban India

The last time the ministry of urban development surveyed for stormwater drains in 13 states, the coverage was below 50%

Development in urban India is swallowing soft landscape, nature’s absorbent for rainwater. And the man-made alternative, stormwater drains along roads, faces major deficits in urban locations. The last time the ministry of urban development surveyed for stormwater drains in 13 states, the coverage was below 50%—a level the ministry terms as “immediate action for improvement"—in 56 of 104 cities and in 745 of 1,383 urban areas that responded.

The ministry, for 2010-11, surveyed 13 states for various indicators in urban water and sanitation. One of these was stormwater drainage. Here, coverage was defined in terms of the percentage of road length covered by the stormwater drainage network; further, only those drains made of pucca (permanent) construction were considered. A total of 1,383 urban local bodies (ULBs) responded, of which 104 were municipal corporations/nagar nigams in large cities. As many as 56 of these 104 large cities had coverage below 50% (a level termed by the ministry as needing “immediate action for improvement") and 93 had coverage below 75% (“caution for improvement"). 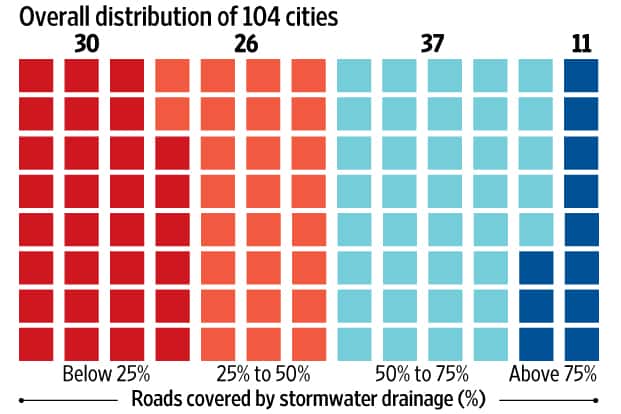 All 1,383 respondent cities/towns from 13 states

Stormwater drains, which are designed to address high rainfall concentrated in a short period of time, face clogging with garbage and sewage. That is, when they exist in the first place; often they don’t. So, the city gets deluged even if it receives less-than-normal rainfall. In half the 1,383 cities/towns that responded to the survey, stormwater drainage coverage was below 50%; in 1,142, it was below 75%. Odisha, Kerala and Chhattisgarh were the worst among the states. Among the better ones, relatively speaking, were Maharashtra, Rajasthan and Andhra Pradesh. The importance of stormwater drainage to a city increases in the context of changing weather patterns such as erratic and uneven rains (see charts) and more rainfall in a single day. According to data from knowyourclimate.org, the number of days in Mumbai with rainfall above 40 mm has increased by 2.78% over a decade. As has the number of days above 60 mm and 80 mm, by 3.21% and 3.56%, respectively.