WPI inflation falls in March to lowest in 9 years

In March, the Wholesale Price Index (WPI)-based inflation stood at -2.33%, against -2.06% in February, as prices of fuel and manufactured products continued to fall from year-ago levels.

The wholesale price deflation is unlikely to influence the course of monetary policy as the Reserve Bank of India (RBI) is solely targeting retail inflation to decide on the direction of interest rates.

Retail inflation surprisingly eased to a three-month low in March as food prices softened, despite the damage to the spring harvest in more than 14 states following unseasonal rainfall and hailstorms in the month, raising hopes of further monetary easing by the central bank in its next policy review in June.

Retail prices rose 5.17% in March, slower than a 5.37% increase in the preceding month, the ministry of statistics said on Monday. Food inflation slowed to 6.14% in March from 6.88% a month ago. 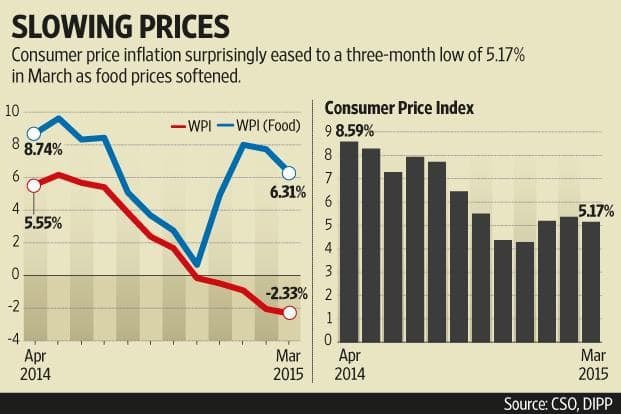 RBI kept its benchmark policy rate unchanged at 7.5% on 7 April and said it would wait for banks to pass on interest rate cuts that had already been announced before further easing.

Some of the biggest banks in India have pared their base rates marginally since then.

RBI governor Raghuram Rajan, in his monetary policy statement, cautioned that there were upside risks to the central projection emanating from possible intensification of the El Niño weather phenomenon that affects monsoon rainfall; large deviations in vegetable and fruit prices from their regular seasonal patterns, given unseasonal rains; and larger-than-anticipated administered price revisions.

Geopolitical developments leading to hardening of global commodity prices and spillover from external developments through exchange-rate and asset-price channels were other risks cited by the governor.

“However, at this juncture, these upside risks appear to be offset by downsides originating from global deflationary/disinflationary tendencies, the still soft outlook on global commodity prices, and slack in the domestic economy," Rajan added.

The chances of the El Niño phenomenon—which is strongly associated with lower rainfall in India’s monsoon season—occurring this year have risen to 70%, the US government’s weather forecaster said on Thursday.

The US National Oceanic Atmospheric Administration in its earlier advisory in March had predicted a 50% chance of El Niño continuing in the northern hemisphere summer, which was in line with the forecast of Australia’s Bureau of Meteorology.

The International Monetary Fund, in its Global Financial Stability Report, said on Wednesday that some economies, including India, were benefiting substantially from the impact of lower oil prices, thus increasing the monetary policy space.

“India and South Africa, for example, are expected to have inflation decelerate to their target bands by the end of 2015. As net commodity-importing economies, India, and to a lesser extent Turkey, are expected to reduce their external imbalances and have a chance to improve their resilience by enabling necessary reforms," it added.

Rating agency Icra Ltd, in a report, said that although the impact of excessive rainfall on wholesale food prices was less broad-based than feared, the double-digit inflation for condiments and spices (17.5%), pulses (13.2%) and fruit (12.6%) in March 2015 was a cause for concern.

“With the central bank likely to place far greater emphasis on the unfolding trajectory and average level of CPI (Consumer Price Index) inflation than the path charted by the WPI, which would be influenced to a larger extent by evolving trends in global commodity prices, we continue to expect repo rate cuts to be limited to 50 bps (basis points) in the remainder of this calendar year," it added.