Athens: Greece will hold a parliamentary election on 29 April at the earliest and may not hold the vote until May, a government spokesman said late on Friday, giving Prime Minister Lucas Papademos time to complete a debt deal to avert default. 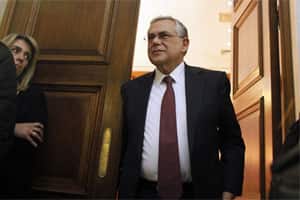 Once a deal has also been agreed on the settlement of a smaller tranche of Greek bonds regulated under international law on 12 April, the government’s work will be finished, spokesman Pantelis Kapsis told Skai television.

He said elections could take place as early as 29 April but may come on one of the following Sundays.

“I imagine it will be somewhere then," Kapsis said.

There has been widespread media speculation that the elections, delayed from February, would be held in early May but officials have been wary about commenting openly about dates.

Papademos’s technocratic coalition government, formed in November and including both the Socialist PASOK and conservative New Democracy parties, had a narrow mandate to complete bailout and debt cut talks and then hold elections as soon as possible.

Elections had been set for mid-February, mainly under pressure from New Democracy, which is leading in opinion polls.

The conservatives agreed to push back the date after it became clear that Papademos needed more time to complete negotiations on the EU/IMF bailout, Greece’s second since 2010.