Last week, to provide relief to rural households in rain-deficit areas, the Union government increased the number of assured workdays under the Mahatma Gandhi National Rural Employment Guarantee Scheme (MGNREGS) from 100 to 150. As agricultural distress interventions go, the visibility of this policy step appears to outweigh its intended outreach. The scheme, beset by payment issues, has been in decline in the Bharatiya Janata Party dispensation: only 6% of households hit the 100-day mark in 2014-15, with the average being just 40 days.

The percentage of households that clocked 100 days of employment under MGNREGS fell sharply in 2014-15. Halfway through 2015-16, with one of the two high-demand periods for MGNREGS employment completed (April-June; the other is December-March), that trend could continue. 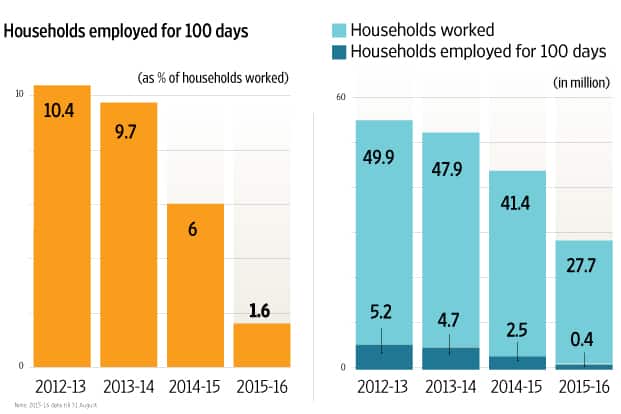 The number of individuals working under MGNREGS has been declining. As is average annual employment per household. In 2014-15, it fell to 40 days—far from the scheme standard of 100 days and the now increased limit for rain-deficit areas of 150 days. 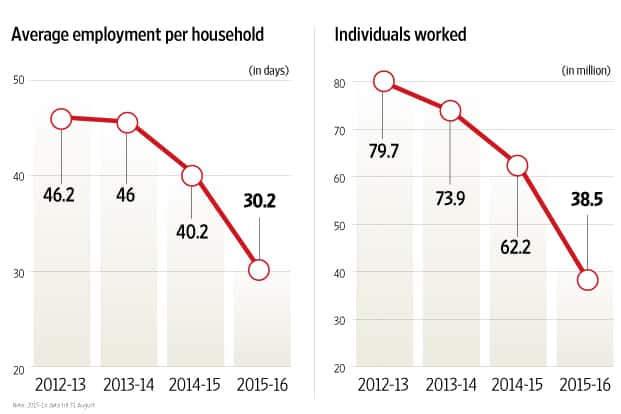 Only 27% of payments made within 15 days

One reason for fewer people seeking MGNREGS work is the delay in payment of wages. In 2014-15, the percentage of workers who received payments within 15 days nearly halved. And wage liability in 2015-16 is double last year’s amount. There are 14 states and 3 Union territories facing a rainfall deficit till September 19. Among the 11 major agricultural states in this list, only Maharashtra saw households registering 100 days of work in a year crossing 10%. But timely payment of wages was an issue for all.