Bangalore: The US defence department has pegged the potential sale of 10 Boeing transport aircraft to the Indian Air Force (IAF) at $5.8 billion (Rs25,694 crore)—which would make it the largest defence contract yet awarded by India to a US entity. 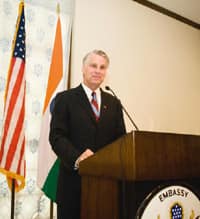 The contract, under the bilateral US foreign military sales process, would also be the largest Indian military contract won by Boeing Co. In January 2009, the firm signed a $2.1 billion deal to supply eight P-8I reconnaissance planes for the Indian Navy from 2013.

“This sale will offer economic benefits for both India and the United States and will likely include significant job creation in both countries," US ambassador to India Timothy J. Roemer said in a statement on Monday. “The actual cost will be based on Indian Air Force requirements and has yet to be negotiated," the US Defence Security Cooperation Agency said in the statement.

Boeing and its US rival Lockheed Martin Corp. are also in the race for world’s largest military tender for 126 fighters floated by IAF, estimated at $11 billion.

The C-17, which has a carrying capacity of 75 tonnes, is the workhorse of the US Air Force transport fleet and has proven its reliability in Iraq and Afghanistan.