In Delhi, making a mess of abattoir modernization

In Delhi, making a mess of abattoir modernization

Located on National Highway 24 just a few kilometres east of the Yamuna river, one of India’s most modern abattoirs in a way symbolizes the difficulties of reaching hygienically dressed meat to local consumers.

The shining new facility has the capacity to handle 5,000 small and 1,000 big animals every day—about 170,000kg of meat—but manages to process just 500 animals a day since it began operations in December.

Even when it will run optimally—not certain when, given objections raised by environmental agencies and animal rights activists—it will barely meet one-third of the capital’s daily demand of 490,000kg.

The situation is similar in other big cities across the country.

The problem of slaughtering animals in a hygienic and humane manner has gained urgency because more and more Indians are including meat in their diets on the back of economic prosperity that saw the country drive its annual GDP growth to above 8% in the past few years. 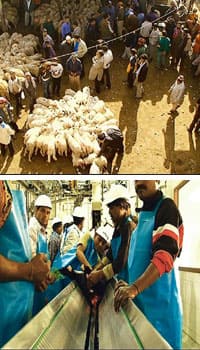 Difficult transition: Livestock market near the Idgah slaughterhouse, which the Delhi government is trying to close down (top - Ajit Kumar / Mint). Butchers from the Idgah abattoir have been trained to work in the new slaughterhouse, but many are still resisting the move to Ghazipur. Suresh Verma / Mint

Currently, neighbourhood butchers cater to most of the demand in India’s cities, and poultry and goat, preferred meats in the country, are typically butchered at small retail outlets, with little attention to hygiene.

To be sure, most of the metros have abattoirs. Delhi, for instance, has a century-old slaughterhouse in Idgah in the heart of the old city, which the city in 2005 decided to close down and build a larger one at Ghazipur.

Controversy has dogged the Ghazipur facility, which was constructed by the Municipal Corporation of Delhi (MCD) at a huge cost of Rs150 crore, right from the drawing board.

The new abattoir was scheduled to be completed by 2005, but disagreement over costs between the contractor, Food Processing Equipment Co. Pvt. Ltd, and the municipality, led to many delays.

When the slaughterhouse did become operational in December, the city was unable to find entities to run it. “Initially when we had floated the tender, not many people were excited. They said the profit margin is not much and may even be negative. That is the reason why no one came up," said councillor Vijender Gupta, chairman of MCD’s standing committee.

In desperation, the corporation signed a contract with the reluctant builder to run the slaughterhouse. Under the arrangement, the company gets Rs35 lakh per month from MCD, which collects a slaughtering fee of Rs45 for each animal.

The slaughterhouse is incurring huge losses since it costs Rs2-3 lakh a day to run the facility, according to MCD, which declined to put a figure to the deficit.

The operator is also far from happy with the arrangement. “We are an engineering company. Our scope was not to run the slaughterhouse," said managing director R.K. Saxena. “But when the MCD failed in getting somebody to run it, we were approached to take charge."

“Since there were no takers, we didn’t want MCD to strike off the entire project citing technical faults. We wanted to prove the fact that the slaughterhouse was technically sound," he added.

MCD also has till now failed to close the Idgah abattoir on the back of protests by local butchers who have refused to move to Ghazipur, which is about 20km away.

Mohammad Yunous Quereshi, a member of the Delhi Meat Merchants Association and a third-generation butcher, said the distance of Ghazipur from Idgah adds to costs of transporting animals and pares margins. Another meat seller in the Idgah area, Mohammed Arshad, said the Rs45 per animal slaughter fee, which they have to pay to MCD at Ghazipur, compared with Rs5 they pay at Idgah, is unviable and would lead to a rise in retail prices.

Local butchers question the rationale of building a new abattoir instead of modernizing the older facility. But the government held the old slaughterhouse had limited capacity, was unhygienic and located in a highly congested area.

“In the city, if you have to do something to bring about a change, certain drastic steps need to be taken, which we have taken," Delhi mayor Arti Mehra said in defence of the new abattoir.

The butchers are not the only ones dissatisfied. The Central Pollution Control Board (CPCB) has moved the Supreme Court against MCD and Delhi government saying they have violated environmental laws in setting up the new abattoir.

The system at the slaughterhouse is supposed to ensure proper disposal of animal waste. CPCB said the system followed at Ghazipur is far from satisfactory and the abattoir is yet to get clearance from the Delhi Pollution Control Committee.

A landfill site near the abattoir is a major cause of concern for CPCB. It has sought a time frame for its closure and the development of a green belt in its place. The slaughterhouse also lacks a biogas plant for the treatment of solid waste. There’s no storage space for hides and other inedible parts, and the space where animals must be rested, known as lairage, is inadequate in proportion to the abattoir’s slaughtering capacity.

Former adviser to the Food and Agriculture Organization and an expert on livestock, S.K. Ranjhan, points out that it is not enough that animals are slaughtered hygienically, the entire ecosystem, including transportation to the retail shop is important.

“What is the point in doing all this hygienically and then transporting the meat in an open transport such as a tonga or rickshaw? We should have containers, completely refrigerated and free from any contamination," Ranjhan said.

There are also issues of meeting the city’s demand. The Ghazipur abattoir cannot hope to meet the city’s demand for meat even if it works at optimum capacity. The city’s estimated daily demand for red meat is 490,000 kg. The new abattoir’s capacity meets barely one-third of the city’s requirement.

Meanwhile, the Ghazipur facility is already bypassing prescribed procedures such as resting the animals for 12 hours and examining them before and after killing, Mint found on a visit to the facility.

Animal rights activists said that no effort has been made to make the procedure less traumatic for the animals. Ambika Shukla of People for Animals said: “If the whole objective is to protect the animals against fear, that is not being done. They can see another animal being killed, they can hear another animal being killed and worse they can smell it. Animals are completely traumatized by the time they are killed."

Everyone Mintspoke with regarding the issue agreed that a new system was required, but also that the situation at Ghazipur clearly reflects the shabby manner in which government projects are executed.