The opposition parties stacked up against the Narendra Modi government during the failed no-confidence motion in Lok Sabha on Friday. Here are all the highlights from the day’s proceedings.

NEW DELHI : The first no-confidence motion against the Narendra Modi government in Lok Sabha began at 11 am today in which the National Democratic Alliance (NDA) won with a thumping majority. While 325 MPs voted no, only 126 were in favour of the no-confidence motion. Although there was little doubt in anybody’s mind over the outcome of the no-trust vote on the floor of the Lower Housebecause of the sheer number of MPs in the NDA’s kitty, the debate gave an opportunity for the opposition to attack the government on a range of issues including farm distress, slow economic growth and rising incidents of mob lynching. The 535-member Lok Sabha has 313 MPs belonging to the NDA while 222 belong to the opposition parties. Here are the highlights of the day’s proceedings from the Lok Sabha:

The opposition’s no-confidence motion has been rejected. While 325 MPs voted no, only 126 were in favour of the motion. The House has been adjourned till Monday.

Tearing into Rahul Gandhi’s comments that he was a ‘bhagidar’ (collaborator) and not a ‘chowkidar’ (watchman), Modi said he was in fact a partner in the aspirations of the people. He said he was neither a ‘saudagar’ (trader), nor a ‘thekedar’ (contractor) like the Congress. The Prime Minister said the Congress party had misused no-confidence motion to spread instability in the country to ensure that the Gandhi family remains in power.

Only electorate can make Rahul Gandhi sit in his chair: PM Modi

Dubbing the no-trust vote against his government a result of the opposition’s “arrogance”, Prime Minister Narendra Modi has urged all parties to dismiss the move and accused the Congress of working with the mindset of ‘Modi hatao’ (remove Modi). Responding to a day-long debate on the no-confidence motion, he said some people are indulging in “negative politics.” He also took a dig at Rahul Gandhi for asking him to stand up for a hug after walking across to his chair in the Lok Sabha, saying the Congress President appeared to be in a hurry to occupy his seat. Only the electorate of the country can decide his fate and make him sit on his chair, Modi said, asking “what is the hurry”.

Congress has no confidence in nation’s institutions: PM Modi

Congress has no confidence in itself; It also does not trust any of the country’s institutions like RBI and Election Commission: PM Modi

“This is not a floor test of the government, this is a forced test of Congress’s so called allies”, PM Modi says. He further added: “I appeal to all members of Lok Sabha to dismiss no-confidence motion.”

PM Modi has started his speech in Lok Sabha

He says: “For me MP is priority, seen a number of No confidence motions in last 38 years.”

Lok Sabha Speaker Sumitra Mahajan has extended the discussion by another hour. It was initially extended till 8pm but will now continue till 9pm, barring further extensions.

The BJP today termed Rahul Gandhi’s hug to Prime Minister Narendra Modi as an “immature” act and said his speech during the no-confidence motion was “low on substance” and “high on entertainment”.

Reacting to French government’s statement, Rahul Gandhi said during his meeting with the French President, Anand Sharma and Dr Manmohan Singh were also there.

Let them deny it if they want. He(French President) said that before me.I was there, Anand Sharma and Dr.Manmohan Singh were also there: Rahul Gandhi on France statement on Rafale deal #NoConfidenceMotion pic.twitter.com/c3FKz40lnj

The French government has contradicted Rahul Gandhi who said there was no secrecy pact with France that stopped the government from coming clean on Rafale jet deal. “These provisions naturally apply to the IGA concluded on 23 September 2016 on the acquisition of 36 Rafale aircraft and their weapons,” France said in a statement.

This is Lok Sabha’s 27th no-confidence motion, first in 15 years

Actress-turned-BJP MP Kirron Kher took a jibe at Rahul Gandhi over his hug act saying, he should now join Bollywood.

Rahul Gandhi should be ashamed, he can't target our ministers without any proof. He was doing drama in the house and hugging Modi ji. I think his next step will be Bollywood. We will have to send him there: Kirron Kher, BJP MP#NoCofidenceMotion pic.twitter.com/nKN1ghaB0m

BJP will move privilege motion against Congress president Rahul Gandhi in Lok Sabha over his “false allegations” during his speech today.

A wink by Rahul Gandhi after hugging PM Modi is now taking the Twitter by storm with users coming with memes.

PM Modi expected to be last speaker of the debate

After Rahul Gandhi’s aggressive speech which had its own dramatic moments, all eyes are now on PM Modi’s retort. He is expected to speak at the end of the debate.

After finishing his speech, Rahul Gandhi went to PM Modi and gave him a hug. They also shaked hands.

Indian benchmark indices BSE Sensex and NSE’s Nifty 50 traded higher as the Parliament debates the no-confidence motion brought by opposition parties against the Narendra Modi-led government. At2pm, BSE Sensex traded higher by 105.64 points, or 0.29%, to 36,456.87, while the Nifty 50 rose 38.80 points, or 0.35%, to 10,995.90. Infosys, Reliance, L&T and ICICI Bank were among the major gainers, whereas Bajaj Auto, Hero MotoCorp, ONGC and IOC were among the top losers. Click here for live market updates

During the debate, Rahul Gandhi said he can see a touch of nervousness in PM Modi, who was also in the House during the debate. “He is looking away from me. I can understand that. He cannot look into my eyes, I can see that because the Prime Minister has not been truthful,” Rahul Gandhi said. Hearing this, PM Modi started laughing.

Rahul Gandhi sought PM Modi’s statement on Rafale deal in the parliament. He alleged that defence minister Nirmala Sitharaman has spoken “untruth” on the issue.

Congress leader Rahul Gandhi started his speech by saying that TDP is not the only one who are victims of a 21st century political weapon called ‘jumla strike’. He said PM Modi works only for a handful of industrialists.

RJD’s Tejashwi Yadav says no-confidence motion is not always to take down the government. “Sometimes it is for making government provide answers to the public. If not in this session, we will try to bring it in the next session (of Bihar assembly),” Yadav said.

BJP MP Rakesh Singh said frustration and desperation are the main reasons behind this no-confidence motion.

Ananth Kumar says opposition will see strength of NDA plus

Union minister Ananth Kumar has exuded confidence that the NDA would prove its majority in the Parliament and said the opposition would see the strength of “NDA plus” during the no-trust motion.

Speaker to expunge objectionable remarks against PM Modi by TDP

Defence Minister Nirmala Sitharaman said TDP used objectionable comment against PM Modi after which Speaker Sumitra Mahajan said she will expunge any such objectionable words against the PM from Lok Sabha records. She also asked all MPs to not use such words.

TDP MP Jaydev Galla, who was the first speaker in the no trust vote debate, ended his speech after an hour. After which BJP MP Rakesh Singh started speaking against the no confidence motion. He said in his speech, the TDP MP had no substantial reason to move the motion. He also added that the issues happened when Congress government was in power.

Outside the Parliament, Congress has released a video on Twitter poking fun at the promises made by PM Narendra Modi.

Bihar chief minister Nitish Kumar has made it clear that his party Janata Dal (United) or JD(U) will continue to support NDA in the Parliament.

TDP MP Jaydev Galla hit out at both the Congress and BJP over issues related to Andhra Pradesh. Demanding that AP must be given special category status as promised, TDP blamed Congress for “mindless bifurcation” of the state. 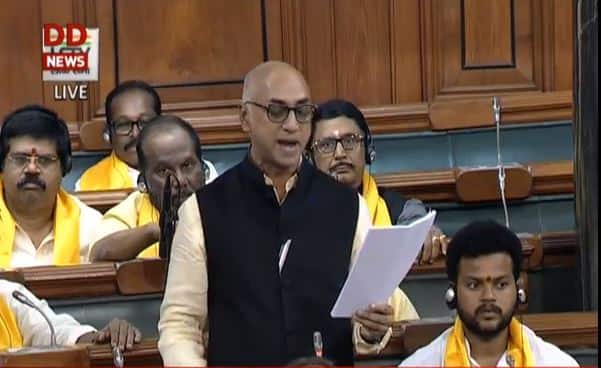 TDP MP Jaydev Galla initiates discussions on no-confidence motion saying it is a war between Modi regime and Andhra Pradesh. He said the Modi government has not fulfilled promises.

BJD walks out of Lok Sabha

BJD walks out of no-confidence motion proceedings in Lok Sabha. 20 BJD MPs will abstain from voting. In the meantime, opposition parties demand more time for discussion.

Ahead of the trust vote, PM Narendra Modi is meeting senior BJP leaders including Amit Shah and Rajnath Singh in Parliament to discuss strategy of cornering the Opposition parties.

For the BJP, the no-confidence motion is a test of loyalty towards the NDA ahead of the 2019 Lok Sabha elections. The AIADMK, for example, has hinted that it might not back the motion. Tamil Nadu Chief Minister K. Palaniswami said the motion was moved by the TDP over an issue concerning Andhra Pradesh.

Congress leader Mallikarjun Kharge questioned how can they highlight issues of 130 crore Indians and faults of the Narendra Modi government in just 30 minutes.

BJP has 3.5 hour to debate on no-confidence motion, Congress has 30 minutes

Is Shiv Sena on NDA’s side?

Shiv Sena chief Uddhav Thackeray has asked his party MPs to remain in Delhi but the final decision as to whether the party will support the Modi government against the Opposition’s no-confidence motion is yet to be announced.

Discussions will start at 11 am today. Nation is concerned about the stand of Shiv Sena. Our party will make the right decision. Between 10:30 -11:00 am, party chief will himself tell the party about his decision: Sanjay Raut, Shiv Sena. #NoConfidenceMotion pic.twitter.com/ykh4D2PN19

Stating that it is an important day in our Parliamentary democracy, Prime Minister Narendra Modi has called for a disruption-free and constructive debate in the Lok Sabha today. “I am sure my fellow MP colleagues will rise to the occasion and ensure a constructive, comprehensive & disruption free debate,” he tweeted. He said lawmakers owe this to the people and the makers of the Constitution. “India will be watching us closely,” he said.