Paris, Zurich, New York: Never before has the gap between Davos Man and the real world yawned so widely.

The top executives, financiers, academics and politicians making their way up the mountain to the World Economic Forum will be talking a lot about such non-establishment leaders as US President-elect Donald Trump—whose inauguration in Washington occurs on the event’s last day—France’s National Front chief Marine Le Pen and Italian populist Beppe Grillo of the Five Star Movement.

But they won’t be meeting them. Not one of the leaders bent on overturning the world order as Davos has designed it will be present. (A forum spokesman says an “extraordinary range" of political figures will attend —almost entirely officeholders.)

The upstarts will loom over the proceedings, though. Trump, who won’t have an official representative there, has expressed strong feelings about some of the countries sending delegations, including his own. 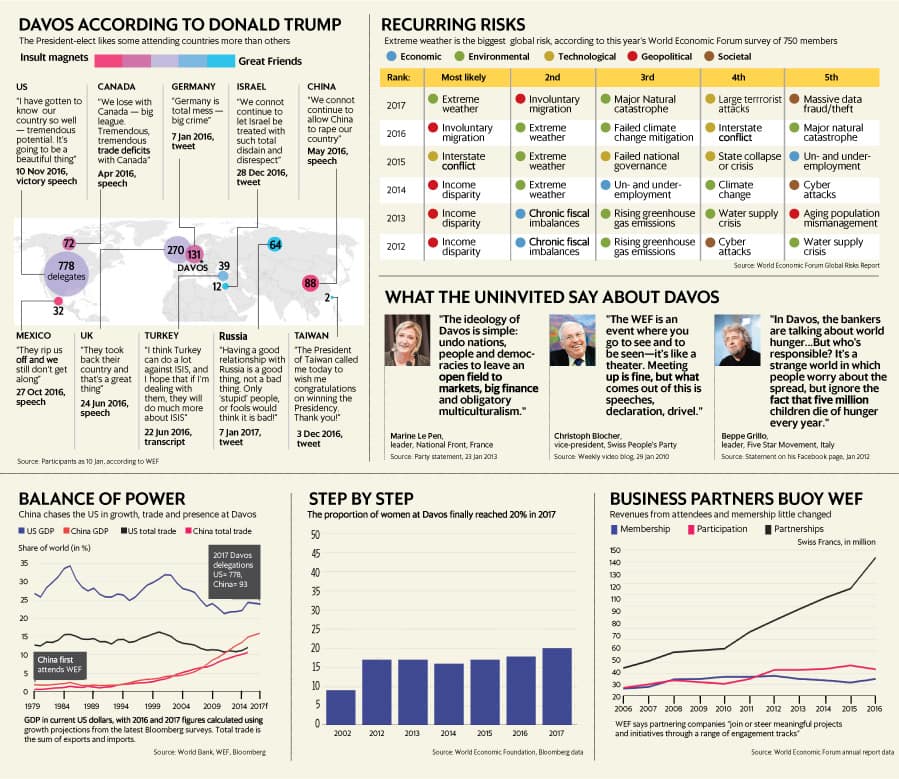 Europe’s populist leaders, for their part, have their own view of the annual gathering of the rich, the powerful, the famous and the sycophantic.

Attendees appear to be less focused on Trump’s presidency or on upcoming elections in France, the Netherlands, Germany and possibly Italy than on other global concerns. The forum’s annual survey of members on the most likely risks for 2017 found that “extreme weather events" was the top worry. “Failed national governance," the closest category to such surprise events last year as Brexit and Trump’s election, wasn’t in the top five, although it placed third in 2015.

What attendees will be paying attention to is the delegation from China, the largest yet to attend the forum. The biggest star: President Xi Jinping, the first Chinese head of state to address the gathering.

What’s not new: the share of female attendees. At 20%, it’s marginally higher than in previous years, but progress has been slow.

One thing that’s up: revenue for the WEF itself. Payments from partnerships—the corporations and consulting firms that take center stage at Davos—was up 25% over the previous year. Memberships and participation income was flat but the organization enjoyed an overall increase of 14%. Bloomberg