Jhunjhunu, part of the initial 100 districts chosen for a targeted launch of the scheme in early 2015, has catapulted from being the district with the worst sex ratio indicators in Rajasthan to one of the best, government officials claim. The 2011 Census had pegged the district’s child sex ratio at 837 girls per 1,000 boys. By December 2017, the ratio among newborns had improved to 955 girls per 1,000 boys, according to government figures.

The catch is that these figures are based on the government’s birth registration system, which is often unreliable in a country where most births are not registered. Only the upcoming census in 2021 will give a more definitive measure of the improvements since 2015, if any. But in a country where the trend for the last 50 years has been a steady decline in the ratio of girl children (see chart 1), even a marginal improvement from the status quo is significant.

Apart from the census, the other major source for evaluating social perceptions about girl children is the Sample Registration Survey, which has also shown over the past few cycles that India’s sex ratio at birth is worsening. Rajasthan’s fell from an already low 893 girls per 1,000 boys in 2012-14 to 861 in 2013-15 (see chart 2). 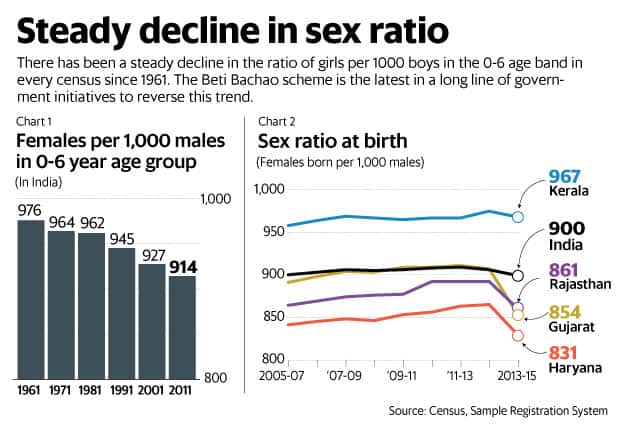 Since the ideal sex ratio at birth is 960 female live births per 1,000 male live births, a sex ratio of 861 essentially means 99 girl children are potentially being aborted. That gap of 99 fewer females for every 1,000 males would then remain through adulthood.

It is because of this prevalent reality that researchers are rather sceptical of any sudden success stories attributed to the Beti Bachao scheme. “I am suspicious of any good stories from one district," says Mary E. John of Delhi-based Centre for Women’s Development Studies. “What has happened in that district to make girls more wanted? The question to ask is—are female-child only families a genuinely possible way of imagining a family? Is it financially viable to have such a family? We have adopted an economic growth path where female workforce participation is low and women cannot find viable employment. This is the single most important factor that separates India from Bangladesh or China," she adds.

Even the recently released Economic Survey pointed towards this troubling trend, where families with girls keep having children till they have a male. The survey called them ‘unwanted’ girls and pegged the number at 21 million. A further 63 million ‘missing’ women didn’t even get the chance to be born. This is the enormity of the challenge that the Beti Bachao program faces.

As Srinivas Goli, an assistant professor at Jawaharlal Nehru University, points out, improving education levels and affluence alone have had no impact. In fact, due to the gender-excluded nature of India’s growth, they have worsened the situation. “The prevailing sex ratio among wealthy urbanites is worse than poor rural dwellers," he says.