Despite rapid progress on income and development parameters in the past decade, heights of children grew slowly, and a big contributor is sanitation

Chennai: India, which has moved up in income and several development indicators, has made very little progress in the decade between 2006 and 2016 in one key aspect: the height of children. One major reason for this is the lack of improvement in sanitation over the past decade, new research suggests. Indian children and adults, especially female and from marginalized groups, are among the shortest in the world, data from the International Demographic and Health Surveys (DHS) system show (chart 1). Unsurprisingly, India accounts for nearly a third of the world’s stunted children, and this proportion has not changed much since 2005-06.

While inter-country differences in height are often commonly believed to be on account of genetics and ethnicity, the World Health Organization (WHO) notes that “the effect of ethnic differences on the growth of infants and young children in populations is small compared with the effects of the environment". Child height is a particularly important indicator because a baby’s height has much to do with the nutrition and opportunities she has access to in early life, and is strongly predictive of cognitive development, and hence, lifelong outcomes including employment and income. A population’s height is measured in relation to what that population’s height could be in optimal conditions—optimal family health, food and sanitation. A child or adult’s deviation from that ideal is measured statistically in “standard deviations" of height-for-age or z-scores.

A height-for-age z-score of zero means that the child or adult is as tall as the average person in the healthy reference population; a negative height-for-age z-score means that the person is shorter than a healthy reference person of the same age. Stunting, the term used to describe a child or adult who is more than two standard deviations shorter than the median person in the reference population, captures the worst end of the spectrum. However, z-scores capture all the sub-optimal outcomes within that spectrum.

The average child in India was a fraction (four-tenths of a height-for-age standard deviation) taller in 2015-16 than she was in 2005-06, social demographer Diane Coffey and health economist Dean Spears found, comparing data between two rounds of the National Family Health Survey(chart 2). This pace of growth was only slightly higher than the average among sub-Saharan countries, which are poorer than India. India’s poorest states have worse child heights in 2015-16 than any country measured by the DHS system. India’s best developed states, Kerala, Goa and Sikkim meanwhile, have the tallest children of any Indian state.

So why aren’t Indians growing taller faster? Despite its economic and other successes over the last decade, India has not done well on some of the key determinants of child height, Coffey and Spears argue. Maternal nutrition, which plays a big role in the birth weight and height of the child, has a lifelong impact on the child’s health and other life outcomes. Despite improvements, three out of 10 Indian women still begin their pregnancies underweight, and half of all pregnant women in 2015-16 were anaemic.

While there have been improvements in breastfeeding rates, the dietary diversity for infants has actually worsened. The lack of sanitation and the practice of open defecation is another big driver of childhood undernutrition.

If India had halved its 2005-06 rates of open defecation by 2015-16, child heights would be one-tenth of a standard deviation better than they are, and if it had eliminated open defecation, the effect would have been more than doubled, Spears finds. (chart 4). 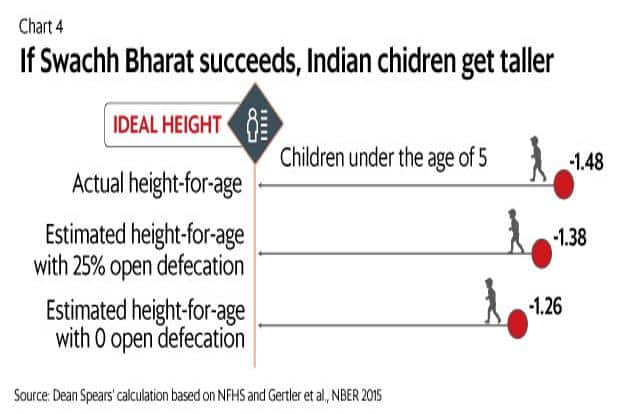 Across the world, people are taller than they have ever been, propelled by economic growth and better health outcomes. India is getting taller too, but not at the rate that its economic progress would predict.